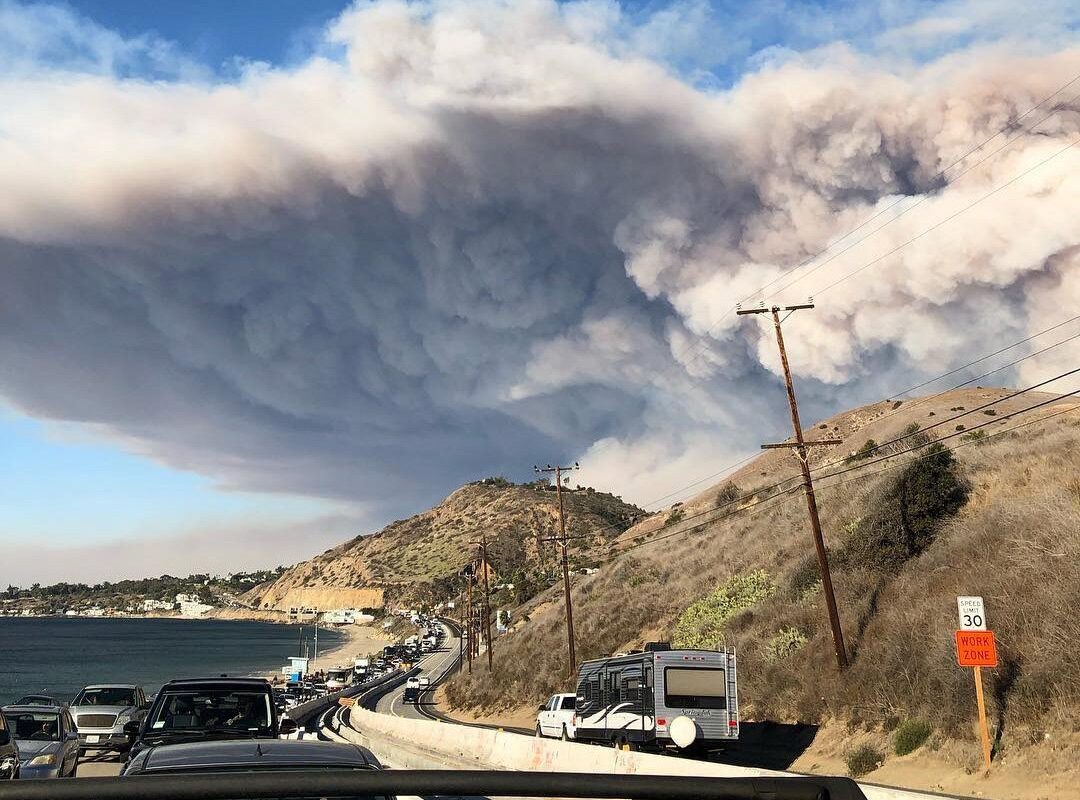 Wildfires have become an increasingly alarming problem for the western United States. Wildfires have been on the rise for over 50 years, and this trend is only expected to worsen in the future, particularly in historically susceptible areas like Southern California. This increase in uncontrolled burns will have drastic impacts on the surrounding ecosystems, and much research has been dedicated to how these large-scale infernos can affect the surrounding terrestrial and riparian ecosystems. But less attention has been placed on what happens when all that ash, smoke, and debris move down streams and slopes to eventually find its way to marine habitats. How are these western coasts and their water quality influenced by such extreme events?

Researchers set out to assess the impact of the 2018 Woolsey Fire on water quality around beaches with runoff from the wildfire area. The Woolsey fire burned nearly 100,000 acres in Los Angeles and Ventura county in November of 2018, destroying hundreds of homes and forcing hundreds of thousands of residents to evacuate. Researchers focused on the origin of the fire, the Santa Monica Mountains, and the watersheds that runoff from this area would flow through. They chose the watershed that received the bulk of the burned runoff, and an adjacent watershed that received runoff from unburnt areas, allowing comparison.

A Question of Quality

To analyze water quality, scientists focused on two standard measurements to assess the damage. First, they looked at turbidity using remote sensing data. Specifically, they measured turbidity plumes, which give an idea of how much sediment or ash is mucking up the water. The images were taken using the Sentinel-2 satellite and analyzed using ACOLITE and ArcGIS software. Further mathematical and software calculations allowed the researchers to measure turbidity plumes for each of the beaches they were studying.

The second measurement the scientists looked at was fecal indicator data, or FIB. This nasty metric is a common way of measuring water quality. The amount of fecal matter in the ocean increases during rainstorms, as poops from humans and wild animals are swept down rivers into the sea, and too much FIB will result in health departments closing beaches. However, FIB is a broad measurement of microbes indicating fecal contamination, not a direct measurement of fecal matter itself, and looks mainly at two types of bacteria: total coliform and Enterococcus. The researchers obtained FIB data from public county health sites.

Smoke on the Water

The results of this study demonstrated a significant decline in water quality during and following the Woolsey fire. The ash and debris produced from a major fire cause a lot more sediment and other materials to dirty the water, resulting in higher turbidity in the coastal regions they flow into.

Microbial contamination also saw a spike in fire-impacted regions. The FIB measurements showed significant increases during the post-fire rainstorm compared with similar rainstorms during non-fire periods. Fire-damaged landscapes may help these bacteria thrive, which further damages water quality. These impacts can persist for months or even years after the initial flow of sediment and debris, so these fires can have long-term impacts on our coastlines.

This study demonstrates how using a combination of satellite images and field sampling methods from public databases can give a clearer picture of the state of our oceans. These innovative methods will become crucial as climate change continues to make extreme weather events, like wildfires, increasingly common. As we wrap up another disastrous season of wildfires on the west coast, it is essential to stay vigilant and monitor how these infernos can influence marine environments.