Green sea turtles (Chelonia mydas) worldwide are afflicted by tumors that can impede their movement, block their sight, and prevent them from feeding. The tumors are caused by a disease called fibropapillomatosis, which is now known to be viral and contagious, especially among juvenile sea turtles. Alarmingly, in some areas 50-70% of turtles have contracted the disease, threatening the existence of turtle populations.

Previous studies show that turtles living closer to populated areas have higher rates of these tumors, suggesting that environmental stressors could make turtles more susceptible to fibropapillomatosis. In recent studies, scientists have been trying to identify which of the various stressors associated with human land use is the culprit: Could it be biotoxins arising from algal blooms caused by increased nutrients in the water, or chemical pollutants that don’t break down in the environment and accumulate in the turtles’ bodies?

In this study, Jennifer Keller and others set out to determine whether persistent organic pollutants, a broad class of chemicals released by human activities, may make sea turtles more vulnerable to contracting fibropapillomatosis. Persistent organic pollutants are chemicals like flame retardants, plasticizers, and insulators that leach out of consumer products or are emitted from manufacturing facilities, and don’t break down easily in the environment. They are hydrophobic and bioaccumulative, meaning that they are attracted to fatty tissues and accumulate readily in organisms.

Many persistent organic pollutants have been taken off the market because they are carcinogenic (cancer-causing) or immunosuppressant (weaken the immune system), but they still remain in the environment due to their persistence. Researchers have found that sea turtles, as well as many marine mammals and fish, accumulate persistent organic pollutants through their diets and through exposure to sediments. Turtles with fibropapillomatosis have weaker immune systems than healthy turtles, suggesting that some sort of stressor suppressing the immune system could increase their susceptibility to the disease.

The scientists took blood samples from 14 stranded, sick turtles and 39 free-ranging turtles that they caught along the shores of three different Hawaiian sites. The three locations where free-ranging turtles were captured had significantly different prevalence of tumors: At one site, no turtles with tumors were found, while at the other two sites, 8% and 38% of turtles had observable tumors. The stranded turtles were from a variety of locations, and they consistently showed the most severe cases of fibropapillomatosis, suggesting that the disease caused their stranding.

The sick, stranded turtles had the greatest concentrations of persistent organic pollutants in their blood plasma. Does this mean that pollutants made them more susceptible to the disease? The authors state that it is actually unlikely that the measured pollutants caused contraction of the virus, as they also found that the stranded turtles had the lowest lipid content, suggesting these turtles were having trouble finding food and hadn’t eaten recently, and so were using up their stored fat to survive. As the turtles used up their fat stores, pollutants accumulated in the lipids would have been mobilized and released into the blood. This means that increased concentrations of chemical pollutants in the blood of stranded turtles may be more a symptom and less a cause of fibropapillomatosis. However, the release of these pollutants during weight loss in later stages of the disease could make turtles sicker and contribute to their rapidly deteriorating condition.

What about the healthier turtles in the study? Pollutant concentrations were significantly different depending on where turtles were collected, but not in the way researchers had hypothesized. Concentrations were actually greatest in the sea turtles from the “low disease” site where 8% of turtles had tumors (though these turtles still had lower concentrations that stranded turtles). This site was the most densely populated by humans of the three study sites, which helps to explain greater pollutant concentrations but confounds the hypothesis that pollutants are making turtles more susceptible to fibropapillomatosis.

While this study doesn’t explain why turtles in some areas develop tumors and others are healthy, the researchers did contribute valuable new information to our knowledge of pollutant accumulation in turtles. They observed that human population density and weight loss both lead to higher concentrations of pollutants in sea turtle blood and they identified some novel pollutants that had not been previously measured in sea turtles. Their observations about varying concentrations of pollutants at the different Hawaiian sites could help to determine sources of these contaminants.

Additionally, the team detected some compounds in the turtles that look like contaminants but may actually be natural products produced by algal species that the turtles eat. Concentrations of these compounds decreased in the blood plasma of turtles that exhibited weight loss, while persistent organic pollutants increased. 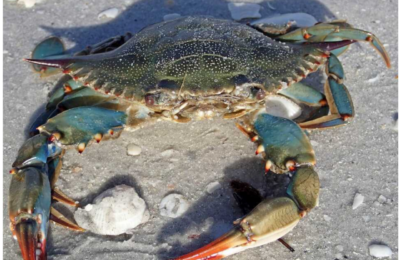 One thought on “Why Do Sea Turtles Get Tumors?”