As you may have learnt from previous OceanBites posts, plastic debris are ubiquitously present in the world’s seas and oceans. The distributional pattern is shown in Fig 1.  Plastics tend to accumulate in the convergence zones in subtropical gyers. The amount of plastics in open-ocean surface waters is estimated to range between 7,000 and 35,000 tons.

The predominant ocean surface plastics are those smaller than 1mm in diameter (so-called microplastics); and therefore, marine organisms can ingest them easily. The plastics not only block the digestive tract but also have the potential to enter the circulation system. Microplastics also carry organic pollutants, incorporated either during manufacture (e.g. polybrominated diphenyl ethers) or from sorbing the surrounding water (e.g. polychlorinated biphenyls) to organisms.

Seafood is an important part of people’s diets worldwide, so it is crucial to understand the presence of microplastics in seafood. Van Cauwenberghe and Janssen chose to study the mussel Mytilus edulis and the oyster Crassostrea gigas because of their filter-feeding behaviors.

Scientists purchased mussels and oysters from German farms and French supermarkets, respectively.  Upon arrival at the lab, scientists divided the organisms into two groups. One group went straight to extraction, while the other was treated with clean water for three days to clear their gut.  Microplastics were then analyzed using a microscope.

Spectroscopic analysis was used to prove the microparticles were truly microplastics. Dye studies reveal that the pigment concurrent with the particles are most commonly used in plastics industry, indicating anthropogenic origin.

Why we are concerned?

“How Much Garbage is in the Great Pacific Garbage Patch?” – Carrie McDonough

“Life in plastic, it’s fantastic – for microbes in the plastisphere.” – Cathleen Turner

“Increasing fiber in your diet… microplastics fiber, that is.” – Erin Markham 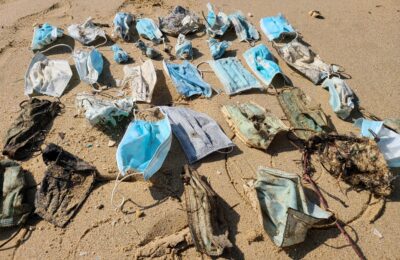