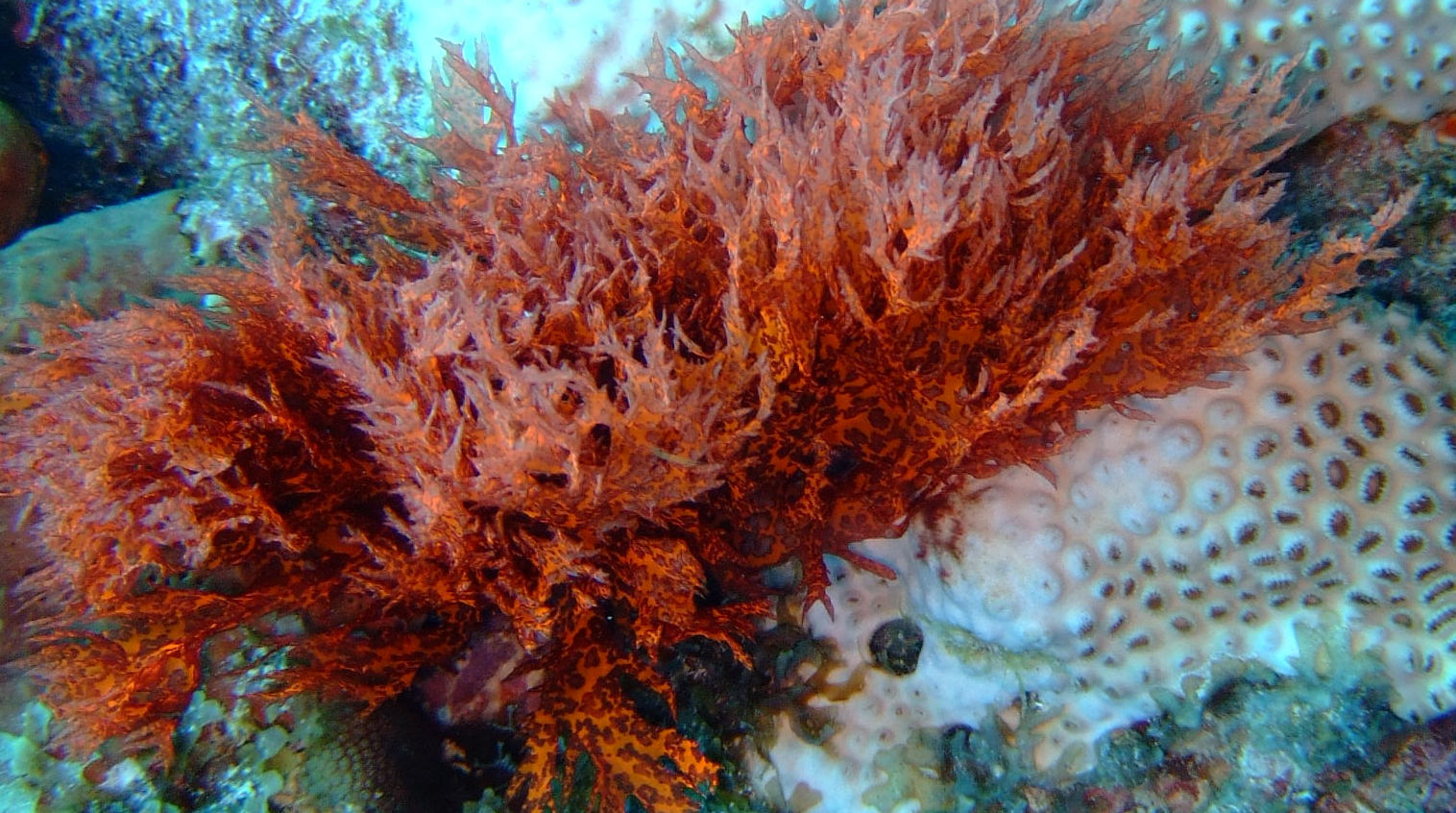 Excerpt: In many ways, coral reefs are the Goldilocks of the ocean. But as climate change shifts conditions near many of the planet’s reefs, finding “just right” may be increasingly difficult. Researchers at UCLA set out to explore how one expected outcome of climate change, extreme rainfall events, may impact coral reefs in the future.

Dr. Camille Gaynus earned her undergraduate degree majoring Marine and Environmental Science at Hampton University. She solidified her love for the ocean and marine biology with a trip to Bali, Indonesia, then earned her PhD in Biology at UCLA in the Fong lab, where she focused on turf algal growth on coral reefs in Moorea French Polynesia. She is currently a Postdoctoral Research Fellow at the University of Pennsylvania.

In many ways, coral reefs are the Goldilocks of the ocean. A healthy reef needs a balance of light and nutrients (nitrogen and phosphate, basically food for algae). Too much and the bright corals may bleach or get overgrown by algae. But as climate change shifts conditions near many of the planet’s reefs, finding “just right” may be increasingly difficult, even in places where reefs have thrived. Researchers at UCLA set out to explore how one expected outcome of climate change, extreme rainfall events, may impact coral reefs in the future.

Of Rain and Reefs

Rain and coral reefs are more linked than it would first appear. Rain carries dirt and nutrients either directly into the sea or into rivers, which then make their way into the ocean. It is one of the strongest connectors between land and sea. However, humans are able to change the way that rain runs over land in a number of ways. Deforestation loosens soil, making more pathways for rain to flow to the sea. In a similar way, urbanization and paving over more permeable soil makes it so that the ground cannot absorb as much rain. When this happens, there is even more runoff from land to the water (and also higher risk of flooding – a big problem for many major cities). Finally, with agriculture, we place a lot of nutrients into the soil to help crops grow. Any excess nutrients left in the soil can then be flushed into the ocean, sometimes with disastrous effects (see dead zones). Commonly, excess nutrients cause a localized boom of algae – with more food, algae have more opportunity to grow and reproduce.

Corals are a lot like sea anemones, with friendly algae living in their tissues and a hard limestone skeleton protecting their fleshy insides. Although corals can get food from animals in the surrounding water, the algae in their tissue (called zooxanthellae) make food that the corals need through photosynthesis. Because of this, corals need sunlight. If a lot of sediment is swept into a reef, it can stay suspended in the water, making it cloudy and blocking sunlight. If there are too many nutrients, then larger, leafier algae can grow on top of corals, choking them and once again blocking sunlight. If these conditions last too long, the corals will die.

The researchers at UCLA wanted to find out how much this extreme rain changed water clarity, how many nutrients it flushed into the water, how long that nutrients stayed there, and how effectively the local turf algae took up the nutrients as food. They saw an opportunity in January, 2017 in the form of 10 exceptionally rainy days in Moorea French Polynesia. Following the storm, the scientists took to the water of Cook’s Bay, armed with secchi disks to measure water clarity, bottles to grab water samples to test sediment for nutrients, and hands to grab tissue samples from the algae Padina boryana.

The scientists found a large plume of sediment that originated at the mouth of the river then steadily flowed out to sea, disappearing after nine days. They found a similar pattern in both phosphate and nitrogen concentrations. However, the sheer amount of phosphate and nitrogen was striking. Some of the samples contained 27 times more phosphate than usual, and nitrogen was roughly 116 times higher than normal. This intensity had mostly abated 9 days after the storm, but overall the heavy rain caused a profound flux of both sediment and nutrients into Cook’s Bay and the resident coral reefs.

The algae had the highest concentration of nitrogen in the day immediately after the storm, although the concentration declined over the next ten days. However, using isotope analysis, the scientists were able to see that the algae had a higher ratio of N15, meaning the nitrogen may have come from a different source than usual. N15 is a nitrogen atom that has one more neutron than the comparatively light N14. Tiny bacteria, rather like tired graduate students, prefer to do less work for their food and will select N14 over the harder to digest N15. It’s like finding leftovers in the fridge as opposed to a meal you have to cook. The fact that the macroalgae had a higher ratio of N15 suggests that the nutrients they captured may have come from sewage, where bacteria were (less) hard at work digesting N14.

The impacts of the rain were intense, but fleeting. Within 10 days, the majority of the immediate changes from the sediment and nutrients had dissipated. However, it is this fleeting nature that could potentially dictate the species of algae that grow on reefs in the future. Algae that can quickly consume nutrients will have an edge over algae that grow more slowly.

The amount of nutrients flushed into Cook’s Bay was also particularly large, not just compared to normal levels but also when compared to other rivers. The sediment carried a lot of nitrogen, equal in magnitude to the Mississippi River- a massive river that flows out into one of the ocean’s largest dead zones. The way the land is used may play a large role in this. Those living around Cook’s Bay largely rely on septic tanks for sewage, which leach nutrients into the ground, but nearby goat farms and pineapple fields could also enrich the soil.

Climate change is expected to increase the number of extreme rainfall events in wet, tropical regions like French Polynesia. This will drive nutrients to the coast, which can help algae grow on coral reefs. If this becomes a problem, scientists and law makers may be able to alleviate some of these impacts by looking at how we use land. In the meantime, we need more field studies looking at the connections between rain and reef.