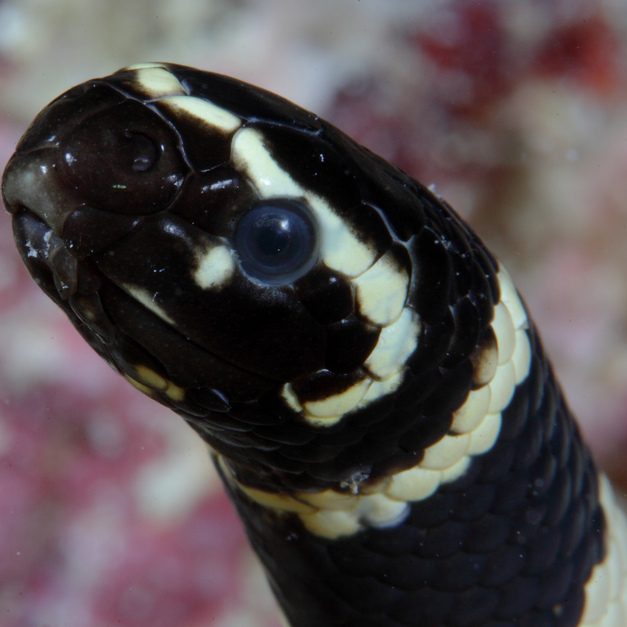 Melanistic colour morphs are found in a variety of vertebrates, like big cats, birds, and reptiles. Melanin is a dark pigment key for determining the colour of many body parts, including human skin. Sometimes these dark colour morphs are adaptive, allowing darker creatures to blend in with their surroundings. Since melanin also helps block UV radiation, dark colour morphs may also have some advantages in immunity and stress resistance. Other times, melanism can be very dangerous – a black arctic hare would attract an awful lot of attention from predators on the snowy tundra.

Beyond natural variation in colour morphs, an increased incidence of alternative colours morphs may be another avenue for populations to cope with human influences. Industrial melanism is a well-known phenomenon, especially in invertebrates, where animals from polluted or contaminated sites tend to be darker than animals from clearer, less impacted sites.

The most famous example of industrial melanism comes from the peppered moths of the United Kingdom. Prior to 1811, virtually all peppered moths were a dappled gray colour, allowing them to blend into the lichens on tree trunks. With the onset of the industrial revolution, the English countryside became blanketed with black soot from the new coal-burning factories, leaving the pale gray moths exposed to predators. By 1895, melanistic, jet black peppered moths almost completely outnumbered the original light-coloured moths. But over time and with the adoption of cleaner air standards, the original gray colour morph had started to make a comeback.

Unlike other groups of animals, melanism in reptiles is usually related to temperature instead of pollution. Reptiles from cooler places tend to be darker so they can trap more warmth from the sun when basking. The turtled-headed sea snakes (Emydocephalus annulatus) of the inshore bays of New Caledonia appears in both melanistic (dark) and banded (striped) colour morphs, and people working in this region knew that different sites on the island had more or less jet black sea snakes. However, no one had ever attempted to rigorously investigate whether the frequency of dark morphs changed from around the island, or related these different colours morphs to the ecology of the sea snakes.

Since the tropical waters of the Pacific act as an excellent insulator for these snakes, dark colour morphs would likely reap few benefit for thermoregulation. A team of researchers from New Caledonia and Australia investigated whether the anecdotal differences in melanism across the turtle-headed sea snake population were related to environmental pollution, as had been observed in other vertebrates.

First, they catalogued the sea snake colour morphs across their geographic range, using both field observations and museum specimen collections. Melanism was common in sea snakes from urban-industrial sites within New Caledonia and in a remote Barrier Reef atoll once used as a bombing range in Australia. The melanism rates ranged from 50% to 100% of snakes in industrial sites, and never exceed 45% of snakes recorded in in non-contaminated sites. Melanistic sea snakes also used the same habitat as typically banded sea snakes, suggesting that melanism itself was not an adaption for predator avoidance or mate choice, as has been suggested in animals such as squirrels and coral snakes.

After confirming that sea snakes were generally darker in contaminated sites than in clean sites, the next step was to try and pin down mechanisms of how darker skin could help snakes with contaminants.

The scientists hypothesized that melanism may help sea snakes cope with life in urban-industrial areas by enhancing their ability to trap and dispose of trace-element pollutants. By quantifying the amount of trace elements in both dark and light patches of sea snake skin, and the rate at which snakes shed their skin, they determined not only how much pollution was trapped in the skin, but also how the snakes used shedding their skin as a way of getting rid of built up contaminants.

The shed skin of sea snakes from contaminated sites contained more trace elements, like cobalt, copper, cadmium, arsenic, nickel, than the skin from clean site snakes, confirming that animals from industrial habitats were exposed to more contaminants than snakes from clean sites. Interestingly, dark areas of skin, even on snakes with a typical banded pattern, contained higher amounts of trace elements than light areas of skin.

Even though sea snakes were most commonly exposed to them through ingestion of prey, the contaminants appeared mostly in the melanin-rich dark skin. Important for coping with pollution, sea snakes with large patches dark skin shed their skin more often, allowing them to get rid of the accumulated contaminants more easily.

Skin shedding in these snakes is typically induced by algal fouling, as algal spores preferentially settle on dark substrates. It is possible that snakes with large patches of dark skin are healthier overall, and have more offspring, since they are able to minimize the effects of these pollutants on their physiology by frequently shedding their skin. This could lead to the difference in colour morph distribution across New Caledonia, similar to what happened to the English peppered moth population during the industrial revolution.

The changing face of sea snakes

The incidence of melanism is higher in habitats where sea snakes are exposed to greater levels of industrial contaminants. Darker skin accumulates contaminants better than light coloured skin, and is sloughed off more often, minimizing chemical stress on sea snakes from polluted environments. Though there may be other factors at play – for example, melanin is associated with increased immune function, which may be advantageous in an environment with increased levels of chemical stress – it seems that human influences continue to impact the ways – and looks – of the natural world.