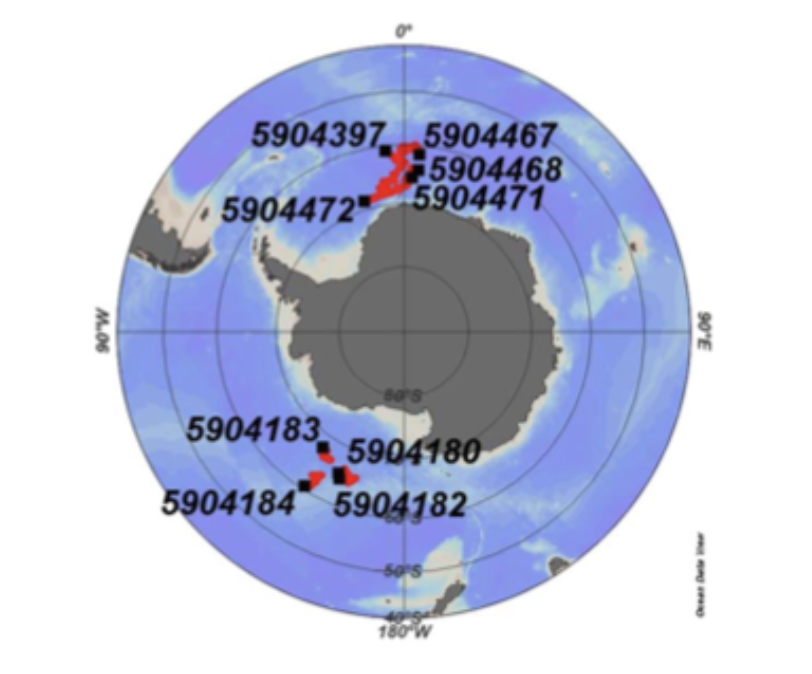 The ocean stores a massive amount of carbon and the Southern Ocean, which surrounds Antarctica, is said to take up 50% of  human carbon dioxide emissions. One active area of research is trying to better understand how much carbon ultimately sinks to depths where it is stored anywhere from months to millenia through a series of processes called the biological pump. The biological pump is when phytoplankton, tiny ocean plants, use nutrients and sunlight to convert carbon dioxide that dissolved into the ocean into organic matter. This organic matters sinks when phytoplankton die and clump together or when tiny ocean animals called zooplankton eat the phytoplankton and produce fecal matter. Estimates of ocean carbon export range from 5 to 13 Petagrams of carbon per year (That’s like multiplying 13 by ten 15 times!). This huge range of estimates means that we still have some serious work to do to figure out how much carbon is sinking into the deep ocean.

Biogeochemical ARGO floats are one type of marine robot that are used to estimate carbon uptake in the Sourthern Ocean. ARGO floats are autonomous, which means that they move about freely in the ocean detached from the ship. The floats sink to ~1000 m in the ocean and park there for about 10 days. Then they sink even further to 2000 m and once they reach 2000 m they float back up to the surface collecting data along the way. When they reach the surface they transmit their position so we know where they are. While it is counterintuitive for something to float at depth if it is also buoyant at the surface, these robots make it happen by adjusting how dense they are. They pump oil in and out of an external bladder to become more or less dense. Biogeochemical ARGO floats are spin-offs of typical ARGO floats that operate in the same manner, but collect much more data.  They measure how acidic the water is, how much oxygen and nutrients there are as well as how much chlorophyll there is. Chlorophyll is found in all plants, so we can use it to figure out how much phytoplankton activity there is. Figure 1 shows a picture of an ARGO float.

If you want to learn more about biogeochemical ARGO floats, you can visit this page for more information http://biogeochemical-argo.org/ and you can even see where all of the floats have been using this interactive map tool because all of the data is freely available to the public https://www.mbari.org/science/upper-ocean-systems/chemical-sensor-group/soccom-float-visualization/

Briggs and co-authors used biogeochemical ARGO float observations from within the seasonal ice zone to learn about biological activity in this region. The seasonal ice zone is defined as the area where ice exists year-round to the point where ice extends farthest during the winter. Normally sea ice prevents sunlight from reaching phytoplankton, limiting their growth. Since the floats were collecting data between March 2014 and January 2015, they were able to observe a full annual cycle of sea ice.

Figure 2 shows the locations of the nine floats used in this study and the paths that each float travelled while it was deployed in the water. This allowed the researchers to compare the presence of sea-ice to plankton productivity. The main measurements used to study the biology were oxygen, nutrients and how acidic the water is. However in order to do so, the researchers used a model to separate how measurements would be affected by ocean physics.

The key observation of this study was that spring phytoplankton blooms were found in data from all 9 floats when the sea ice melted. There is more productivity when there is less sea ice because as the ice melts, phytoplankton will experience enhanced nutrients and light availability. Briggs and co-authors determined this by observing increasing oxygen concentrations over time due to photosynthesis. This result was also supported from observations of decreasing dissolved inorganic carbon once the ice melted. The dissolved inorganic carbon measurements were derived from combinations of ocean acidity measurements with temperature, salinity and oxygen measurements. Dissolved inorganic carbon is used by phytoplankton for photosynthesis, so if there is less in the water it means that it is being used up over time for biological production.

During times when there was ice cover, they found that there was a net loss in oxygen over time due to biology. This means that there was more respiration occurring than photosynthesis, so animals, zooplankton, were eating the phytoplankton and respiring, using oxygen and producing carbon dioxide. This makes sense because the ice would block light from the phytoplankton preventing photosynthesis. Similarly, a respiration-dominated area would have increasing dissolved inorganic carbon because during respiration carbon dioxide (an inorganic form of carbon) is released by zooplankton. Figure 3 shows both the trends in oxygen and dissolved inorganic carbon when there is ice cover and how the trend shifts in the opposite direction once the ice melts.

Also key to their observations was that one float left the seasonal ice zone and did not observe the bloom, which further supports their evidence that the melting of ice promoted phytoplankton blooms. This is an important finding because phytoplankton are the basis for the biological pump. With more biological activity comes the opportunity for more carbon export to depth where it will be stored for long periods of time!

Overall, this study uses an exciting dataset to have a full year’s worth of data in the seasonal ice zone. From this data, researchers were able to gain insight about the respiration that occurs beneath the ice and the shift to photosynthesis that occurs when the ice melts. Since this was just an initial look at the Biogeochemical ARGO, many more studies are likely to come from this rich dataset. As more floats are deployed in the future, more can be learned about the biological pump and the ocean as a carbon sink.