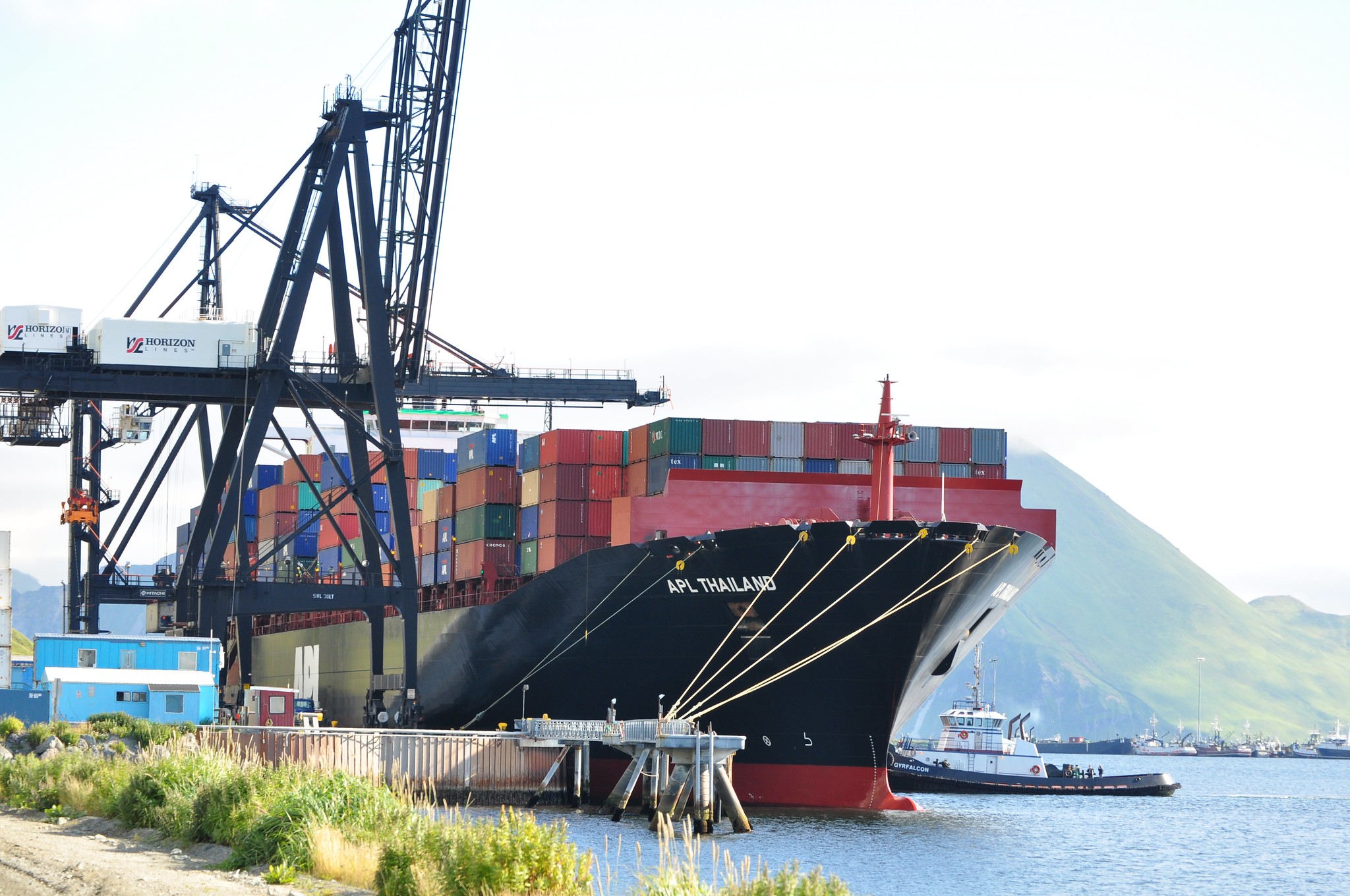 Accounting for more than 80% of world trade, the global shipping network (GSN) is the primary transportation system of goods globally. The GSN is a known contributor of non-indigenous species (NIS) invasions. The primary mode of NIS introduction (via shipping) is through ballast water exchange. The word ballast refers to any material brought on board a vessel to regulate buoyancy and stability. Cargo ships are built to be buoyant when fully loaded; therefore, when they are unloaded they must be filled with a different material (ballast) to offset the weight loss and maintain proper buoyancy, or trim. Prior to 1880, ships used solid ballast materials such as rocks and sand that had to be shoveled onboard by hand. Water pumps allow ships to easily and efficiently load water into the hull as cargo is removed. The downside is that pumping in water from the surroundings also brings in small organisms (and larvae), and when the ballast water is released at the next location, so are all of the organisms. Biofouling is the second most common mode of NIS ship transport. Biofouling is the accumulation of organisms on a surface such as a ship. Common fouling organisms include algae, seaweed, coral, mussels, and barnacles. Together, ballast water and biofouling account for 60-90% of marine bioinvasions. A less common source of marine NIS movement is within shipping by-products (e.g. in seaweed that lobsters are packed with), but this is a much larger source for terrestrial NIS (e.g. insects in fruit containers shipped from tropical locations).

Although NIS’ are constantly being transported and released around the globe, they do not become invasive (a.k.a. alien)  immediately upon release. A species invasion occurs when an organism is transported into a previously uninhabited area, establishes a population, and experiences population growth to a point that allows the NIS to cause detrimental effects (on the habitat and/or native species). For this to occur the organisms must be able to survive the environmental conditions of their new habitat, take advantage of available resources (food and shelter), and establish a successful breeding population. Generalist species, those with a wide non-specific diet, are typically the most successful (e.g. the European green crab).

Climate change is expected to alter species distributions and NIS invasion risk. Previous studies seeking to forecast invasion probability make the assumption that shipping traffic will remain constant. This is an unrealistic assumption considering past growth, from 1992-2012 shipping traffic quadrupled. Growth is spatially non-uniform, largely due to socioeconomic factors. A country’s need, or desire, to import goods increases with population and economic growth. Areas that experience economic growth would, therefore, be expected to see a surge in shipping traffic and invasion risk. Northeast Asia is one such example, with a GDP projected to increase 21X by 2050, they will likely become an invasion hotspot. 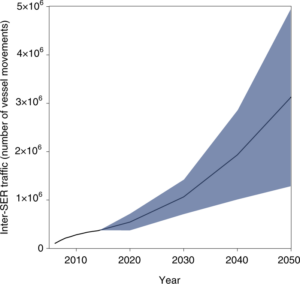 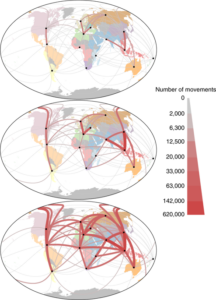 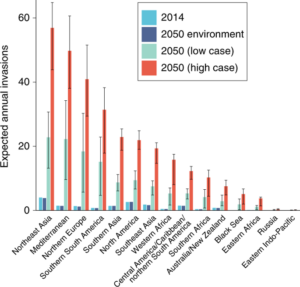 This study utilized global shipping data from over 50 million ship voyages across 9 years to determine whether increased shipping traffic would have an impact on the NIS invasion risk. As expected, the model found that ship traffic and invasion risk would increase substantially, ~200-1200% and 3-20X higher respectively, by 2050. Shipping traffic was most highly correlated with GDP and regions with large, fast-growing economies had the highest risk. The GSN was found to be the driving factor of invasion risk, over environmental change.

Research of this nature, which provides quantitative estimates, is imperative for mitigation and conservation efforts. Environmental protection plans require that we have relatively accurate estimates. Imagine there was a tiger on the loose in North America – likely, this would pose a relatively minimal risk and effort to contain. Now imagine {somehow} 1,000,000 tigers were released in North America. Now, the chances of containment are significantly lower, while the chances of breeding AND risk to human health are both significantly higher! One vs. a million has a dramatic effect on how we prepare for and manage non-indigenous species invasions; therefore, quantitative, reliable estimates are critical for conservation and mitigation efforts.

An increase in shipping (1200%), invasion risk (20X), and colonization potential (warming climate) add up to a daunting challenge for conservation biologist; but, there is power in knowledge. Already, efforts have begun to reduce the risk of NIS invasions from the worst offender, ballast water. The Ballast Water Management (BWM) convention is an international maritime treaty aimed to prevent ballast-mediated bioinvasions. Current guidelines dictate distance from shore and amount of ballast that can be exchanged. The BWM has mandated that all ships must have approved water treatment systems by 2024. With previously introduced NIS’ having detrimental impacts on local habitats (e.g. Lionfish), governments are recognizing the need for regulations that help reduce risk.

How can you help?

One thought on “Shipping traffic increases risk of alien invasion”