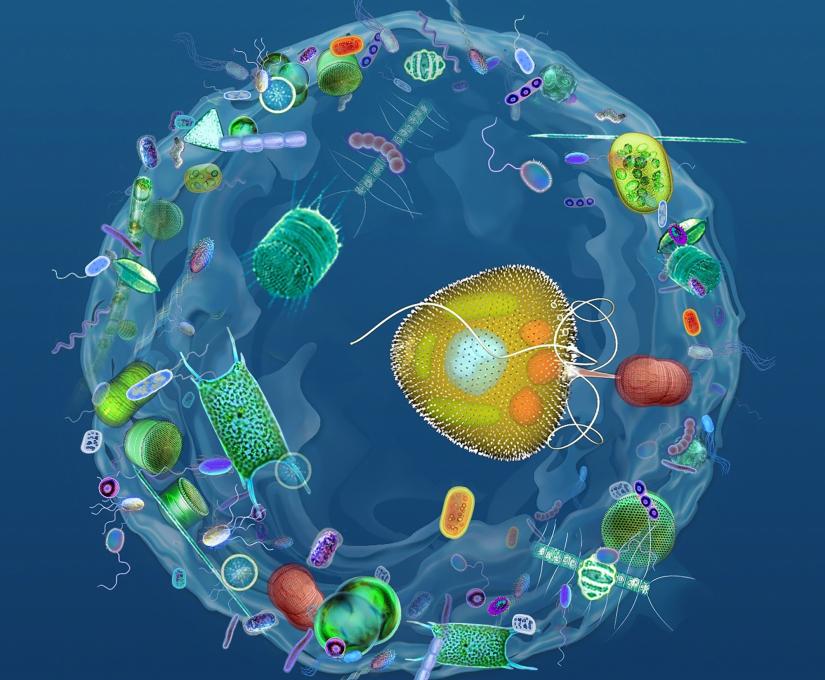 This mucus-making microbe deploys a snotty strategy for cycling carbon in the ocean.

The ocean stores a lot of our carbon—it absorbs around 25% of our carbon dioxide emissions. Photosynthetic microbes known as phytoplankton facilitate this absorption by fixing carbon dioxide into organic carbon. Organic carbon – unlike carbon dioxide – is a form of carbon that’s useable by most other organisms. When organisms die or defecate, the remaining carbon sinks down to the deep ocean, where it can be stored for long periods of time. In this picture of biological carbon transfer, there are two types of organism: autotrophs—those that can produce organic carbon themselves like phytoplankton, and heterotrophs—those that can’t, and must derive organic carbon from other organisms (like zooplankton or fish). But biology defies simple classification: sometimes there are organisms that can do both.

Researchers from the University of Technology Sydney discovered a new marine microbe that adds a new dimension to this process. Part of the group of single-celled eukaryotes known as dinoflagellates, the newly-described microbe (Prorocentrum balticum) is a mixotroph: it both photosynthesizes and eats other microbes. Its versatility might allow it to thrive where autotrophs cannot— autotrophs need to absorb dissolved nutrients, while P. balticum can simply consume other microbes for nutrients instead. Swathes of ocean are too nutrient poor for phytoplankton to thrive, but P. balticum seems to be ubiquitous, with a geographically extensive range that covers a diverse range of ocean environments. Researchers suggest that this implies the ocean is a larger carbon sink than previously thought, as the roles of non-phytoplankton microbes are not often accounted for in models of carbon sequestration.

Got it in the (mucus) bag

Being a mixotroph isn’t particularly unusual for a marine microbe. After all, it’s a competitive ocean out there, and it pays to be flexible. But P. balticum quite literally has this strategy in the bag —to capture prey, it crafts a pouch-like mucus apparatus that it shapes into a three-dimensional sphere. It entraps other microbes in the sticky sphere, often capturing multiple microbes simultaneously and even immobilizing prey up to 6 times larger than itself. This elaborate trap might seem like a spider’s web, but it’s more than a means of passively intercepting unwitting prey. The mucosphere, as the researchers term the apparatus, appears to actively attract prey— microbes swam towards chemical extract from the mucus, suggesting that it has chemoattractive properties—a surprisingly sophisticated, snotty strategy for a single cell!

P. balticum doesn’t often finish its food—it often discards the mucosphere though it’s still laden with trapped microbes. The heavy sphere sinks and becomes part of the carbon exported to the bottom of the ocean. Mucosphere contributions to carbon export are significant— researchers estimated that P. balticum, as a single species of microbe, could contribute about 0.1-0.7% of total carbon export from surface waters. Though less elaborate, other dinoflagellates also make mucus structures to catch prey—this mucusy mechanism might be a common but often overlooked microbial contribution to the carbon cycle.

This new form of carbon transport might expand the ocean’s natural capacity for carbon storage—an intriguing possibility for researchers who think it might represent a nature-based solution to mitigate the impacts of climate change. Though more work needs to be done before any solutions are implemented on a large scale, it’s clear that the microbial role in the biological cycle of carbon is diverse and complex, and certainly not to be sniffed at.