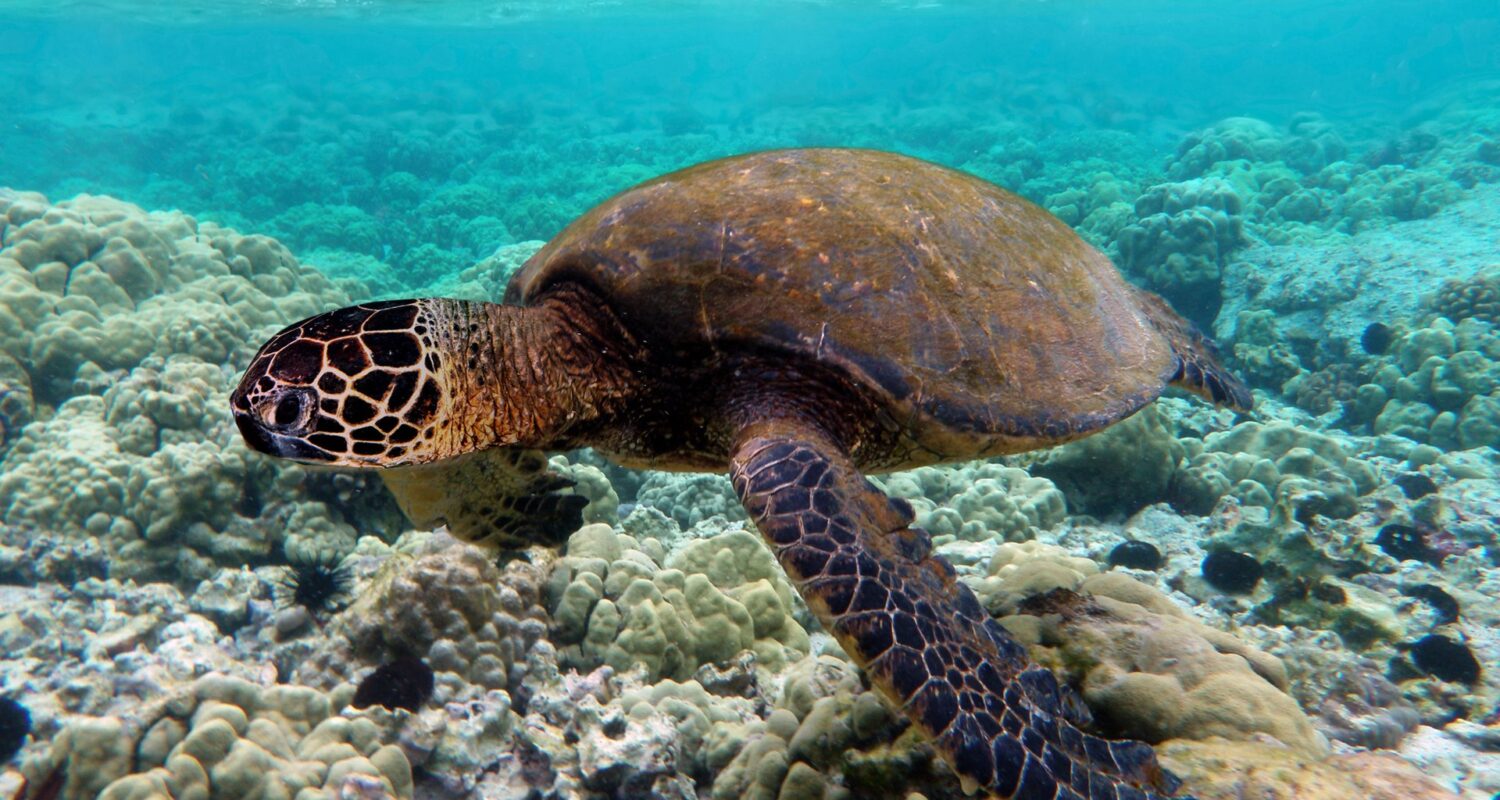 Exploitation and Conservation of Marine Species

Many marine species, such as whales, sharks, sea turtles, and seals, have been subject to high levels of exploitation by humans. Although progress has been made to reduce this exploitation and give species a chance to recover, monitoring of species’ recovery is not usually very well documented. Inconsistent monitoring of population size can lead to a species being classified as “Data Deficient” on the IUCN Red List, which reduces the effectiveness of conservation and management efforts.

Green turtles, Chelonia mydas, are one such species that have experienced high levels of exploitation throughout the late 19th and early 20th centuries, which led to worldwide declines. Green turtles used to be killed in high numbers for their meat or to supply shells to the wildlife trafficking trade, and they are still subject to this exploitation in some areas of the world. However, green turtles today are special in that they are part of the longest continuous protection for green turtles in all of the Western Indian Ocean. Beginning in 1968, a total ban on green turtle capture at the Aldabra Atoll in southern Seychelles was enacted. Since then, the turtles of Aldabra Atoll have remained largely undisturbed in one of the most successful protection efforts for a species in the world.

When the ban on green turtle capture was put into place in 1968, researchers also began doing regular track count surveys, which were standardized in the 1980s. Track count surveys provide a way of estimating the number of nesting females in a turtle population by counting the number of turtle tracks with digging (which indicates that the female dug to lay her eggs) on a beach. Aldabra Atoll is one of the world’s largest raised coral atolls and has a total of 52 turtle nesting beaches on its outer perimeter. These 52 beaches were each assigned to one of six groups to make reporting of track counts easier to categorize.

Over 50 years of monitoring turtle tracks with digging on Aldabra Atoll has allowed a substantial record of green turtle recovery since their protection was enacted in 1968. The green turtles of Aldabra present a unique opportunity for helping us understand the positive impact that strong protective measures can have on a species and for learning how a species recovers after extreme exploitation.

Researchers used the 50-year record of track data to investigate green turtle recovery on Aldabra Atoll and found some happy news: there has been a nesting clutch increase of around 600% over the 50 years of Aldabra’s protection. The track records indicate that annual clutch numbers averaged around 2,000-3,000 clutches in 1968 and increased to over 15,000 clutches by 2019. Since female turtles usually lay 3-5 clutches, 15,000 clutches suggests an average of about 3,000-5,000 nesting turtles on Aldabra in 2019. This is compared to somewhere around only 400-700 nesting turtles on Aldabra in 1968.

The researchers also noted that the largest clutch increase, from 264 in 1980 to 3,618 in 2019, occurred at the Settlement Beach group, which was historically the most exploited beach group on Aldabra. This represents an increase of 1,271.2%. Settlement Beach now produces 24.6% of the atoll’s overall nesting attempts, which is the greatest contribution from any of the six beach groups monitored. It’s safe to say that 50 years of protection have had a considerable impact on green turtles!

Better yet, green turtle population is expected to continue to rise for many years to come. Historical data, although not well-documented, estimate that turtle numbers at the turn of the 20th century were around 6,000-8,000 nesting turtles on Aldabra. This means that while green turtle populations have increased a substantial amount since 1968 (from around 400-700 nesting turtles in 1968 to 3,000-5,000 in 2019), they are still only half as many turtles on Aldabra than there would have been before exploitation began. While this means that turtle populations are likely to continue to grow, there are other factors caused by climate change, such as reduced seagrass and algal availability at turtle feeding sites, rising sea levels causing reduced beach area for nesting, and increased intensity of storms that damage habitats, that are expected to have negative effects on green turtle populations. The impacts of these factors, however, are still largely unknown and more research is necessary.

Even with uncertainty around how green turtles will fare as global climate continues to change, this study provides hope for the benefits of long-term protection of a marine species. Similar protection measures could be applied to other depleted populations, and hopefully this study will inform future successful conservation initiatives.