We don’t often think about starfish as survivors of an arduous journey across the open ocean. When we encounter them, they look relatively sedentary, moving slowly in the calmness of a tide pool or along a smooth seafloor. But did you ever wonder how it is that these slow-moving creatures can be found spread across such large areas? It’s because they spend the first two months of their lives drifting far and wide in ocean currents. Starfish are spawning reproducers, meaning the adult male and females release millions of their reproductive cells into the water, and the few that unite form starfish planktonic larvae. Think of these larvae as equivalent to human embryos, except that, instead of being kept safe inside their mother’s womb, the larvae are left to their own devices, drifting around in the open ocean. Being “planktonic” means that they’re drifters. The larvae are capable of moving small distances on their own, but they are swept along when a strong current comes by.

As starfish larvae move along, largely at the whim of the ocean currents, they metamorphose into their adult forms over a period of 60 days. Toward the end of their journey, they find a nice solid home and settle down into it as miniature starfish. The metamorphosis requires a lot of energy (think about how much teenage boys eat while they go through their growth spurts), so the larvae must be able to swim around in search of food, and slow down to chow down when they encounter an algae buffet. Algae, or phytoplankton, are small planktonic plants and they, too, drift along with currents. If a starfish larvae is lucky enough to come across a dense pack of algae, it makes sense to spend a bit of time there, but when their food runs out it’s time to speed off in search of more.

Researchers at Hopkins Marine Station, a lab in Monterey Bay operated by Stanford University, were interested to find out how the larvae of bat stars moved through their environment and tackled the problem of finding food. They selected a few larvae and observed them under a microscope in water sprinkled with thousands of tiny beads. The beads would follow any small currents generated by the larvae’s motions and time-lapse photographs would reveal tracks of those currents.

The currents were more beautiful and complex than anyone expected: the larvae were forming a band of swirling whorls, or vortices, around their bodies. When the researchers first saw the vortices, they were a bit puzzled. Creating such flow fields requires a lot of energy and, with three important tasks of moving, eating, and growing to take care of, starfish larvae don’t have a lot of energy to spare.

A closer look at the larvae revealed that the creation of vortices was really an elegant solution to the problem of balancing feeding and swimming. All along the edge of a starfish larva (and along millions of other types of marine larvae) are bands of cilia. Cilia are long thin threads that can beat back and forth in the water. A starfish larva is covered by about 100,000 of them that act as 100,000 tiny oars. Imagine paddling across a lake in a two-person kayak. If your paddles are moving in unison, you cruise across the lake, but of one of you moves your paddle backwards, you stall and you may notice the water becomes choppy and turbulent. In the same way, when all the cilia along a starfish larva are beating in one direction, the larva makes fast forward progress through the water. But when patches of cilia beat in opposing directions, a vortex forms and the larva slows down. The more patches of opposing cilia rowers, the more vortices. Algae, floating along in the water near by, are pulled into these swirling whorls around the starfish larva and get trapped.

This experiment led to the spectacular discovery that starfish larvae are equipped with one tool that they can use in different ways to maximize both of their survival requirements: eat when there’s food and move quickly to find more. They use their patches of beating cilia to alternate between swimming and slowing down to eat. Here’s a three-minute video the researchers put together explaining the experiment and results. In it, you can see times when all the patches of cilia are beating in the same direction and water flows smoothly around the larva, followed by times when cilia patches are moving in different directions and whorls are formed.

These beautiful patterns are probably not specific to starfish larvae. Millions of marine species have larval forms that face the same challenges as starfish and many of them are lined with cilia. The Hopkins researchers are eager to put new types of larvae beneath their microscopes. The ocean may be filled with tiny creatures turning on and off the whorls around them to have a meal and speed away. 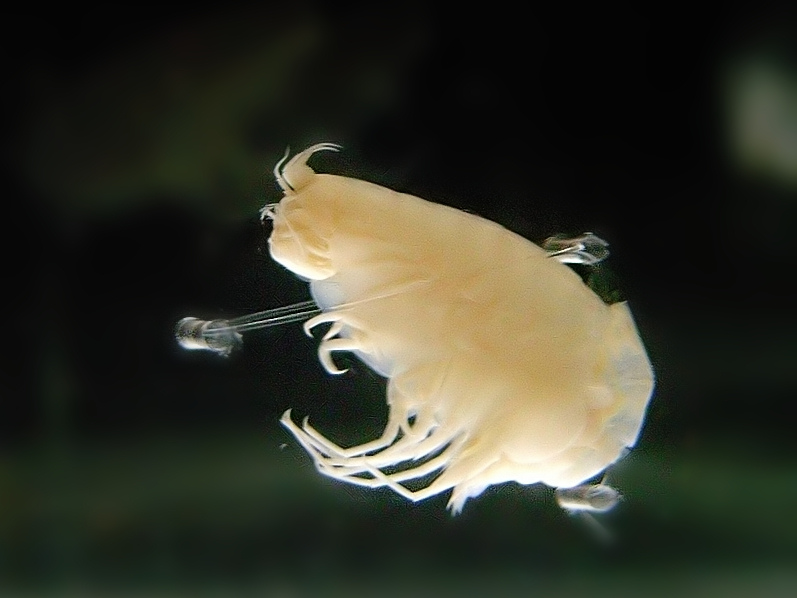