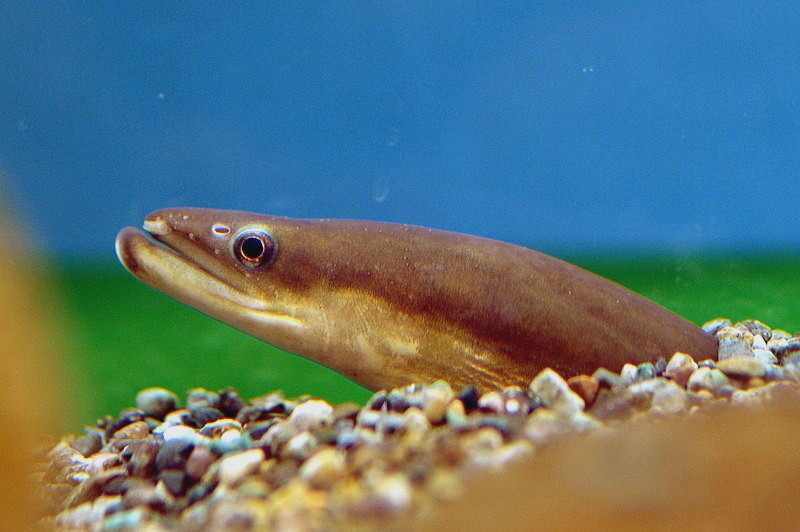 Whether you first heard of it on the T.V. show Friends, or actually had the good fortune of dining on the sweet-savory dish unagi, many around the world are familiar with Anguilla japonica, commonly known as the Japanese eel (Figure 1). But populations of Anguilla japonica have been declining in recent decades (Figure 2), to the point that the International Union for Conservation Efforts (IUCN) has included it on its Red List of Endangered Species. Overfishing is recognized as the chief cause of the decline in Japanese eel populations, but there remains another largely unexplored factor that could have a significant impact: ocean circulation.

The movements of the sea are central to the Anguilla japonica life cycle. These eels cover a remarkable geographical distance during their lifetimes; to spawn, they travel thousands of miles offshore to an area near Guam. Powerful ocean currents then transport the newly hatched eel larvae northward. Think of the current-riding turtles from Finding Nemo, but replace them with tiny flat translucent eel larvae (Figure 3). In this way the eels reach the fresher waters where they mature. But because the young creatures rely on ocean currents, a change in water movement patterns has the potential to interfere with this important step in their life cycles.

Off the coast of Japan, it is the North Equatorial Current (NEC) that carries the eel larvae into the Kuroshio Current to continue their journey to join the rest of the mature eel population (Figure 4). But as the Japanese eel population, hugely important in agricultural and fishing industries, has declined in recent decades, some have suspected that a disruption to this transport process might play a role. To investigate, Chang and his colleagues turned to ocean model simulations involving virtual eel larvae, referred to as v-larvae.

The researchers used a particle-tracking method in an ocean physics model to represent the eel larvae being whisked across the ocean basin. They used ocean physics data between 1993 and 2013 to simulate how virtual larvae (or v-larvae) would be transported from their spawning site by the currents. Two abilities were bestowed upon the thousands of virtual larvae: first, a day-to-night vertical migration swimming behavior, in which they swim down from the surface water during the day to avoid predators. They were also granted the ability to swim horizontally, as one might expect these juvenile eels to do. The researcher tracked these v-larvae for eight months, and measured how many unique larvae visited eight different swaths of the ocean (Figure 5), referred to as visitation frequency. They ran the model using data on ocean circulation spanning 20 years with the hopes of finding out how changing ocean physics over this time frame might have impacted the eel larvae distribution.

After setting loose the v-larvae and counting their visitation frequency to each region, the researchers compiled a collection of graphs displaying visitation frequency over the years (Figure 6). They found that more of the v-larvae were being pushed south where the NEC splits into the north-flowing Kuroshio and south-flowing Minandao, affirming the notion that changing circulation patterns were hindering the eel larvae from reaching the region where they could mature.

Honing in on the ocean physics, the next question Chang and his colleagues explored was exactly what changes were occurring in the local circulation that could be responsible for this shift in where the v-larvae were ending up. Studies have shown that the westward flow of the NEC has been weakening over the past two decades, while a below-the-surface southward flow of water around 14˚ N latitude was strengthening. The weaker NEC would lengthen the travel time of the v-larvae, perhaps increasingly subjecting them to the southward pull of the subsurface current, preventing the larvae from making their connection to the Kuroshio.

The researchers speculated that the weakening of the NEC is likely caused by changing wind patterns. Powerful large-scale winds blowing across the ocean pulls water around at the surface, enforcing the structure of the currents. But long-term changes in wind strengths might disrupt the usual pattern of circulation, accounting for the weakening of the NEC’s northward flow to the Kuroshio. By similar mechanisms, a reduction in the strength of the Kuroshio might also be to blame for the reduction in v-larvae reaching their northern destinations.

The reason why the winds are changing – and further, the ocean circulation pattern is changing – is still unclear. While some have attributed it to human-caused climate change, the forcings remain complex and ambiguous. Chang and his colleague recognize that the 20-year period they examined for this study is not long enough to draw conclusions about long-term climate changes. In addition, the contributions of a number of other unexplored factors to the decline in Japanese eel populations, including changes in food source for the larvae, changes in fishing efforts, and changes in regional salinity levels (which eels are acutely attuned to) due to shifts in rainfall patterns, require more research to untangle.

This study reinforces the idea that recent changes in ocean circulation may partially explain the recent drop in Japanese eel populations. While the Japanese eel populations were the first to show declines, they are not alone in their disappearance; world eel species have shown alarming declines in recent decades. Conservation efforts for Anguilla japonica and eel species around the planet requires an understanding of how changes in the ocean-atmosphere system forcing changes in ocean circulation impacts the fate of these creatures.