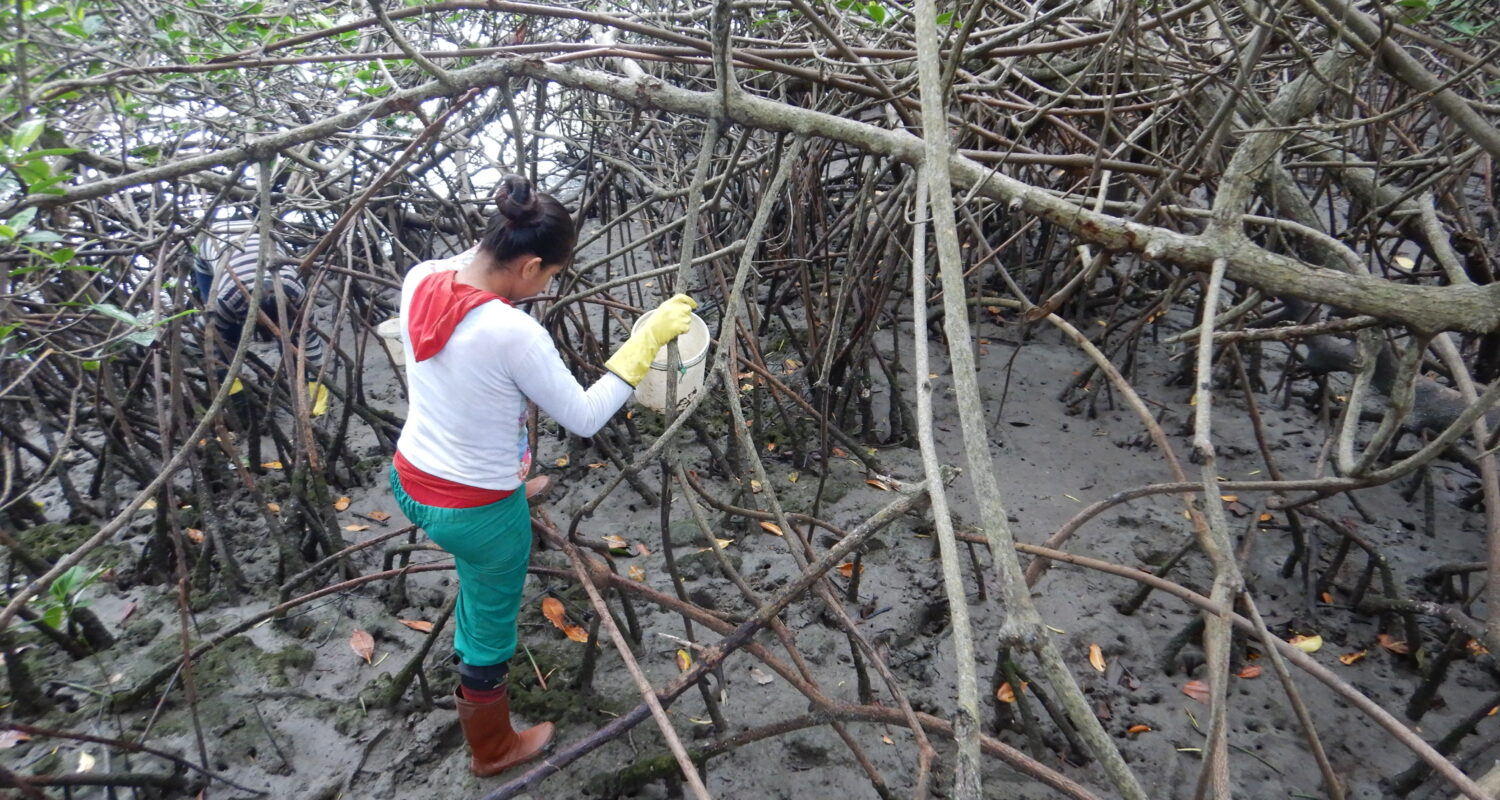 Shrimp aquaculture is affecting coastal ecosystems worldwide, but what is less known is how this industry is changing the lives of those living at this interface. Mangrove forests represent one of the primary ecosystems impacted by shrimp farming and it is estimated that 38% of  mangrove forests globally were destroyed due to this industry. In South America, Ecuador is experiencing these industrial and ecosystem changes, and is now one of the largest shrimp exporters, making it an ideal location to study the effects of shrimp aquaculture on mangrove loss. Importantly, shrimp farming has not only destroyed mangrove forests but the livelihoods of many Ecuadorians living in this region, known as marine-dependent communities (MDCs).

In Ecuador, women extract shellfish from mangrove forests, where it has been traditionally gathered for household consumption and locally traded for over 150 years. Typical shellfish from these mangroves are called cockles and La concha is the practice of gathering cockles. The women who gather mangrove cockles as a source of livelihood are known as concheras, which literally translates to “the cockler”. Gathering mangrove cockles as a source of livelihood continues to be the primary source of income for many women in MDCs. These mangrove forests provide MDCs, especially women, sustenance, opportunities, for income, and the ability to pass on cultural traditions. However, when the shrimp aquaculture industry began to take hold in the region of Esmeraldas, Ecuador in 1982, it began to change the physical and societal landscape of this region.

Social scientists from Colombia and the United States aimed to figure out this complicated social and ecological ecosystem and understand how MDCs adapt to mangrove landscape transformations driven by large-scale shrimp aquaculture. They also aimed to identify the gendered impacts of these landscape changes by understanding how gender, gender norms, and gender relations inform the adaptation strategies of MDCs.

To conduct their study, the scientists used a variety of methods including ethnography (i.e., the systematic study of individual cultures) and interviews of the mangrove users. They also utilized Geographic Positioning System (GPS) to track movement by the mangrove users as they gathered shellfish from the mangroves. To conduct the ethnographic study, the scientists resided within the MDC, known as the Esmeraldas province, with a local family, which enabled them to take on the role of “observer as a participant”. The interviews were then transcribed with “in-vivo” codes to identify recurring patterns in the language while the GPS data were categorized into the different user groups entering the mangrove based on gender and age.

Utilizing ethnographic and GPS data, the scientists found that women, concheras, are disproportionately affected by the loss of mangrove forests due to shrimp farming. The establishment of large-scale aquaculture led to the collapse of traditional local livelihood practices, which pushed men into mangroves to gather cockles, a practice most held by women before this industry shift. The change in livelihood for men, in effect, displaced women from the mangrove forests, causing them to lose their autonomy, economic independence, and ability to pass on cultural tradition. In addition, the introduction of shrimp aquaculture increased local reliance on mangrove resources, leading to the depletion of mangrove cockle populations, and putting both men and women in vulnerable positions.

Based on these conclusions, the scientists urge that sustainable shrimp aquaculture development requires more than efficient harvesting practices. It needs to be environmentally sound as well as socially just. This research shows the complex societal and gendered structures within a region of depleted resources, and the importance of considering these structures when growing an industry, both in Ecuador and beyond. In addition, the study shows how local communities can reveal problems otherwise overlooked and provides insight into complex environmental problems. Engaging in local knowledge and understanding the social fabric of a community are important to consider for industry as well as science as we attempt to foster a more inclusive place within business and research.