You’ve seen it; plastic bottles discarded on the beach, photos of marine life starved on a diet of plastic straws, shopping bags adrift in a flotilla of single-use refuse.

Plastic changed the world when it was invented 1907. Even the very first synthetic polymers were revolutionary compared to glass, metal, and other pre-industrial revolution materials. Tough but lightweight, transparent, waterproof, and disposable, plastic quickly replaced many older medical instruments, packaging, and some building materials. Improvements in industrial-scale manufacturing processes in the 1950s and 60s rocketed plastic into cheap mass production and sent it around the world for use in all kinds of packaging, clothing, furniture, electronics, and toys. We now produce about 322,000,000 tons of plastic, globally, every year (~125X the weight of all the blue whales on earth). About half of this ends up directly in the landfill after a single use.

Plastic has a nasty habit of ending up in water, thanks to both intentional discarding of larger items and the light weight of tiny plastic particles breaking down on land. In the hydrological cycle, all roads lead to the ocean. So even properly processed landfilled plastics can find their way to your favourite beach if there’s been enough rain.

If the images of suffocated turtles flooding social media lately don’t do it for you, you might want to pay attention to some recent findings by scientists focusing on the toxicology of plastics in humans.  Plastic particles are known to absorb harmful chemicals like PCBs, metals, PAHs, and other reproductive toxicants and carcinogens. In some cases, these have been shown to desorb in the gut.

Humans are not completely removed from the marine food web, though we sometimes like to think of ourselves as separate from the natural world. We eat ocean-derived foods, we participate in the global water cycle, and as we now know, plastics are everywhere. Shellfish, finfish, tapwater, beer, and table salt have all been shown to contain varying amounts of plastic particles, mainly in the form of microfibers.

A collaborative study by Kosuth et. al. recently set out to determine  whether these confirmed findings of plastic in human consumables were isolated cases, indicating only regional pollution problems, or representative of a larger trend. They focused on tap water and sea salt, collected from global sources, and beer, brewed with water from the Great Lakes.

Kosuth found plastics in 81% of tap water samples they tested, the vast majority of which were fibres. Water samples averaged ~6particles/L, the highest of which was found in the US with ~9particles/L. Tap water from developing nations had fewer plastic particles, on average, than water in developed nations, and three brands of bottled water tested also showed less plastic (though plastic was still present in each).

All beer brands were positive for plastic, averaging ~4 particles/L. Like the water, most particles were fibres. Interestingly, there seemed to be no correlation between the plastics found in the water used to brew the beer and in water samples from the same municipality as the brewery, indicating that the plastic contamination may not be just from the water used to brew the beer itself. This could indicate that varying processing practices affect ultimate plastic content, some resulting in less plastic than the water they started with.

All brands of salt were found to contain plastics, averaging 212 particles/kg and, as with the water and beer, most of them were fibres. Unlike the tap water and beer, it’s difficult to tell where any one sample of salt has come from. Salt is often mixed in multi-source batches before being sold around the world, so the authors can’t say which salts might contain the most plastic. However, some brands contained upwards of 800 particles/kg, an amount the authors say is similar to other studies on US- and China-sourced salts.

Kosuth’s study reveals a concerning level of plastic contamination in items intended for human consumption. The ubiquity of plastic contamination across tap water sources is especially worrisome, as water cannot be avoided in the way that beer and sea salt can. Drinking the recommended 2-3L of water a day, under these findings, would result in the average person consuming up to 18 plastic particles. In a year, you would consume thousands of particles, mostly plastic fibres.

We have reached a point of no return with plastic pollution. More research is needed to determine the effects of this elevated plastic consumption in humans, especially over the long-term and in areas where particles are likely to pick up chemical contaminants. In the meantime, it’s time to start switching to reusable containers, natural fibre clothing, and adopting a lifestyle that reduces our plastic output.

If you’re interested in making the switch to plastic-free living, or maybe just thinking about cutting back, there are some great resources on the Queen of Green blog hosted by the David Suzuki Foundation. Check it out here! 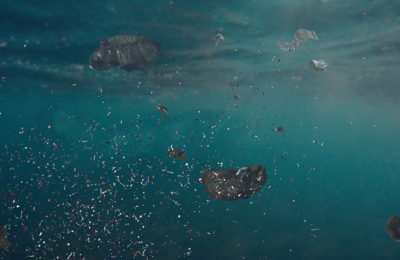