Due to the absence of long-term observations of ocean circulation and heat transport, there have been limited direct studies to support the hypothesis that ocean circulation helps to drive long-term variability in the ocean (i.e. Atlantic Multidecadal Oscillation). A new study led by Gerard McCarthy of the University of Southampton uses sea-level observations from tide gauges along the east coast of the US to examine ocean circulation anomalies, and compares the fluctuations in sea level with large-scale temperature variations in the Atlantic Ocean.

This study examines the gradient in sea level along the US east coast to diagnose Atlantic Ocean circulation. Sea level variability between Florida and Boston can be divided into two separate regions. From Cape Hatteras to Boston (north), sea level is most similar to the overturning circulation in the North Atlantic (e.g. AMOC). From Florida to Cape Hatteras (south), Gulf Stream variability is more strongly associated with sea level fluctuations. Cape Hatteras serves as a theoretical boundary between subtropical (southern) and subpolar (northern) ocean gyres in the North Atlantic (Figure 2). An ocean gyre is a system of currents created by wind patterns and Earth’s rotational force.

McCarthy and co-authors developed a circulation index by differencing subtracting the average subtropical sea level from subpolar gyre sea-level using data from tidal gauges. When this index is positive, ocean circulation, and therefore heat transport, has a stronger northward flow and northerly extent. Since long-term temperature variability is most pronounced in the subpolar region, the circulation index can be used to examine fluctuations in both heat content changes (inferred from sea level) and the Atlantic Multidecadal Oscillation since 1960.

The observed sea-level variability and circulation index supports the hypothesis that ocean circulation changes and heat transports in the North Atlantic influence fluctuations in the Atlantic Multidecadal Oscillation.

Overturning circulation in the Atlantic is slowing down and is reinforcing cooler sea surface temperatures in the North Atlantic. While this may offer temporary relief to rising ocean temperatures, the coupling between these processes raises sea-level heights along the northeast coast of the US, putting major coastal cities like Boston and New York at elevated coastal flooding risks. 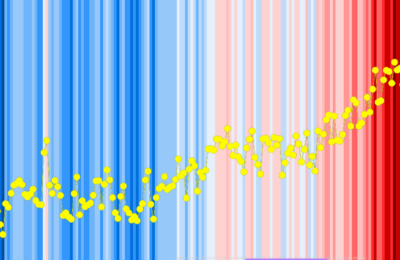