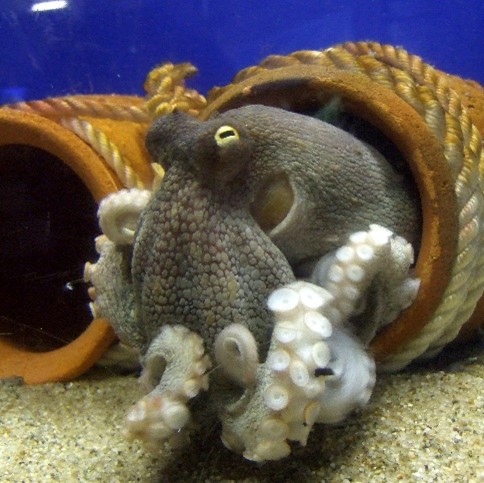 Our bodies rely on sleep to maintain a healthy brain, body, and immune system. We are not alone: Other mammals and vertebrates (including birds and reptiles) share similar sleep cycles to our own – cycling through periods of light (non-REM cycles) and deep sleep (REM cycle). Some animals have even been recorded dreaming during REM sleep cycles – looking at you, dog chasing those squirrels through dreamland.

There is a good chance that even invertebrates (animals without a backbone) sleep in some sense, but science has struggled to define sleep in animals with such different brain architecture. On top of that, scientists cannot easily monitor sleep cycles with the same methods we use to visualize brain activity in vertebrates (like the EEG – or electroencephalogram) in these animals that are often soft and squishy or protected by a hard body coating. Instead of measuring brain activity, researchers must carefully watch for behavioral changes in animals that might indicate they are sleeping.

Octopuses and other cephalopods (squid, cuttlefish and nautilus) are known for their remarkable intelligence relative to other invertebrates. Given the distant evolutionary relationship between cephalopods and vertebrates, scientists frequently study the similarities and differences in behaviors, sensory systems, and brain function to understand how traits evolved in different lineages of animals.

While observing octopuses in aquariums, scientists noticed behavioral changes that could indicate a resting state similar to sleep stages in vertebrates. The octopuses could frequently be found resting motionlessly on the bottom of their tank with their head lowered and arms curled around their body. During these bouts of stillness, the octopuses would also breathe more slowly, turn a very pale color, and their pupils would shrink in size (remember, octopuses don’t have eyelids to close).  While scientists suspected these behaviors were indicative of a resting state, they could not tell if octopuses were sleeping, or if they were simply in a state of stillness while awake.

How to classify sleeping versus stillness

To test if octopuses were truly sleeping, researchers monitored four individual octopuses over the course of several days. The team noticed that the octopus behavior could be broken down into three categories: Active, Alert, and Quiet. During the Quiet state, the octopuses would remain still, but the researchers noticed subtle differences in behavior (including eye dilation, sporadic body movement, and changes in body coloration and/or texture) that could signal various stages of alertness.

Behavioral changes alone could not determine if octopuses were sleeping. The researchers also had to find a way to test brain activity. In leu of hooking the octopuses up to electrodes to monitor brain waves (as is done in vertebrates), the scientist decided to test if the octopuses were alert by seeing if and how octopuses responded to sensory stimuli during their active and quiet states.  Researchers examined how octopuses responded to visual cues – by showing them videos of moving crabs – and to tactile stimulation – by tapping the aquarium with a rubber mallet at different intensities. When in an alert state, the octopuses would rapidly and readily respond to both the visual and tactile stimulation. But it took longer for octopuses to respond to visual cues and required stronger tactile stimuli to illicit responses from octopuses when octopuses were in a quiet sleep or active sleep states.

Octopuses in an active sleep state were often unresponsive to both the visual and tactile stimuli. Based on the change in alertness between the active and sleeping states, the scientists conclude that octopuses experience sleep states similar to those in vertebrates. Scientists do not yet know what is happening in the octopus brain during these sleeping states or why sleep evolved in this group of invertebrates.

The deep evolutionary lineage of sleep

This study is the first to report an “active sleep” in an octopus and the researchers think this state could be similar to the REM (rapid-eye movement) sleep mammals experience when in a deep sleep state (when dreaming occurs). Like mammals, the octopuses even appear to cyclically alternate between states of light and deep sleep. The scientists note that similar behaviors in cuttlefish could indicate sleep states in other cephalopods.

The similarities between cephalopod and vertebrate sleep cycles highlights how important sleep must be for animals. Cephalopods are evolutionarily very distantly related to vertebrates and have evolved a drastically different brain system. The fact that both groups of animals have converged upon a similar sleep mechanism suggests that sleep must serve important biological functions in both groups. Future studies will hopefully shed light on the role of sleep in cephalopods and invertebrates to see just how universally important sleep is to different animals.