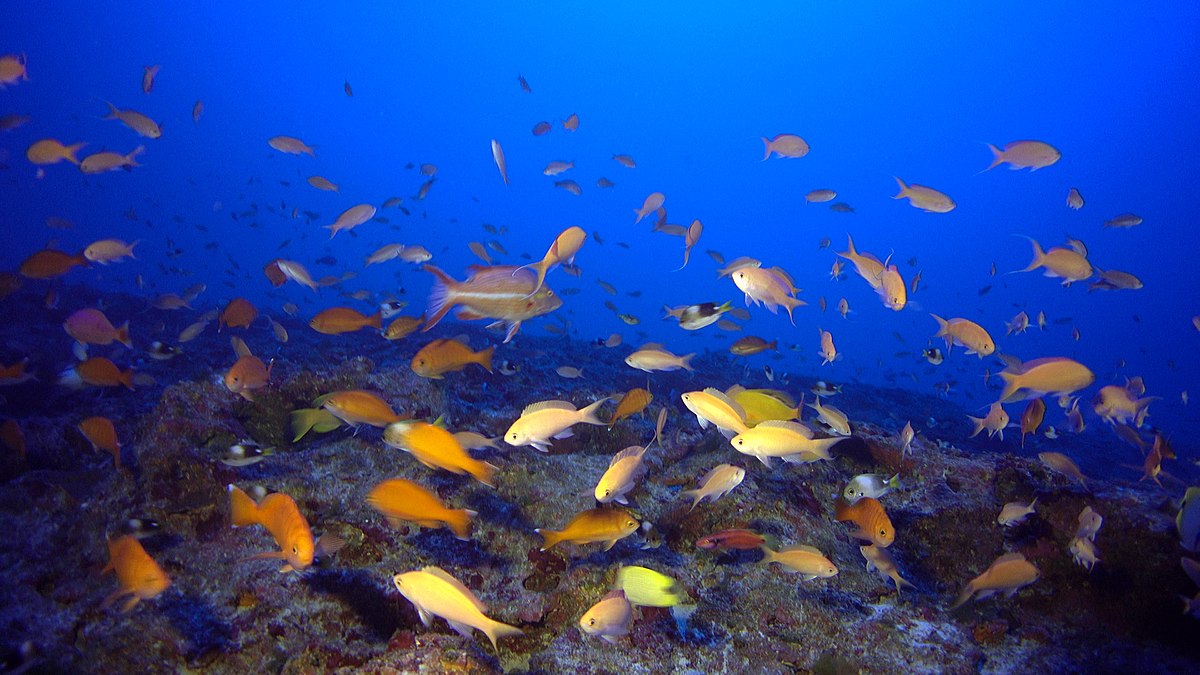 You may be familiar with coral reefs from snorkeling and scuba diving trips, visits to the aquarium, or from their portrayal on TV and movies. The brightly colored ecosystems are home to an incredible array of ocean life and are some of the most biodiverse and productive ecosystems in the world. It is easy to see how these beautiful ocean hotspots of life captivate people and draw the attention of scientists and tourists alike. But did you know that there are coral reefs just beyond our reach? In between the brightly lit shallow waters we know so well and the inky black depths of deep-sea lay the mesophotic reef ecosystems.

Never heard of a mesophotic reef? You aren’t alone. Sitting about 200 – 500 feet below the surface of the water, these reefs cannot be explored with normal SCUBA diving techniques and have, therefore, been studied very little. Only the smallest amounts of light permeate water to these depths, giving the waters here the appearance of the sky at twilight, just after the sun has set. Yet, these ecosystems are still teaming with life that can take advantage of even the meager amount of light they do have. Gorgeous fishes painted with bright hues of red, yellow and orange are abundant in these depths. Even corals, which rely on sunlight to make their food, can be found in mesophotic reefs. While some species living in deep reefs can also be found in shallow water, many other species are unique to mesophotic reefs and scientists are still finding new species living here!  (Learn more about mesophotic reefs from this video: https://youtu.be/JkIZ6HICXEQ)

Unfortunately, due to their great depths, mesophotic reefs are difficult to study. Scientists must use very special SCUBA equipment to spend even short amounts of time at these extreme depths. Outfitted with re-breathers and tanks of mixed-gas blends containing oxygen and helium, a group of scientists surveyed mesophotic reefs in the Atlantic (in Bermuda and Curacao) and the Pacific (in the Philippines and Pohnpei) to discover more about the unique mesophotic reef ecosystems (Want to learn more about how divers can travel to these depths? Watch this video: https://youtu.be/sg6Ejb9eqmQ)

How Unique are Mesophotic Reefs?

Scuba divers surveyed 28 different mesophotic reef sites to identify fish and coral species living in these deep reefs. The researchers explored reefs up to 440 feet deep – for a little perspective, most recreational scuba divers can only spend a short amount of time at depths of 100 feet.

The researchers found 1,762 different species of fishes and 689 different coral species living on the mesophotic reef sites. To determine if mesophotic reefs are distinct reef  ecosystems or are just harboring the same type of organisms that can be found on shallower reefs, the researchers calculated the percentage of species that overlapped between depth zones in shallow water and at different depths along mesophotic reefs. Even though many species may have a large depth range and extend into mesophotic reefs, the scientists found that the majority of corals and fishes on mesophotic reefs are depth specialists that are only found in a small depth range. Even some of the species that have a wider depth range had distinct populations of shallow-dwelling versus deeper-dwelling individuals, suggesting that the mesophotic reef ecosystems are quite unique and house a community distinct from the shallow water counterparts.

Distinct but Not Detached

Even though the mesophotic reefs proved to be unique and distinct habitats within themselves, they are far from autonomous ecosystems. In the past, researchers have found that many top-level predators (like sharks and larger fishes) can be found at mesophotic reefs but travel to and rely on the abundant food sources in shallower reefs. This is just one example of the connectivity between shallow and deep reefs.

The researchers of this study found another, more alarming, connection between the shallow water habitats and the mesophotic reefs: their susceptibility to damage from human actions and natural disasters. Sadly even 400 feet below the surface of the ocean, the researchers found man-made trash during nearly a quarter of their dives. The deep reefs were even impacted by the hurricanes thought only to damage the fragile shallow-water corals where strong storm surges were experienced. In the days after Hurricane Matthew (September – October 2016), divers were able to survey mesophotic reefs in the Bahamas. Those in the path of the storm were completely buried with sediment and debris that appeared to have fallen from damaged reefs in shallower waters.

The future of mesophotic reefs

Because mesophotic reefs are so remote, it has often been thought that they are beyond the reach of human-induced damages and may be able to provide a much needed refuge to shallow-water corals and fishes being ravaged by fishing, pollution, and warming and acidifying waters. However, the surveys conducted in this study prove that this is clearly not the case. Mesophotic reefs harbor a very unique set of fish and corals. Scientists are still discovering new species living in this extraordinary habitat all the time! Even though we cannot see these animals ourselves, we are still impacting their lives. The fishing and pollution we know damage shallow water reefs spill into the deeper waters as well, putting mesophotic reefs in peril. We are just starting to learn about mesophotic reefs and have so much more to discover about the habitat and organisms living here.  Who knows if the species living here could hold the key to unlock mysteries of deadly diseases or could help us uncover a new type of antibiotic? We certainly will never know if we do not work to protect mesophotic reefs now.