The shelves of ice that surround the Antarctic continent are melting rapidly in some regions, flooding the surrounding coastal seas with freshwater and contributing to sea level rise. These ice shelves act like natural dams, holding back the flow of massive ice sheets behind them. As the ice shelves melt, this dam weakens, allowing the flow of ice sheets toward the ocean to speed up.

Ever since scientists measured the melting of Antarctic ice shelves, they have been looking to the ocean and atmosphere to find the cause of this melting. One of the main drivers is warm water melting the ice shelves from below. Measurements of ocean temperature show that the water is warmest near the ice shelves that are melting the fastest. But scientists are still puzzling about why the water is warmer in some places than others, and how this warm water crosses from the deep ocean away from Antarctica onto the shallow continental shelf seas around the Antarctic coast. Scientists also don’t have enough measurements to see if this warm water has gotten even warmer due to climate change, or if the melting of ice shelves has accelerated in response. Understanding what drives the melting of the ice shelves is key to accurately using climate models to predict the amount of sea level rise coastal communities need to prepare for later this century.

Because of the extreme weather and ice-covered conditions in the Antarctic, ships usually only go down there in the summer. Thus there are very few direct measurements of the ocean surrounding Antarctica, especially in the winter. However, in the past decade, scientists have been coming up with creative ways to observe the ocean without ships, using new technology to collect data remotely and send it back to land via satellite. One of the more creative uses of new technology has been to attach instruments to measure ocean temperature and salinity to marine mammals, which naturally cover long distances and dive very deep.

In Antarctica, Elephant seals and Crabeater seals are used for remote sensing studies because of their large range and their ability to dive beneath sea ice and transmit data in open cracks in areas that are inaccessible to ships. Researchers attach the instruments to the seals like hats, using a special glue that keeps them attached, but does not bother the seal. The seals then migrate south to the Antarctic coast, diving very deep and collecting data as they go. Their data and GPS location are transmitted to a satellite when they come up to the surface to breathe. The sensors work a lot like autonomous floats, but with their own power source. As well as collecting valuable information about ocean properties, biologists are learning a lot about the seals themselves by tracking where the seals swim and how deep they dive.

Marine mammals with instruments attached have collected over 300,000 vertical profiles of temperature and salinity. In the Bellinghausen Sea, one area in West Antarctica that is showing the fastest rates of ice shelf melt, there are 19,893 profiles from 2007-2014. A group of researchers from Southern California, Sweden, and Germany delved into this data to look at how warm water is getting up to the ice shelves in the Bellinghausen Sea.

Insights from below the ice

The researchers looked closely at water temperature in the Belgica Trough, which cuts into the steep continental shelf, allowing deeper water from offshore to flow up into the shallow sea. The seal data showed warm water below the surface with temperatures above 1 °C (this is relatively warm in this part of the world) all the way up the trough except for right at the face of the ice shelf. This showed that warm waters from offshore are able to access the ice shelves by flowing up through the trough.

Once the scientists identified the inflow of warm water that could drive melting at the base of the ice shelves, they looked at all of the profile data for signs of meltwater: the very cold, fresh water that melts off the bottom of the ice shelves. They found the signature of meltwater right at the edge of the ice shelves and flowing out in narrow currents along the western edge of troughs. This suggests that the troughs are hotspots of exchange, with warm water from offshore flowing in the eastern side in a narrow current, and cold meltwater flowing back out the western side.

Antarctica’s not so icy future

Comparing their results over different time periods, the researchers saw that there was a thicker layer of meltwater in 2013-2014 than 2009, suggesting that the amount of ice melt can vary a lot year to year. To figure out if the ice shelves are melting more quickly over time due to warmer oceans or other climate changes, sustained observations are needed over many years. There are still many processes that are not well understood in the interaction between ice shelves and the surrounding ocean and atmosphere, but using seals to observe the ocean is not only teaching us about the seals habits and behavior but also rapidly increasing our understanding of Antarctica and improving our ability to predict future melt of Antarctic ice shelves. 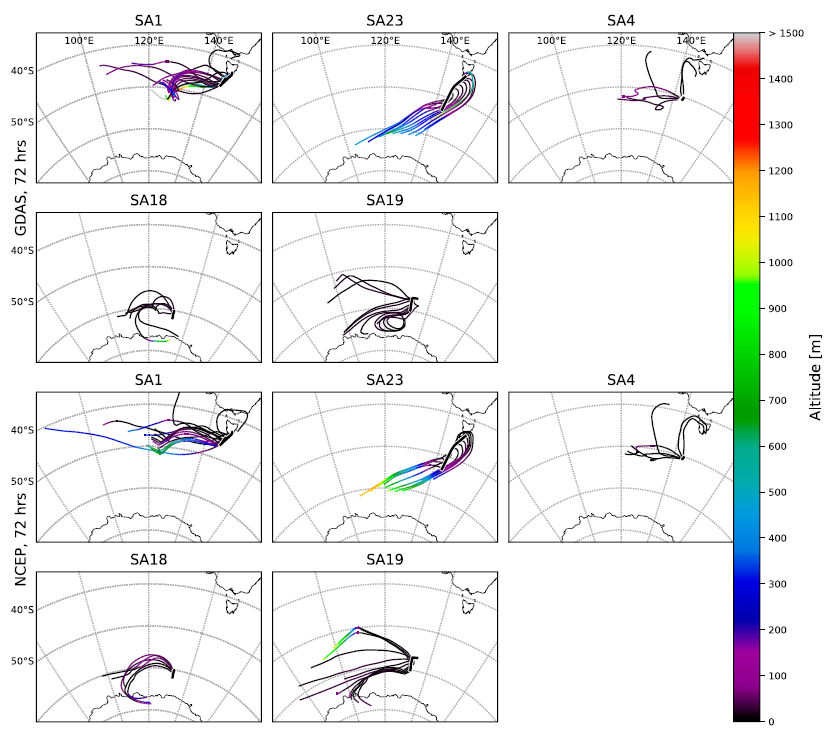