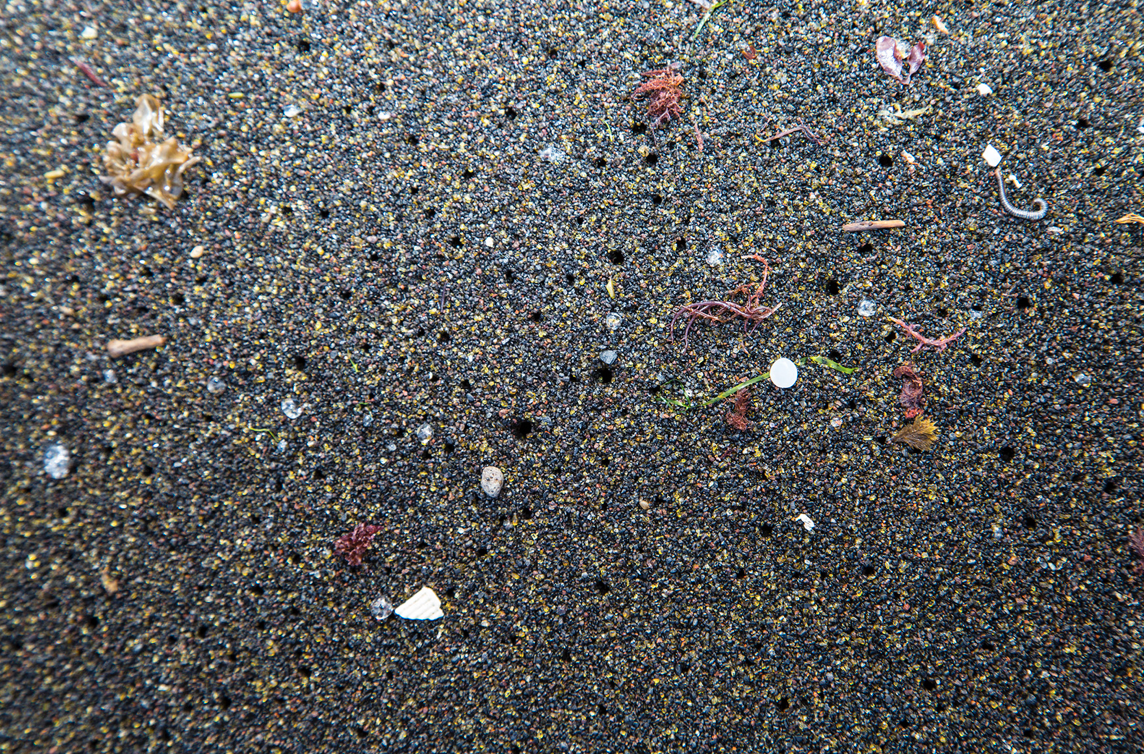 Remember that plastic fork you threw away after lunch, the plastic wrap on the cucumber you bought from the grocery store, or the straw that was inadvertently placed in your glass without even asking? While these items may be a one time use for us, they persist in the environment for extremely long periods of time. Instead of going away, the plastic materials break down into smaller and smaller pieces. While it’s easy to see how turtles or fish become trapped in large plastic bags, it’s harder to see the impacts of tiny plastic fragments, which are often referred to as microplastics (Figure 1). Though small, they can have an enormous impact when ingested by marine animals. Plastic contains harmful chemicals that impact the animal’s ability to feed and reproduce. This further impacts us, as plastics ingested by animals lower on the food chain eventually work their way up the chain into our very own food sources.

Much of this plastic ends up in the ocean, but it can be challenging to determine how much plastic is actually there and to know where exactly the plastic is located. Estimates suggest between 90,000 and 250,000 metric tons (about 550 million pounds!) of plastic are floating in the sea (Cozar et al., 2014; van Sebille et al., 2015), but that corresponds to only 1% of the estimate for plastic waste inputs in 2010 (Jambeck et al., 2015).  This means that we are polluting more plastic than we estimate with current models. Brach and co-authors aim to improve how we monitor and assess the amount plastic present in the ocean.

Where does the plastic go?

Identifying where the plastic debris collects is an active area of research. Most plastics end up accumulating in ocean gyres, such as the Great Pacific Garbage Patch. Ocean gyres are extremely large and flow patterns are caused by wind and Earth’s rotation in each of the major oceans. While gyres are key to ocean circulation, smaller scale water transport   mechanisms may also play a very important role. This study zooms in to smaller scale water circulation to determine how eddies influence the location of plastic debris.

Eddies occur throughout much of the ocean. They are typically under 100 km, that is about 900 times as long as a football field (small relative to the gyres!). There are two types of eddies, cold and warm core, named for the temperature of water at their center. Cold core eddies swirl in a counterclockwise motion in the northern hemisphere and the center of the ring tends to have colder water. Warm core eddies are the opposite; they swirl clockwise, are warmer in the middle. The ocean sea surface is not flat, and some of the variation in sea surface height is caused by eddies. The warm core eddies domed surface will have a higher surface height in the middle, whereas cold core rings dip down in the center.

One method to determine the location and type of eddies is using satellite altimetry. The satellite sends a signal down to earth and this signal bounces back to the satellite. Using the location and time it took for the signal to return, we can determine the sea surface height. Figure 2 shows a general example of how the ocean surface height varies  in space from data collected using satellite altimetry.

In this study, the variation in height ranged from 3 to 40 cm different from the average surface height (fascinating that we can detect such small changes all the way from space!). Satellites are useful when studying the global ocean because they repeatedly take images of Earth’s surface covering a much larger area than one might cover during time on a ship. Since plastics are too small to detect from space, this study combines eddy locations from satellite imagery with plastic quantities from ship surveys to see whether eddies are influential in the distribution of marine plastic.

To test how eddies affect the distribution of plastic in the ocean, researchers collected water samples from areas of the ocean that coincided with the location of eddies. They chose the ship sampling track by conferring with satellite data daily to ensure that they travelled through eddies. They were able to pass through both a warm core and a cold core ring.

Since they were not able to use the satellite imagery to measure plastic concentrations, they combined the information of where eddies occurred with measurements of the plastic quantities collected while on the ship. The water samples were collected by dragging nets off of the boat along the surface of the water. The nets were made of a very small mesh to collect debris that has broken down into tiny pieces of plastics which they then counted and weighed. Figure 3 shows an example of a net tow that can be used to collect plastic debris from the surface ocean. They used a computer software imaging tool to measure the length and width of the debris.

In general the plastic concentrations observed in this study are consistent with typical observations in the North Atlantic subtropical gyre and in some locations they found over 300,000 pieces of plastic per square kilometer. To put this in perspective, 250,000 pieces per square kilometer of plastic would be like having about 1,000 pieces of plastic on each acre of land you own. However, these sampling sites aren’t our backyard – they are extremely far away from the actual plastic garbage source.

Overall, this study combined observations of eddies from space with plastic abundance data collected from a ship. Researchers observed more plastic in the warm core eddy than the cold core eddy. This suggests that eddies play an important role in the location of plastics at the sea surface. However, this study only sampled two eddies. Despite limitations, this opens up opportunities for future research to look at the role of eddies in plastic distribution and transport in greater detail. This offers the opportunity for scientists to analyze past trawl datasets and corresponding satellite imagery to see if similar conclusions can be drawn from other sample sites and times of plastic data collection. Establishing linkages between satellite data and measurements of plastic from water samples is important because one day we may be able to obtain global satellite coverage estimates of plastic concentrations. Estimating plastic concentrations from space would allow us to more readily detect how plastic concentrations fluctuate with time and could even inform future cleanup projects. Considering the negative impacts of plastic on marine ecosystems, being able to predict where plastics will accumulate is critical for ocean health.