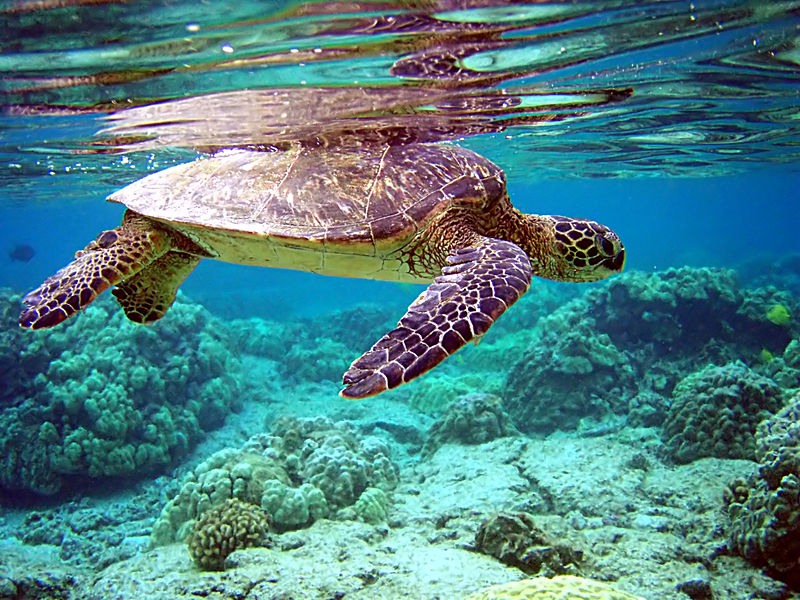 We know sea turtles to be marvelous marine reptiles, swimming hundreds of miles on their migrations across the world. Scientific research has helped us uncover much about sea turtles: including how they use Earth’s magnetic field to return to the same spot they hatched and even how the temperature of the sand surrounding their eggs determines sex.

Yet the answer to one large question still eludes us: how old can sea turtles get? Currently, we only have the answer for one out of seven species of sea turtle. Green sea turtles are estimated to live up to 75 years of age.

If not for the pure wonder at the thought of these prehistoric relics living massively long lives, answering this question has huge implications on sea turtle conservation – especially as climate change introduces new threats and amplifies existing threats to all seven species.

But sea turtles are incredibly hard to observe. Their extensive migrations and high death rates of juveniles makes it near impossible to track one turtle over its entire life.

So to predict the answer, we turn to genetics.

Benjamin Mayne and a team of scientists analyze a string of nucleotides, the basic building blocks of DNA and RNA, called CpG (cytosine-phosphate-guanine). According to Mayne and his team, how frequently gene promoters (sequences of DNA that proteins bind to) contain CpG areas can predict the lifespan of vertebrate animals.

To get to that string of nucleotides, Mayne et al. (2020) took tissue samples from six different species of sea turtles: Leatherback, Loggerhead, Olive Ridley, Hawksbill, Flatback, and Green sea turtles. Then, the scientists identified gene promoters that could predict lifespan by comparing just under 29,600 different arrangements of nucleotides, and CpG area frequencies, to a database consisting of all types of animals we know the lifespans of. Finally, Mayne et al. (2020) tried to deduce if sea turtle size correlated with predicted lifespans: mainly the length of their shell and their weight.

A lifespan’s worth of predictions.

Size and weight also had a relationship with lifespan length: the longer and heavier a sea turtle species was, the longer its lifespan was. It makes sense, then, that the Leatherback sea turtle is not only the largest species of sea turtle currently alive, but also has the longest predicted lifespan.

Predicting sea turtle lifespan provides us with a number we never had before when it comes to understanding these ancient creatures. However, these numbers represent a generalization of the entire species. Mayne and his team say that a lifespan prediction can’t account for environmental factors and population differences. This means that Mayne et al.’s (2020) predictions don’t encompass things like how bycatch rates for one group of Leatherback sea turtles affect lifespan compared to another group living in a completely different location. Therefore using genetics to predict lifespans can only predict potential maximum ages for an entire species, not a specific group or even an individual.

Takeaways to protect our turtles.

When we want to conserve and protect a species of animals, we need to predict things like the risk of their extinction, how long populations take to grow and rebound, and even how long it takes for animals to reach an age where they can begin reproducing. Scientists have noticed that some sharks, for example, have a hard time rebounding from threats like fishing methods with high bycatch risk because of their slow growth rate, long lifespans, and late maturation.

Without having lifespan predictions, it can be incredibly difficult to make those estimations for an animal that we know is vulnerable, like sea turtles. In fact, nearly all seven species of sea turtles are either threatened, endangered, or critically endangered. Threats like poaching, getting caught in fishing gear, and even climate change are significantly hurting their populations.

What Mayne et al. (2020) provide is a prediction of the maximum lifespan of five species of sea turtles. Their research also provides a method of predicting other species’ lifespans that does not require catch-and-release or the lifelong tracking of one individual specimen. With these predictions, we can begin working towards making those broader estimations, like extinction risk and population growth, that will help us develop strong conservation strategies to protect the marine reptiles we love so much.