This post is part of a semester-long collaboration with Dr. Michèle LaVigne, a professor at Bowdoin College, who partnered with oceanbites authors to incorporate science communication into her Oceanography classes. This is a guest post co-authored by three of her Oceanography students, Anneka Williams, Ana Gunther, and Ted Fuell.

If you’ve ever been outside on a hot day, sweltering in the heat, you’ve probably had a moment where you longed to find an air-conditioned space. The Earth also has cooling mechanisms to prevent itself from overheating. Earth’s ocean helps lower global temperatures by removing carbon dioxide (CO2) from the atmosphere, which decreases the amount of heat it can trap. This ocean cooling effect is well-known for regulating global temperatures, but it wasn’t until recently that a team of Norwegian scientists uncovered the mystery of just how important the Arctic Ocean carbon storage effect is.

The atmosphere acts like a blanket, and when we burn fossil fuels to power places like our homes, offices, and modes of transportation, we add CO2 to this blanket. The more CO2 we add, the more heat that gets trapped underneath, which increases global temperatures. Since the industrial revolution, the amount of CO2 in the atmosphere has been increasing as a result of anthropogenic emissions, causing a subsequent rise in  global temperatures.

The Arctic has felt this temperature increase the most, warming twice as fast as the rest of the Earth over the past thirty years. As a result, there has been a rapid melting of Arctic sea ice in the last few decades, with some places losing as much as 10 percent of the original amount.

Melting sea ice is a clear threat to the Arctic, as it will cause many species to lose their habitat and seriously disrupt a number of environmental and ecological services that occur in the region.

Surprisingly, many researchers have found that the loss of sea ice can actually increase the cooling effect of the ocean. How? Less ice means more exposed ocean water, which can lead to a greater uptake of carbon through increased air-sea gas exchange and via photosynthesis. Thanks to the team of Norwegian researchers, we now know that by the end of the century, the Arctic Ocean will be able to absorb as much carbon as is released by the U.S. over a two-year period. More than that, we now know just how much it is worth in dollars.

CO2 emissions impact the climate, economy, and our health. A concept called the social cost of carbon quantifies, in dollars, the economic damages caused by emitting more CO2 into the atmosphere. These values represent both the benefits of increased carbon storage, such as improved air quality, as well as the avoided cost of emission reduction policies.

Using the social cost of carbon, the Norwegian research team found that the increased absorption of CO2 in the Arctic Ocean due to melting sea ice has an economic value of $31.3 billion to $1.14 trillion.

While the Arctic might seem distant to decision makers in faraway capitals, the benefits of increased carbon absorption extend to their communities as they are able to spend billions, if not trillions, on other climate change policies. 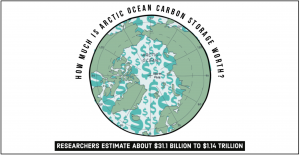 It’s Still Up to Us

While it is encouraging to think that warming temperatures may increase the ability of the Arctic Ocean to pull carbon out of the atmosphere, the researchers only anticipate that this positive effect will last until 2070. Because its benefits are temporary, we can’t rely on Earth’s ocean to save us from the impacts of climate change. Moreover, focusing just on the carbon storage capacity of the Arctic Ocean ignores the host of negative factors caused by increased carbon absorption in the ocean, such as ocean acidification, which have significant environmental and economic implications due to their effects on marine organisms and ecosystems.

This underscores the need for continued action, and there are various ways in which we can help. Make sure to call your local officials and advocate for increased federal funding for science, which will support deeper analyses of the social and environmental costs of climate change, as well as legislative action to combat climate change. Here at Bowdoin, we have been able to achieve carbon neutrality through converting buildings from oil to natural gas, purchasing renewable energy credits (RECs), and replacing thousands of lightbulbs with more efficient LEDs. On the individual level, there are well-known ways in which we can contribute to reducing emissions, such as walking, biking, composting, recycling, and reducing meat consumption. No matter what, we must take more action in our fight against climate change. As we continue to push for change, we now know that the Arctic Ocean will be on our side.