Mention talking fish and images of Finding Nemo tend to come to mind.  Although we won’t actually catch them saying “Just keep swimming”, we can catch them croaking, grunting, and squeaking – if we listen carefully.  A new study describes a novel method for capturing these subtle fish sounds.

Managing these marine protected areas requires monitoring vast areas and entire coastlines.  This monitoring traditionally takes the form of diver surveys, which are labor-intensive, expensive, and weather-dependent – all factors that limit how much territory can be covered.  Not to mention, fish tend to scatter when approached by a diver, making it rather hard to study their behavior.

An alternative approach is to track marine animals based on the sounds they produce.  Many marine fish, invertebrates, and mammals produce various sounds at different points in their life cycle.  In particular, fish are known to vocalize in tandem when feeding, spawning, and defending their territory.  (Fun fact: When the saltwater fish Gulf corvina convene off the coast of Mexico to mate every year, the din they produce is louder than a rock concert).  By keeping an ear out for this fish “chorus”, scientists can ascertain the timing of spawning seasons, species distributions, and fish habitat.

Over the past decade, researchers have explored using passive acoustic recorders to monitor marine animals (passive, because instead of emitting pulses of sound and measuring the echoes, the recorder listens to sounds generated by the underwater objects themselves).  While these recorders have mostly been deployed on stationary platforms, which requires knowing beforehand where the target animals are, researchers are exploring the use of autonomous mobile vehicles.  One such mobile platform, the Wave Glider, has already been to shown to be capable of monitoring marine mammals in deep water when equipped with acoustic recorders.

Monitoring fish in ocean waters closer to shore presents a trickier challenge.  These environments are noisier and shallower than the open ocean – and fish typically produce lower-frequency noise than mammals, making it harder to distinguish fish sound from ocean noise.  In a recent study led by Scripps Institution of Oceanography (La Jolla, CA), scientists attempted to see if Wave Gliders could be used to record fish choruses in nearshore waters.

The Wave Glider consists of a surfboard-shaped float, which rides the ocean surface, and a subsurface winged glider (“sub”), which is attached to the float via an umbilical tether.  No fuel is required for operation – the wings on the sub convert vertical wave motion into lift, propelling the Wave Glider forward.  The surface float contains satellite communications and control computers, as well as solar-panel powered batteries to power any sensors mounted on the sub.

The scientists attached an underwater acoustic recorder to the sub (travelling at a depth of 4 meters) and launched the Wave Glider from La Jolla, CA.  For fifteen days in the summer of 2017, the Wave Glider travelled down the southern California coast and back, passing through marine reserves and conservation areas with diverse assemblages of fish along the way.  En route, it traversed nearly 300 km at a leisurely pace of 0.9 km/h (0.6 mph).

The audio recordings were transformed into spectrograms and pressure spectral density curves.  A spectrogram (or “voiceprint”) is a plot of all of the spectrum of frequencies present during a given time period.  A spectral density curve displays how much energy is contained at each frequency.  This information can be used to determine the bandwidth of each chorus (which frequencies it contains), its duration, and the peak (most important) frequencies.  By comparing the acoustic characteristics of a measured chorus to those of known fish choruses, one can identify which fish species were present.

The Wave Glider captured a 200-hour long symphony of sounds, emitted by everything from surface crafts to dolphins to shrimp.  Fish calls were assumed to be the most notable sounds recorded below 1500 Hz.  Five distinct fish calls were identified, including one comprised of rapid croaks, and another more melodious one consisting of a long, continuous tonal with multiple harmonics.  Only one acoustic signature matched up to a known fish chorus.

In addition to collecting acoustic data, the team also compiled environmental data – kelp bed coverage and daily sea surface temperature – to investigate if these factors had any influence on where the fish tended to hang out.  Four of the five choruses were only recorded near kelp beds, suggesting that kelp is an important habitat for these fish species.  One chorus was only observed near an area with elevated sea surface temperature, indicating a preference for warmer waters.

All in all, the acoustic recorder-equipped Wave Glider passed its initial test drive down the Californian coast with flying colors.  The fifteen-day mission demonstrated that the platform can be used in surveys of coastal waters to reveal where fish are spawning, and to provide insights into the influence of various factors (such as kelp coverage and temperature) on where spawning grounds occur.  Future versions of the platform could include underwater cameras to allow visual identification of the species producing the observed sounds, allowing for the creation of a more complete catalog matching sound patterns to fish species.

The ocean covers two-thirds of the Earth’s surface, and locating specific marine species is akin to finding a needle in a haystack.  The mobile Wave Glider platform shows great promise as a method to streamline this task by providing auditory clues via a mobile acoustic recorder.  By mapping out fish spawning grounds and habitats, coastal managers can create appropriate protected areas and fishing closure regions.  ■ 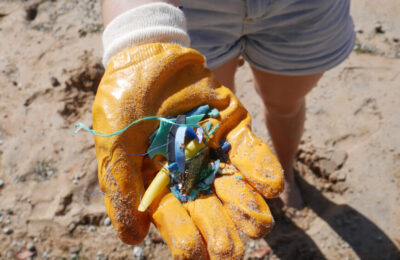