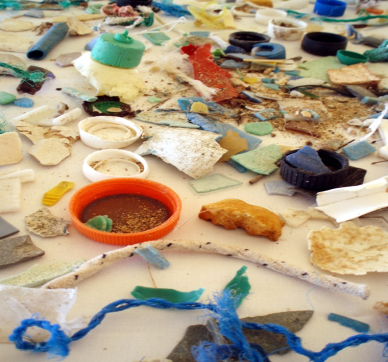 Microplastics in the oceans

Plastic debris are a growing threat to the world’s oceans. Poor disposal practices lead to eight million tons of plastic ending up in our oceans each year. The problem is only made worse as larger pieces of plastic are weathered and broken down into smaller particles less than 5 millimeters in diameter, known as microplastics. Their small size and wide distribution make microplastics a challenge to clean up. Scientists are concerned that these microplastics might present a threat to marine organisms, especially to animals that eat other very small particles. Specifically, some bottom-dwelling animals, like oysters, feed by filtering small particles like algae or phytoplankton out of the water. Existing research suggests that oysters are filtering microplastics out of the water, but are the microplastics having any negative effects on the oysters?

In a recent paper scientists from France found evidence that, at least at low numbers, microplastics are unlikely to be much of a problem for Pacific oysters. Previously, studies have shown that exposure to microplastics can cause problems for oysters, such as interrupting their reproduction. But here’s the catch: oysters can actually select specific particles to eat and are capable of rejecting particles with no nutritional value in what’s called pseudofeces (“fake feces”). This behavior makes studying how microplastics might affect oysters more complicated.

In the ocean, microplastics vary in size, shape, and in kind of plastic they are made of. It’s difficult to study this range of microplastics in the laboratory, so many researchers pick one size, shape, or type. However, this doesn’t represent what animals experience in the ocean. To better represent the environment Pacific oysters inhabit, the scientists ground a mixture of polyethylene and polypropylene plastics into varying shapes and sizes.

During the experiment, Pacific oysters were kept in aquaria and given a daily dose in their water (high, medium, low) of microplastics for 10 days, then allowed to feed normally for another 10 days. Researchers then measured the number of microplastics found in oysters or their feces and checked for possible health issues in the oysters.

No negative effects, but is this the whole story?

These results tell us microplastics pose a limited threat to Pacific oysters, but there are still a lot of questions to answer. For example, the study did not address exposure to microplastics over a long period of time, as would be expected for oysters in the open ocean. Microplastics can also be associated with chemicals or pollutants, which might cause health problems even if the microplastics themselves do not.

Either way, we should be conscious of our contributions to the global plastic problem. While oysters may be able to manage low concentrations of microplastics, the 8 million tons of plastic entering the oceans each year are causing serious problems for ocean ecosystems and other animals. There are plenty of steps we can take to reduce our plastic use, such as bringing reusable shopping bags, being conscious of buying single use plastic products, and advocating for better recycling programs. While some of these initiatives are more difficult in the COVID-19 era, there are always ways to reduce plastic waste.