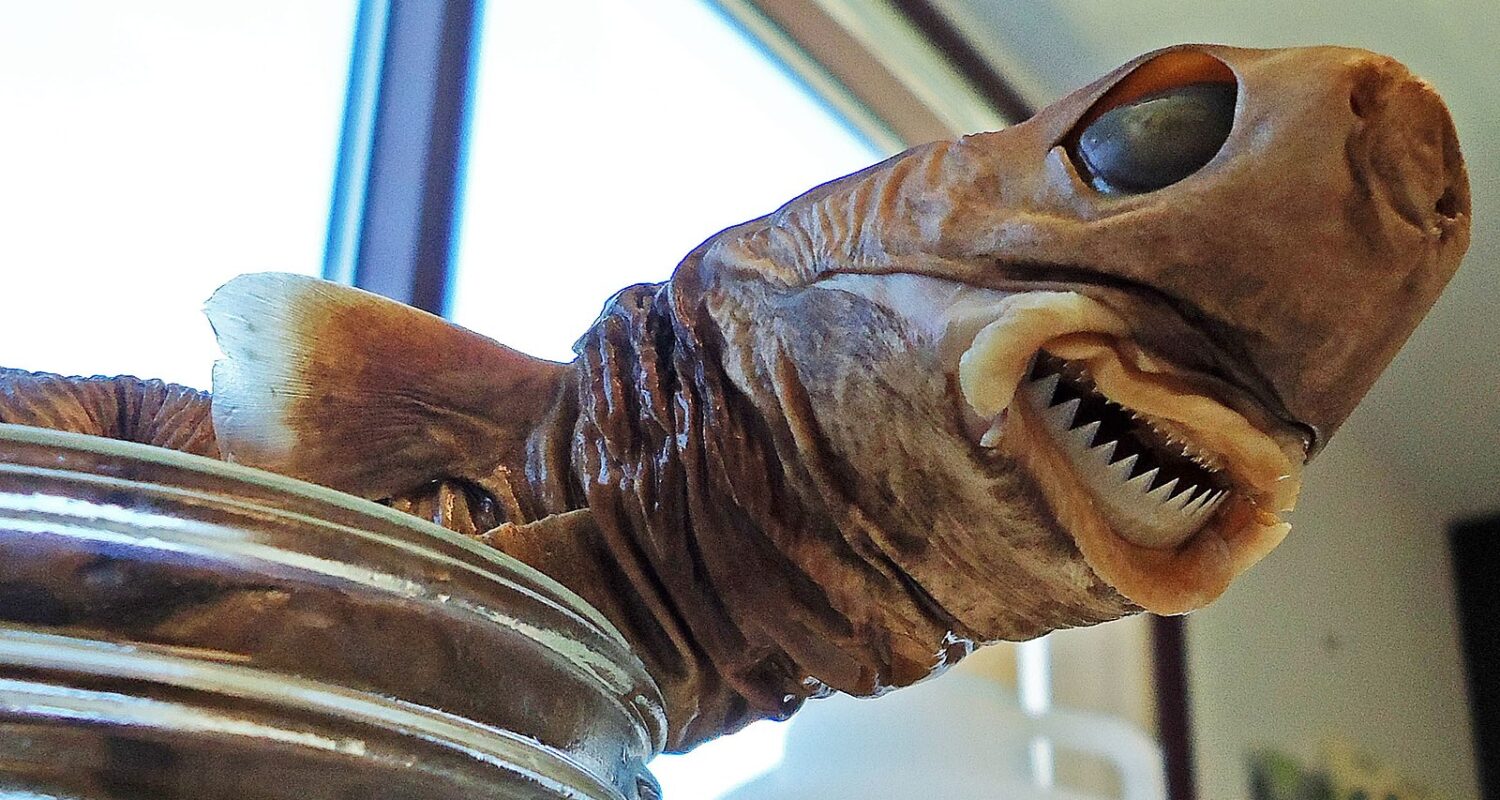 Swimming near the surface in the middle of the night, the cookiecutter shark (Isistius brasiliensis) seems helpless. The fish’s bioluminescent light, usually a sign of distress, attracts large predators like dolphins, orcas, and great white sharks. But far from helpless, the light lures their victims closer so that the cookiecutter shark can plan its attack. Like a cookie-cutting tool making an imprint in dough, the fused bottom teeth of these small 50 cm long sharks chomp at the flesh of large apex predators. Within seconds, the prey becomes the predator – or more accurately, giving that these sharks don’t kill their prey, the prey becomes the parasite.

From whales to great white sharks, to leatherback sea turtles, to submarines, and even the occasional human, scientists have documented the powerful bite of cookiecutter sharks. Despite these observations, very little is known about the animals’ diets. When they are not at the ocean’s surface, these sharks live 1,500 meters below sea level, making it is nearly impossible to monitor them.  To make matter worse, scientists who have studied the stomachs of cookiecutter sharks often find their stomachs empty and with no traces of their previous meal. Therefore, what cookiecutter sharks do and eat in the depths of the ocean remains a mystery. But a recent study from scientists at the University of Delaware helps shed some light on these mysterious creatures.

Chomping on Everything, Everywhere!

Scientists from the University of Delaware studied the stomachs of 14 cookiecutter sharks collected by the Monterey Bay Aquarium Research Institute from the Central Pacific Ocean near Hawaii. Although the majority of the stomachs were empty, scientists relied on new technology to infer the animal’s diet. They made use of Environmental DNA analysis, a new tool that allows scientists to extract DNA from any body of water. Environmental DNA is based on the idea that every organism sheds its DNA on its surroundings. Therefore, extracting the DNA present in the shark’s stomach allows scientists to identify the species present in any ecosystem.

The diet and habitat of cookiecutter sharks are just some of the many mysteries of the deep oceans. Despite major technological advances, deep-sea habitats remain poorly understood. With deep-sea fisheries and mining becoming more frequent it is important to make sense of deep-sea ecosystems so that we can protect them for the future. New technologies can help to study these rare organisms and their ecosystems so that we can make sense of it all.