The large, looming, distinctive shadow of a hammerhead shark darkens the coral reef. Smaller whitetip sharks find hiding places in the caves and crevices provided by the intricate structure of the reef itself. Even the small herbivorous fish are frightened, although they make too small a meal for the hammerhead to bother with them. The hammerhead is a transient predator here. It travels over hundreds of kilometers, stopping at reefs like this one to catch a meal or to take a turn at the cleaning station, where small fish scrape bacteria from its skin. Its presence disturbs every other living thing on the reef, but what would happen if the hammerhead never came through exerting its dominance?

Apex predators like hammerhead, tiger, and bull sharks, occupy the top level of the food web and have no natural predators of their own. They are, however, the targets of human fishing. Populations of apex predatory sharks have declined drastically since the 1950s as the demand or shark meat and shark fins has soared.

Many ecologists have hypothesized that the disappearance of large apex predators like hammerheads would result in a “trophic cascade,” affecting all levels of the trophic system. Here’s how it works: without big sharks preying on them, populations of smaller sharks and big fish called “mesopredators,” would increase. The greater number of mesopredators would then consume more herbivorous fish, which feed on algae. With fewer herbivorous fish munching on algae, the algae would take over the coral reef, outcompeting the slower-growing coral for space and curtailing the high amount of diversity that coral reef ecosystems support (Fig 1).

These types of trophic cascades have been documented in open-ocean and coastal settings and have even had economical consequences: between the 1980s and early 2000s, 75 percent of the large sharks on the east coast of the United States disappeared. This loss led to an increase in the population of rays that had previously been predated on by those sharks. Rays eat shellfish along the eastern seaboard and they eventually consumed so many that the North Carolina scallop fishery collapsed in 2004.

With these trophic connections in mind, coral reef conservationists have used reef sharks as their flagship species, arguing that protection of sharks will lead to healthier coral reef ecosystems overall. However, the connection may not be so simple. In their review of dozens of coral reef ecosystem studies involving 26 species of reef sharks, George Roff and his co-authors questioned whether sharks could really create trophic cascades in coral reef environments.

Even before humans started keeping records, they were taking sharks out of the water faster than they could reproduce. This makes it tricky for scientists to study the effects of overfishing and how it changes the whole ecosystem. There is not much data to look at before the overfishing began so instead, many studies use protected and unprotected marine areas to approximate what a single reef would have looked like before fishing and after fishing. Brilliant, right? You would expect the protected reefs to have more big sharks and the unprotected reefs to have fewer big sharks and to possibly see a trophic cascade in action: more big fish, fewer little fish, and more algae. But Roff found that unprotected reefs tended to have fewer species and the first and second tier spots in the food chain because they were more heavily fished overall. So it’s possible that a loss of apex predators led to a trophic cascade decades ago, but unfortunately, we’re too late to see it.

It’s also possible that sharks just don’t exert as much control over the entire coral reef ecosystem as the trophic cascade theory would lead us to believe. Large sharks at the top of the food chain tend to have wide ranges, only visiting a single reef on rare occasions. They may not be removing enough prey on each reef to make a difference. Mesopredatory sharks are the second tier of the food chain. They are smaller and stay closer to a single reef, acting as the top of the food chain on a reef. But there are usually many species of sharks and fish at this level, so removing one shark species is probably not very noticeable to its prey. Somebody else is still hungry for it. In this way, the complexity of a coral reef trophic system acts as a buffer against destruction in cases where one species is threatened or removed. Small sharks may be at risk from fishing just as much as the apex sharks, but if the numbers of one species decline, another species will still feed on the same prey, maintaining that trophic link.

Sharks are important to coral reefs and coral reefs are important sharks, so one can only be healthy if the other is. Reefs provide sharks with sources of prey, habitats for nurseries, protection from predation, and even fish that work to remove parasites from their skin. Sharks provide important services to the reef like cycling nutrients between it and the open ocean, removing invasive species, and removing weak fish carrying disease.

Conservation efforts for coral reefs should also include considerations for protection of sharks. Larger sharks are undoubtedly linked to the base of the food chain, but that link might not be strong and straightforward enough to directly impact that growth of algae. Restoring shark populations to their pre-fishing numbers will automatically reduce the algae cover. And rebuilding coral reefs will not automatically increase shark populations. We need to focus on conservation and protection from both ends if we want to restore healthy coral ecosystems. 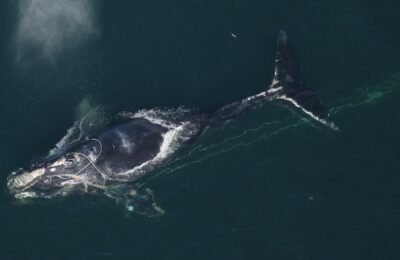