We humans are unique in our ability to observe, ask questions, conduct experiments, and formulate theories about our world and we’ve pieced together a complicated framework of knowledge in an effort to explain it all. Our viewpoint in this process has historically been that of the observer, particularly in the area of biology. We tend to place ourselves into one category and the rest of the animals in another, ignoring our common ancestry. However, with centuries of scientific study under our belts, we learn more every day that ‘animals’ are more like us than we thought.

For example, some of the factors that affect decision making in humans appear to be similar in other animals, and not just the ones we traditionally associate with higher intelligence (apes, dolphins, elephants, etc.). It would seem that the cuttlefish (Fig. 1), a marine mollusk belonging to the class cephalopod that includes octopuses and squids, has the ability conduct a type of risk management when making decisions about prey. Humans have been shown to make riskier economic decisions (albeit with a greater return) when they are hungry, and likewise cuttlefish hunting prey accept higher risk (with a greater return potential) the longer it has been since they have eaten.

For this study, Dr. Tsang-I Yang from the National Tsing Hua University in China led a series of experiments using juvenile cuttlefish (Sepia pharaonis) reared from eggs collected in the waters around Taiwan. Overall, 54 cuttlefish were used in experiments which forced them to make decisions on prey preference when faced with two choices. In order to accomplish this, the researchers used a special tank designed with a transparent, two-chamber insert that could be lowered in front of the cuttlefish (Fig. 2). In each of the chambers the researchers would place shrimp of varying quantity and size, and in some cases they would offer a choice between live and dead shrimp. Once the device was lowered, the cuttlefish would be faced with a decision that previous research has shown to be visually based.

In the first series of tests, different numbers of shrimp of similar sizes (approximately 50% of the length of the cuttlefish) were placed in each chamber to determine if cuttlefish were able to count. They were given choices of 1 versus 5, 1 versus 2, 2 versus 3, 3 versus 4, and 4 versus 5 shrimp with additional techniques designed to reduce the possibility that the cuttlefish were making decisions based on prey density (how closely the shrimp were clumped together) or prey activity (active versus inactive shrimp). Cuttlefish overwhelmingly chose the chamber containing more shrimp, even when the ratio of the choice was small (i.e. 4 versus 5 shrimp). Not only that, but cuttlefish actually perform counting rather than the act of subitization, which is the process of glancing at a group consisting of a few objects and knowing how many are there without actually counting.

Finally, the cuttlefish were given a choice between shrimp of different sizes, with each experiment conducted at two different states of hunger. The choice was between one large shrimp (approximately twice the size of the shrimp in the previous tests) and two of the smaller shrimp. Each cuttlefish was tested after having been fasted overnight to produce a state of extreme hunger, and also tested when they had eaten within the past 4 hours so they were hungry, but not starved.

While large shrimp provide more food than small shrimp, it is far more difficult (and often less successful) to catch one large, lone shrimp over one small shrimp among a group. This is where the cuttlefish must make a decision that is influenced by their state of hunger and requires risk mitigation. What the researchers found is that the cuttlefish that had been recently fed chose to attack one of the small shrimp in a group whereas a starved cuttlefish took its chances with the large, lone shrimp.

Just as in human economic decisions, the willingness of cuttlefish to take risks in catching prey depends on how hungry they are. When the cuttlefish is in a greater state of hunger, the risk of failure in trying to secure a larger meal appears to be more acceptable. 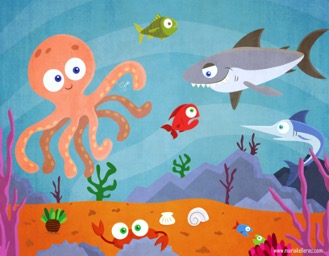