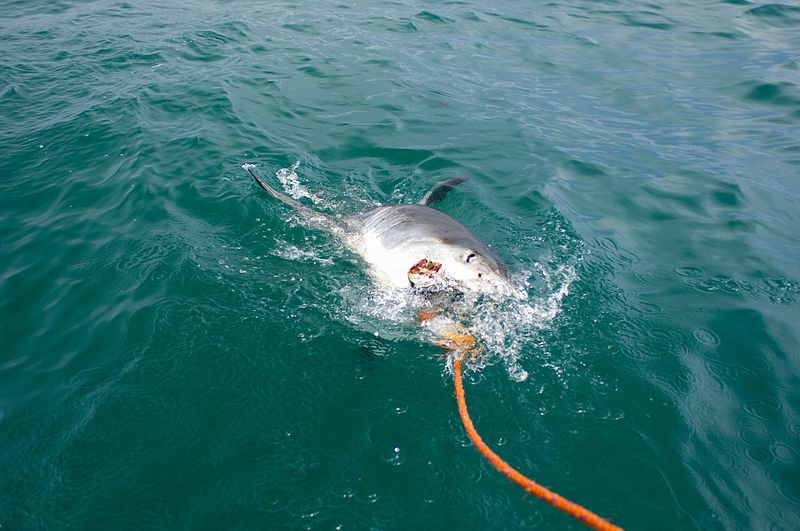 Imagine you are a fisherman, or a recreational fisher enjoying a day on the water. Your line has been cast and you are patiently waiting for the tug of a fish. After some time, you feel one! You excitedly begin to reel in your catch, but right before you can pull it out of the water, a shark comes by and eats part of the fish off your line. How would you feel? Excited about seeing the shark? Nervous? Disappointed that your hard-earned fish had been eaten?

The phenomenon of sharks eating fishes that have been hooked by humans is called depredation. While this may seem like a rare occurrence for the casual or non-fishermen, it is actually not that uncommon for career or long-term anglers. Researchers at the University of Massachusetts Amherst were very interested in learning how fishermen feel about this phenomenon, and if sharks constantly eating their catches would prompt any sort of action from these potentially disgruntled anglers.

To do this, the researchers conducted an online survey, reaching out to anglers over the age of 18, as well as fishing guides, who will typically chauffer clients or customers to different fishing areas. Survey questions asked participants how many times they had seen or experienced a depredation event, if they remembered anything about the specifics of the event, and how they felt the event shaped their opinions of sharks, their fish hauls, and certain actions surrounding conservation and human interests. The survey was sent to people from all over North America, but it was answered mostly by people from the United States, specifically on the East Coast.

Interestingly, the survey revealed that anglers and guides experienced depredation often, particularly in the Southeast United States. In this region, many guides and anglers had experienced depredation more than 20 times in the last five years. These events tended to spark negative emotions in both guides and anglers, with guides feeling slightly more anger, sadness, and distress at these events. Anglers, however, also experienced some positive emotions, such as excitement and awe. Perhaps more concerning was that guides and anglers stated they were much more likely to harvest sharks and target them when fishing recreationally because of depredation events, with guides again feeling more strongly. This doesn’t necessarily mean that guides are acting on these feelings and hunting sharks, but it does provide important information about the effects of these depredation events on guides and anglers.

These thoughts of more purposefully targeting sharks during recreational fishing events were found to be a direct consequence of how anglers and guides perceived sharks. When these people experience multiple depredation events, they view sharks as a threat to their livelihoods – losing out on potential money that could be made from bringing in fish, or fearing that clients will lose confidence in their ability to guide. There are also concerns that sharks are targeting too many of the fishes that these people rely on, which may not leave enough individual fish for human uses. Frequent inconvenience due to these events causes anglers and guides to not care about the safety of sharks, or their conservation.

Sharks are, without question, in trouble from a conservation standpoint. Many shark species are listed as endangered or threatened due to overfishing, exploitation, and accidental killings. They are typically not dangerous to humans, and provide important ecosystem services – picking off old and weak fishes, and ensuring that food webs stay balanced. Fishermen and fishing guides are the people who will most often be around these apex predators, so it is important that they can live relatively peacefully with each other. Finding ways to deter sharks from coming near fishing vessels so that depredation events don’t occur could be an option, as well as teaching anglers and guides the importance of shark conservation, so that they can be a bit more understanding when depredation events happen.