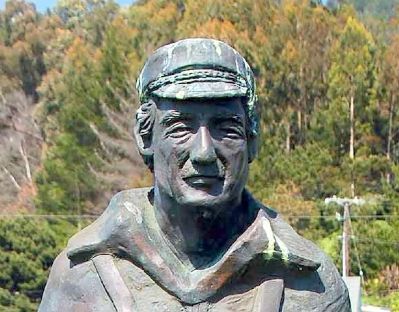 “A fishing community on the brink”

When academic researchers came to Shelter Cove, California– a small fishing village at the end of a long and sinuous forest road– they were warned that they’d be met with uncooperative, unhappy fishers.

These fishers were within reason to be unhappy. Shelter Cove’s fishing community had been through the wringer, enduring  several decades of declining fish populations and increasingly restrictive fishing policies. They’d lost local community leaders, political strength, and financial power to invest in a working waterfront. Access to fishing as a livelihood was floating further and further out of reach, and with that came a disintegration of the bonds that had once held Shelter Cove together.

But as researchers committed to long-term work in Shelter Cove, they saw that those early warnings were somewhat misguided. Yes, Shelter Cove fishers had reason to be upset– but over time, researchers also saw the beginnings of a transformation in this community. People began organizing, regaining access to the water, and feeling hopeful about the future. It seemed Shelter Cove was on the brink of dramatic, positive change.

Something interesting was happening in Shelter Cove, researchers realized. And they wondered: If you could look back and trace the spiraling down of the community, could you also look forward and see the ways it might be spiraling back up?

In their work with the Shelter Cove fishing community, researchers focused on the role of social capital in fishing communities. Just as financial capital deals with the financial resources available to an individual or group, social capital is a way of thinking about available social resources. Communities rich in bonding social capital are marked by high levels of trust and reciprocity between community members, shared norms, and density of connections. These characteristics can help build towards cooperation and collective action– basically, people working together to advance the good of the group. (Take note, though: bonding social capital is not a consummate good. It’s also associated with insular, exclusive communities and all the challenges those can bring.)

The rocky coastline of Shelter Cove was first (and remains) home to the Sinkyone people. Settlers arrived in the mid-1800s, and developed a commercial fishing industry over the following century and a half.

Back in the 1970s and 1980s, the fishing community was held tight by the “Mosquito Fleet”, the fleet that fished out of Shelter Cove. They earned the name “mosquito” because the fishers worked out of small wooden boats hat were easily swept by the wind. Rocky boats or no, they were successful, both in terms of fishing and building strong social capital— this period is remembered as one marked by fishers cooperating, helping each other out, forming a fishing association to build funds for improved infrastructure. One fisher and seafood buyer, Mario Machi, worked consistently to support the waterfront infrastructure and maintain a bustling marina. He is remembered fondly as a leader of Shelter Cove, and a core part of the community during the golden Mosquito Fleet era.

But change came to Shelter Cove. A series of events made it harder for the fishing community to thrive. Salmon and groundfish fisheries were restricted as salmon populations fell, and fishers had a hard time transitioning into other fisheries. With fewer fish coming into port, the Machi’s fish-buying business faltered; eventually the man himself passed away, leaving Shelter Cove leaderless. Local government leaders failed to fill the supportive space left by Machi. Maintenance and support for the waterfront marina declined.

By the 2010s, Shelter Cove’s bustling fishing community no longer had access to the ocean, a place to sell their catch, or even spaces to gather and hang out on the waterfront. The community was fracturing.

Spiraling up: Transformations towards a brighter future

The late 2010s saw a powerful shift in the social capital of Shelter Cove.

A number of events prompted this. The development of a statewide system of Marine Protected Areas in California brought Shelter Cove communities into contact and collaboration with university researchers and government officials, offering an avenue for fishers’ voices to influence policy. Fishers organized meetings and working groups in Shelter Cove to make the best of this avenue. Their organizing led to fundraisers to raise money for waterfront infrastructure, rebuilding access to the ocean and places to gather as a community. Social capital grew as people spent more time working together, organizing, fundraising, and celebrating their successes.

This was a dramatic transformation: once community organizing began, it took off quickly. Where community members once felt despair and hopelessness, they started to feel optimism and excitement. Where before they were fractured, now they were working together and seeing successes. As one recently departed community member reflected, it’s “amazing how little is required to change the posture.”

And those researchers? Through interviews and oral histories, they helped Shelter Cove tell the story of its remarkable transformation. They also worked side-by-side with community members to develop a “Fishing Community Sustainability Plan”, so ideas and reflections on social capital could be put into action. That plan will pave a way to sustained commitment to social capital, in the hopes of circumventing a future spiral down.