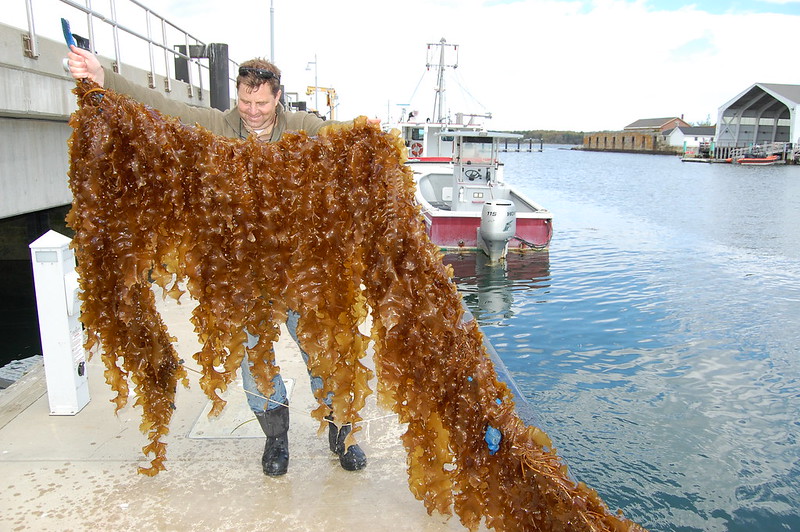 If you live in a coastal town, you’ve probably seen kelp floating offshore in shallow waters or washed up, stinky and slippery, on beaches. But did you know those same brownish-green algae have the potential to power cars, fertilize fields, and nourish human bodies? In the past decade, scientists have begun looking to kelp’s diverse ecosystem services as solutions to climate-related issues. In a recent study a group of Swedish scientists show that small-scale kelp farming—growing kelp from seed for industrial purposes and human consumption—has the potential to increase biodiversity in the area and has few negative impacts on the local ecosystem.

For centuries, Asian countries, particularly China and Indonesia, have cultivated kelp and seaweed for cuisine, but the idea is just beginning to take hold in Europe and North America. With the globalization of tastebuds, the market for kelp products in Western countries is growing, but it’s more than a tasty treat: kelp also improves the health of ecosystems and could serve as a valuable biofuel. It grows extremely fast, sometimes up to two feet per day, absorbing carbon dioxide from the air and providing shelter and food for a number of marine organisms. However, cultivating kelp in a region where no kelp exists could lead to disruptions in the local ecosystem.

The Swedish team from the University of Gothenburg set out to measure what effects, positive or negative, kelp farms have on ecosystems. They published their results in June 2020 in Marine Pollution Bulletin. They quantitatively assessed the effects of a two-hectare kelp farm before and after the establishment of kelp and compared the results to four control, or natural and undisturbed, sites. The farm and the controls follow the coast of an archipelago that comprises Kosterhavet National Park off the west coast of Sweden. The team collected spores from the local sugar kelp (Saccharina latissima) and seeded them on long lines attached to buoys.

By examining the sites’ benthic fauna—invertebrates that live on or in the sea floor sediment—the scientists monitored changes in the health of the ecosystem using a known index. In other words, the index tells them how healthy the ecosystem is (bad, poor, moderate, good, or high) based on what kinds of critters they find on the sea floor. At the farm site, the health of the ecosystem increased from “poor/moderate” to “good” after the kelp was fully grown, and several species of invertebrates, including brittle stars, sea urchins, bristle worms, and horseshoe worms, increased in number. There was no change in ecosystem health over time at the control sites.

The scientists also found that dissolved oxygen and nutrients remained constant at both the kelp farm and the control sites, providing further evidence that kelp farms would not decrease the oxygen and nutrients available to other inhabitants of the coastal waters. They did, however, note that light reaching the sea floor decreased by 40% at the peak of kelp growth, but the team says this should not negatively impact bottom-dwelling plants since the kelp will be harvested shortly after it reaches its highest biomass.

Seaweed farming is the fastest growing sector of aquaculture in the United States, and its potential as a food source, biofuel, and fertilizer is promising. Kelp, unlike corn and soybeans (the current source of most biofuel), requires few outside inputs, like water and fertilizer. Because kelp is grown in the ocean, valuable farm land could be freed up for cultivating food for consumption instead of fuel. In addition, harvesting kelp and composting it on land could produce a hearty fertilizer for crops. Some scientists also propose that kelp farms could shrink coastal dead zones—areas where fertilizer runoff has caused large algal blooms that deplete oxygen from the water when they break down—by absorbing extra nutrients from waters near agricultural areas.