Many health organizations recommend eating fish at least twice a week and at least one of those servings should be oily fish. Oily fish such as salmon is the main source of healthy omega-3 fatty acids, specifically docosahexaenoic (DHA) & eicosapentaenoic (EPA). These three-letter fatty acids have been linked to reducing the risk of cardiovascular disease, inflammation, and depression, as well as contributing to the development and function of the brain and eyes. However, salmon is increasingly being farmed instead of being wild-caught, and herein lies the salmon rub: the nutritional content of farmed salmon is changing.

Similar to humans, salmon cannot create DHA & EPA in their bodies very well, so they accumulate the healthy stuff from their diet. Traditionally, feed for farmed salmon consists of fish meal and fish oil which is made from small, wild-caught ocean fish high in DHA & EPA, but the costs of fish oil are rising due to a growing demand and a limited supply of ocean fish that are also being negatively hit by climactic events. Fish farmers have started to look for alternative ingredients to relieve pressure off wild fish populations and to save money. Plant-based oils—mainly rapeseed oil due to its wide availability and low cost are increasingly being substituted for fish oil. What are the consequences of shifting a salmon’s natural marine-based diet to land-based one? While this has been covered theoretically in the past on oceanbites here, Sprague et al., hit the fish farms and grocery stores to analyze the fatty acid profiles of more than 3,000 farmed Atlantic salmon in Scotland between 2006-2015. Here is what they found.

The increasing plant-based diet had no negative effects on the health or growth of farmed Atlantic salmon in Scotland, and as a bonus, there were less contaminants such as dioxins and PCBs than were found in wild fish. However, ‘terrestrial’ fatty acid levels such as oleic and linoleic acid roughly doubled in the salmon while ‘marine’ fatty acid levels such as DHA & EPA fell from 2.74g in 2006 to 1.36g per 100 grams wet weight—see Figure 1. What this means in practice is pretty shocking: one portion of Scottish farmed Atlantic salmon in 2006 would have met the recommended intake by the European Food Safety Authority, but to get the same nutritional value in 2015, one would have to eat twice the amount.

Should we stick with wild salmon to get our omega-3s? Well, it’s not quite that simple. Farmed Atlantic salmon was found to contain more fat overall (~12-13%) that can be less healthy than wild salmon (~4%). However, because farmed salmon has a higher total fat content, it tends to have more omega-3’s. And even though the DHA & EPA levels of farmed Atlantic salmon in Scotland have been decreasing, the salmon still had significantly higher DHA & EPA content than wild salmon, let alone most other fish species and all land-based protein.

So what should we be feeding farmed salmon? One strategy is to use a plant-based diet initially, then switch to a marine-based diet a few weeks before harvest to boost the DHA & EPA content. While this is an achievable short-term strategy, it will decrease the amount of fish oil needed for fish feed, but not completely eliminate it. In the ocean, microalgae is the initial source of omega-3’s which accumulate as EPA & DHA in the bodies of fish—specifically oily fish. While there have been promising trials using microalgae for fish food (see this post), this development is still in its infancy, but could be a potential solution once production is scalable and costs are driven down. Another strategy is to genetically modify land-based crops to create EPA & DHA. This development is also in early stages, yet it would also require a change in public perception of genetically modified products to be adopted.

Bottom line: It is still beneficial to eat farmed Atlantic salmon to get omega-3s…for now. However, this study highlights the importance of continuing to analyze the health consequences of changing inputs in any food production system. 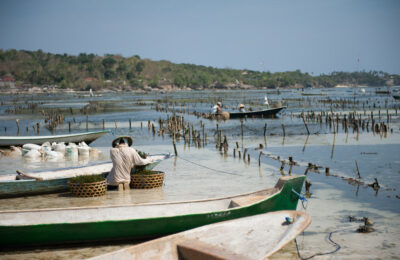