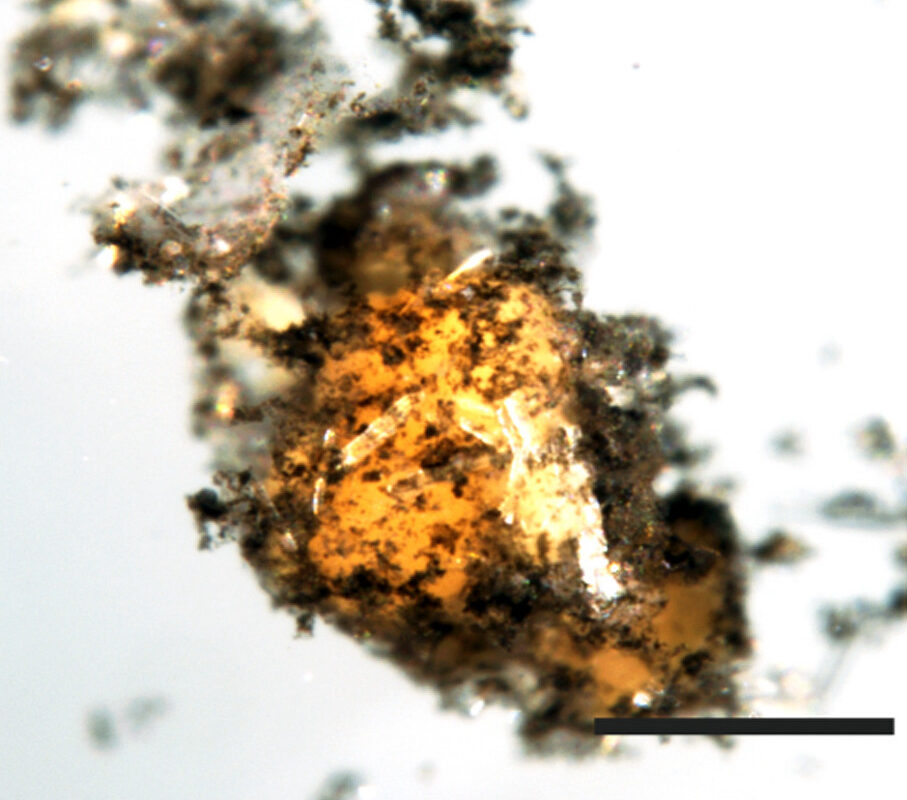 An international team of scientists from the United States and Germany has discovered that elemental carbon can be produced by specialized groups of microorganisms living in the seafloor. While the element carbon is found in all forms of life, and many organisms produce carbon-containing compounds (like sugars), the carbon in those compounds is always bonded to other essential elements, such as hydrogen, nitrogen, and oxygen. Elemental carbon is carbon that is bound only to other carbon atoms.

Elemental carbon is found in nature in many forms, sometimes in crystalline forms (like diamond and graphite), and sometimes in amorphous forms without a crystalline structure (like soot). Both forms were thought to be made abiotically; crystalline forms are made under intense pressures and temperatures, and amorphous forms by the burning of organic material. Before now, there was never evidence of elemental carbon being produced by a living organism.

In a laboratory in Germany, fine black specks were observed in two separate sets of microbial cultures – one obtained from hydrothermal sediments in the Gulf of California, and one from cold seep sediments in the Mediterranean Sea. (Hydrothermal vents are places where geothermally heated water emerges from fissures in the ocean crust, while cold seeps are places where cool, hydrocarbon-rich water emerges.) The cultures had been cultivated for several years before the team observed the black specks; methane, carbon dioxide, and other nutrients had been added occasionally to stimulate growth. In cultures where cells had been killed off, the black specks were absent, indicating that it was produced by microorganisms.

To determine the nature of the black material, the researchers exposed it to various acids, bases, and organic solvents. Because the material was highly unreactive to these chemicals, the team hypothesized that the material was elemental carbon, and tested this theory via energy dispersive x-ray spectroscopy (EDS). This is a technique which analyzes the elements within a sample, and in this case, it revealed that the black material was indeed made of elemental carbon, as well as a small amount of pyrite (fool’s gold). Further investigations with Raman spectroscopy – which is an analysis of molecular structure – proved that the elemental carbon was in an amorphous, rather than a crystalline, form.

While the lack of amorphous carbon in cultures with no microorganisms indicated that the carbon was biological in nature, the research team wanted to determine which microorganisms were responsible. To figure it out, they turned to isotopic analysis.

Isotopes are different forms of the same element, with a different number of neutrons. Carbon-12 has 6 protons and 6 neutrons, while carbon-13 has 6 protons and 7 neutrons. As a result, the mass of two different isotopes is infinitesimally (but measurably) different. By analyzing the isotopic composition of the elemental carbon in their cultures, the team determined that there was far more light carbon (C-12) in the black specks than would be expected by random chance. In fact, the amorphous carbon could only have the measured C-13/C-12 ratio if it had been produced by organisms called methanogens or methanotrophs.

And it just so happened that these microbial groups were present in very high abundances in both seafloor cultures.

Despite providing evidence that methanogens and methanotrophs produce amorphous carbon, the research team is still unsure WHY the microbes do this. They suggest that the amorphous carbon could serve as a shell of protection against environmental toxins, or perhaps as a conductor. (This group of microorganisms is known to transfer electrons from cell to cell for energy.)

Whatever the reason, the research team believes that this finding has important implications for the carbon cycle. The methanogens and methanotrophs in question are widely distributed across the world, and the elemental carbon they produce may remain in seafloor sediments over long, geologic time scales. This would represent a previously unrecognized carbon sink, given that the carbon is trapped far away from the atmosphere.

Evaluating the strength of this carbon sink, however, would require more research to determine exactly how and why this unusual substance is being produced in such an unlikely place.