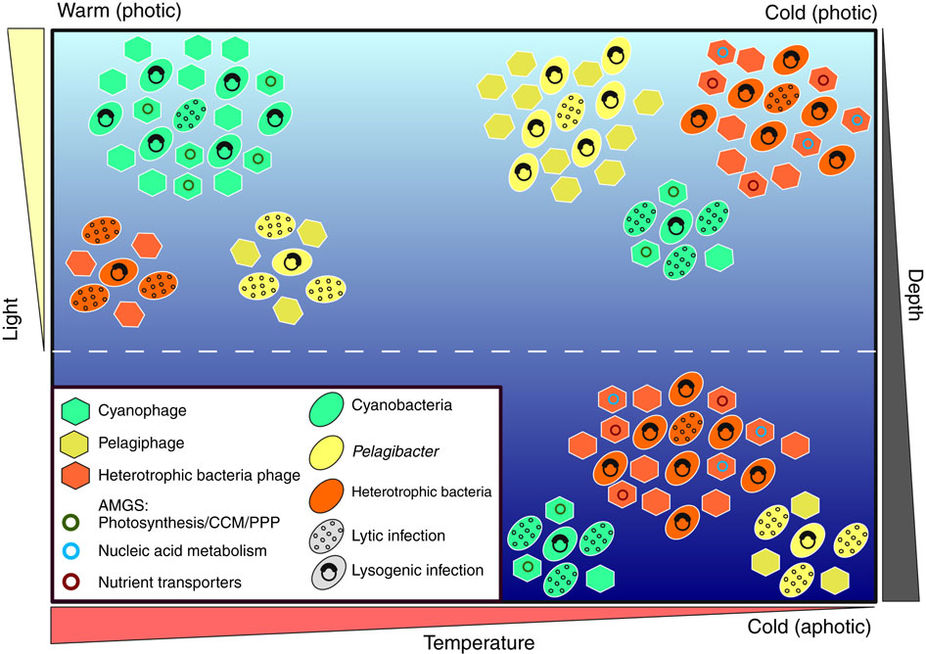 Viruses. That word elicits fear, disgust, involuntary shudders. While viruses are known for causing flus, colds, and worse, not all viruses are bad. Recent medical advances, like using the CRISPR technology, are because of viruses! Viruses also don’t only infect animals, too. A whole class of viruses, called phages, infect only bacteria. These phages are widespread and common in the ocean, and are fundamental to the oceans’ inhabitants.

What are these ocean viruses doing? There are a lot of bacteria for phages to infect, and there are about 10x as many viruses are there are bacteria! If a phage infects a bacterium, the phage can kills it, releasing nutrients from the dead bacterium. Then, other microbes can use these nutrients for food. Viruses can also act as important control on how big a population of Bacteria can be. Essentially, phages are helping the oceanic ‘Circle of Life’, but unfortunately without the Lion King soundtrack.

While being infected sounds like trouble for the bacteria, it’s not always a bad thing. In many cases, the viruses actually want the host bacteria to do well – otherwise they have nothing to infect! Some viruses do not immediately kill their hosts. Instead, they put their genes in with the bacteria’s genes, where they can stay for long periods of time (see Figure 2 to learn more about how viruses and their hosts interact). When the viruses do this, the viruses can make their hosts better adapted to survive by carrying genes that let the host eat new types of food, or survive certain environmental conditions better.

The study: An international team of scientists lead by Felipe Coutinho set out to examine marine viruses. Coutinho and his colleagues determined what bacteria they infect, what effects the viruses have on the host bacteria, and what controls these marine viruses. To do this, they examined previously collected virus samples taken all over the ocean. The scientists carefully looked at the types of phage viruses found in their datasets. They used information in the DNA sequences to figure out what kind of Bacteria the viruses infected, and what kinds of functions the DNA could make the host Bacteria have.

What they found: The scientists found many marine viruses that had never been seen before. They also found many new types of proteins, though we still do not know what those proteins do. These new viruses were found to infect all sorts of bacteria – from photosynthetic bacteria called Cyanobacteria who feed the ocean to the dark dwelling microbes who live hundreds of meters below where the last light penetrates water.

Location, Location, Location: Location does not matter only in real estate; location is critical in where organisms live, too. Using statistical techniques, the scientists grouped virus samples by similarity, displayed it a plot, then color coded the sample points by variables like the amount of light received, the temperature of the water, and the season. The viruses showed patterns corresponding to the environmental variables. When water was warm or well lit, more of the viruses had hosts that were photosynthesizers. When water was colder or dark, more viruses were specific to heterotrophic microbes that eat things produced by other organisms. In fact, the scientists found that sunlight and temperature were the biggest factors in determining where viruses were found. This was because the viruses followed the bacteria they infect, and the bacteria responded to sunlight and water temperature.

Do what to the winner?!? One idea about the relationship between hosts and viruses in the ocean is called Kill the Winner. This is a dramatic way of saying that as a type of microbe grows quickly, viruses that target that microbe kill them quickly. A more recent hypothesis about host-virus relationships in the ocean is called Piggyback the Winner. This hypothesis says that if a type of microbe grows quickly and is very abundant, the viruses that infect that microbe do not kill them. Instead, the virus will ‘hide’ in the microbe, and ‘piggyback’ on the microbe’s success during the lysogenic stage of virus existence. This way, as the microbe grows and replicates itself, the virus will be replicated as well, so all of the children microbes will have copies of that virus. The microbe will stay quiet in the host until the host microbe does poorly. At this point, the virus jumps ship and becomes destructive, killing the host.

Not all viruses are able to stay quiet in the host, and special genes can indicate that a virus has the capacity to hide in this way. In this study, the authors found many of the viruses had these special genes that let viruses’ DNA jump in and out of the host’s DNA. This supported the Piggyback the Winner hypothesis.

This study sheds a lot of light on where viruses in the ocean are, what they infect, and how they help (or hurt) bacteria. This is important for people studying the oceans to figure out why we have booms and busts of some organisms, and not other. The infection of photosynthetic organisms can impact how much food is available to larger organisms further up the food chain, too. Especially interesting is how the environment, like light amount and water temperature, change the types of bacteria and viruses in the ocean. This is important to know as our climate warms.