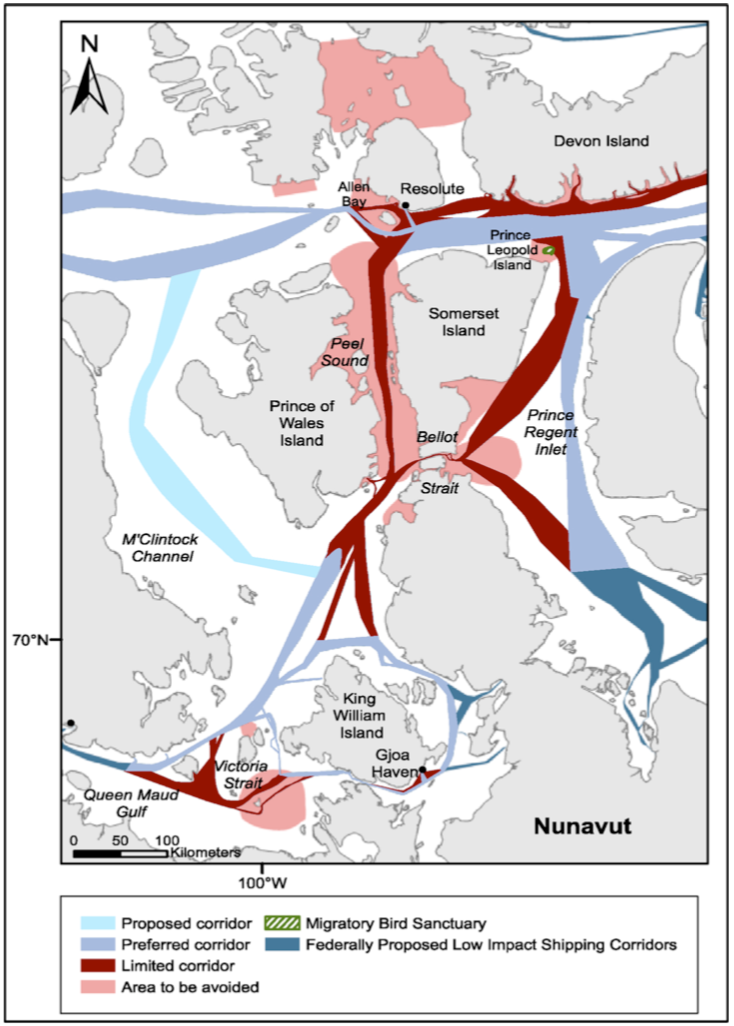 When it comes to the waters of Arctic Canada, there’s no smooth sailing. These waters are often ice-covered, even in the middle of the summer. Vessels in these areas face the risk of colliding with icebergs or becoming entrapped in ice. For Inuit communities indigenous to these seas, millennia of experience and observation have provided the knowledge needed to travel safely in this area.

In the 19th and 20th centuries, European traders sought a way to navigate these seas. In spite of their lack of long-term knowledge of the area, traders successfully created a route called the Northwest Passage that linked the Pacific and Atlantic Oceans. However, the challenges of sailing through icy waters meant that this route was often too dangerous to use.

Today, that’s changing. Climate change is dramatically impacting the ice of Arctic Canada. Ice cover declines every year, and summers in this historically icy waterway are expected to be totally ice-free by 2030. As a result, Arctic shipping is already increasing. The total distance travelled by ships in Arctic Canada tripled between 1990 and 2015.

The Canadian government is well-aware of the interest in using these waters for shipping. Three government agencies came together to develop a plan for routing the increasing ship traffic through the Arctic waters, creating Low Impact Corridors that avoid undue harm to people, wildlife, and ships.

But there was a problem in the Low Impact Corridor planning process. In the initial development of proposed corridors, government officials failed to involve indigenous perspectives, despite the fact that the proposed shipping corridors pass through large areas of Inuit homelands, Inuit Nunangat. Coastal Inuit communities will be directly impacted by increased shipping. Plus, these communities hold important knowledge about the area, given their long-term presence there. Without Indigenous voices involved in planning, the government missed out on the knowledge of people who know these areas best.

Seeking to address this gap, fourteen Inuit communities joined with a team of researchers and Canadian governmental agencies to gather feedback on the proposed corridors through a participatory mapping process. In this approach, community members shared their ideas in workshops. They added their perspectives to the government maps, annotating and redrawing corridors based on human use, wildlife presence, and the impacts of ship traffic through these areas.

Throughout their recommendations, Inuit community members noted the close ties between wildlife and humans in Arctic Canada.  The noise and activity of passing ships could disturb beluga, narwhal, and bowhead whales, ringed and bearded seals, polar bears, and a number of sea bird and fish species . Community members pointed to long-standing prohibitions against even dropping a rock or whistling around important habitats, because it might scare away wildlife. Shipping noise, in comparison, is deafening. Communities recommended moving shipping corridors away from the most sensitive ecological areas and urged investment in quieter ships overall. This is not just for the sake of wildlife but also for  human health; many Inuit communities rely on subsistence hunting. Protecting wildlife helps protect local food security.

In addition to protecting species, community members stressed the importance of maintaining sea ice whenever possible. In Arctic Canada, sea ice is a crucial resource for both humans and wildlife. It’s called an “ice highway”, as humans, caribou, and polar bears navigate across frozen expanses. Ice melt due to climate change is a major concern for wildlife connectivity, food security, and well-being. Ships can exacerbate the ice break-up that’s already happening. Even when ice refreezes after a ship passes through, it can reform with fracture lines and contours that make it difficult for humans or animals to cross. Some community members reported returning from a hunting party and found that a ship had broken the ice along their route home. With fuel and supplies, they were able to wait for it to freeze again before  crossing safely, but other hunters might not be so fortunate.

These recommendations also revealed important safety considerations for the ships themselves. Most of the existing nautical charts for Arctic Canada’s waters were created in the late 1800s and early 1900s. Only a quarter of the proposed corridors have been surveyed at the modern level. In making recommendations, participants noted places where corridors overlapped with particularly rough seas. For example, community members shared oral histories that describe icebergs being sucked underwater at the mouth of Bellot Strait, posing invisible hazards to passing ships. This sort of knowledge isn’t captured in government maps and surveys. Community members recommended ships avoid the strait all together, or at least communicate frequently with the Canadian Coast Guard and local communities for the current status of their routes.

Past and Future Progress

There is already evidence that shipping companies are taking Inuit community recommendations seriously. In 2017, a mining company that operates in the area made plans to start winter shipping to and from their mines, but after hearing community feedback about the negative impacts of ice break-up, they abandoned that plan.

These decisions come with a host of complicated trade-offs for the local communities. For example, in several places community members recommended ships take longer routes to avoid sensitive areas— but they recognized that longer routes will require more fuel, more emissions, and higher costs of transported goods. Navigating these trade-offs is an important part of community planning.

So what does the future look like for the waters of Arctic Canada? Perhaps the only thing that can be said for certain is that conditions will be different. Recommendations will have to be continually reconsidered, because the social and ecological effects of a corridor are sure to shift. Through layering maps with different types of knowledge, Inuit communities and the government are crafting a shipping plan that is responsive and dynamic. In a rapidly changing world, this participatory process might offer the best chance for successful adaptation.