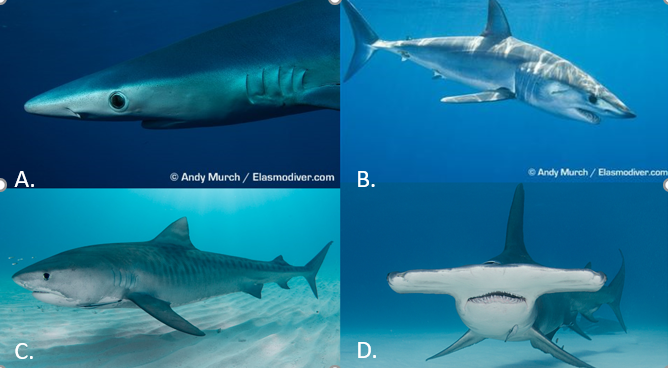 Pelagic sharks have long captured the imagination of society. Simply reading Ernest Hemingway’s The Old Man and the Sea conveys some of the aw of one pelagic species; the charismatic mako shark (Isurus spp.). Those individuals who have seen mako sharks or blue sharks (Prionace glauca) will struggle to find words to describe the beautiful, deep intertwining shades of blue on these animals. Yet, the high seas or pelagic waters are home to many other species of alluring shark. The tiger shark (Galeocerdo cuvier) and the great hammerhead shark (Sphyrna mokarran) are just two of the large, enigmatic species that often travel the high seas after leaving coastal waters.

Longline fleets often set lines in excess of 100 kilometers or 62 miles with roughly 1,215 hooks on each line in the high seas. For the greatest success, fleets often travel to highly productive areas that have high thermal fronts or warmer surface temperatures. Because productivity and thermal fronts are always shifting in the ocean, fishing fleets travel vast distances each season. These fleets target large commercially valuable tuna and swordfish but declines in these populations and increased management have led to increased targeting of oceanic sharks.

Pelagic sharks and commercial fishing fleets often inhabit the same waters. The overlap in fishing location and habitat use between the sharks and longline fleets results in tens of millions of sharks being caught each year. Pelagic shark populations are not robust when faced with fishing pressures, in part because they are caught at high rates and have slow reproduction. Despite the substantial number of sharks caught by high seas long liners, very little is known about how extensive shark habitats and fishing grounds overlap.

Historically, poor record keeping, lack of reporting, or even misidentification of sharks has led to a knowledge gap for the best way to manage pelagic sharks. Developments in satellite tracking and global position systems (GPS) allow researchers to track shark movements and ship movements in the high seas with greater accuracy. These new tools create an opportunity to study the overlap between fishing effort and shark movements.

This study had two primary goals related to pelagic sharks and fishery exposure. The first was to assess the extent that pelagic shark movements overlap with the Portuguese and Spanish longline fleets. Unfortunately, the national longline fleet GPS data is typically not available to the public resulting in only the Portuguese and Spanish fleets being included and not the Japanese, Canadian, or American fleets that fish the Northwestern Atlantic. The second was to determine which locations have the longest persistent exposure of sharks to fishing fleets. A secondary objective of this study was to assess the vulnerability of different pelagic shark species to fishery pressures and how different management practices may address creating a sustainable fishery. Blue and mako sharks account for roughly 95% of the oceanic sharks caught in Atlantic fisheries. Due to the high catch rate of these two species relative to others, they were the focus sharks in this study when comparing overlap.

Overall there are three areas in the North Atlantic where the two fleets concentrate their fishing effort: the central Atlantic adjacent to the Gulf Stream near the Azores, an area west of the Iberian Peninsula, and areas off of Africa’s northwest coast. The Gulf Stream and Iberian Peninsula were targeted seasonally with fleets fishing in the north during the summer and the south during winter. These areas had higher productivity and frequent thermal fronts during different seasons. Interestingly, the waters off North Africa are fished year-round due to an upwelling current. An upwelling current brings waters rich with nutrients from the bottom of the ocean to the surface and often result in highly productive areas.

Satellite tag data was collected from 99 sharks representing 7,990 days’ worth of information. Of the 99 sharks the average track time was roughly 80 days. Sharks showed a broad distribution in the North Atlantic favoring productive habitats. Of the four species of oceanic sharks; mako, blue, and tiger sharks all showed seasonal movements. Mako and blue sharks favored northern latitudes during warmer months and southern latitudes during cooler months. Tiger sharks travelled towards oceanic habitats near the Gulf Stream during the summer and returned to the tropics in the winter. Great hammerheads remained near continental shelf environments in spite of changes in season. Despite broad oceanic travels, tagged shark movements revealed areas where sharks would accumulate in greater densities called “hot spots”. These habitats tended to be highly productive areas and had unique thermal fronts relative to the surrounding ocean. Remarkably, the central area of the Gulf Stream and the area west of the Iberian Peninsula were hot spots for sharks mirroring those for long liners.

When analyzing the overlap between pelagic sharks and long liners the authors separated the North Atlantic into a grid with squares 1° latitude x 1° longitude. From here they calculated the chance that a shark and long liner were in the same grid square at the same time. The authors only examined overlap in relation to mako and blue sharks for this article because these species account for over 95% of pelagic shark landings and the long liners tended to concentrate effort in areas where the authors had predominantly tagged these species.

Roughly 80% of the tracked range for mako and blue sharks was paralleled by Spanish and Portuguese long liners. Going a step further, the observed overlap linked seasonal shark hot spots and areas of high fishing effort. Specifically, the Gulf Stream and area west of the Iberian Peninsula accounted for the majority of overlap. The authors hypothesize that this may be due to the active behavioral preference for thermal fronts and productive waters by sharks. Longline vessels often target these same waters because of the high frequency of large marine predators. Additionally, longline fleets adjust their fishing location seasonally to follow productive fronts and large marine predators. The similarity in movement patterns between sharks and longline vessels resulted in blue sharks being exposed to capture 20.2 days and mako sharks being at risk 12.2 days a month in a high space-use area.

While this study provides some crucial insight for understanding pelagic shark exposure to longline fisheries, the authors noted that there are still significant gaps in understanding the relationship between longline fisheries and pelagic sharks. In the second figure showing fishing activity in the Northern Atlantic, the Western North Atlantic appears as if it is not fished. However, this area is fished heavily by Japanese, American, and Canadian fleets. Unfortunately the authors were not able to obtain the data for those fleets. The result is that fishing pressure in the North Atlantic is underestimated at best. Despite underestimating fishing impact on oceanic shark species, the authors were able to recommend possible solutions to create sustainable fisheries. These solutions were varied and included discussions on marine protected areas, selective fishing gear, or catch limits. The authors note that a key focus on international management efforts is required to create a sustainable fishery in the North Atlantic high seas for the future.