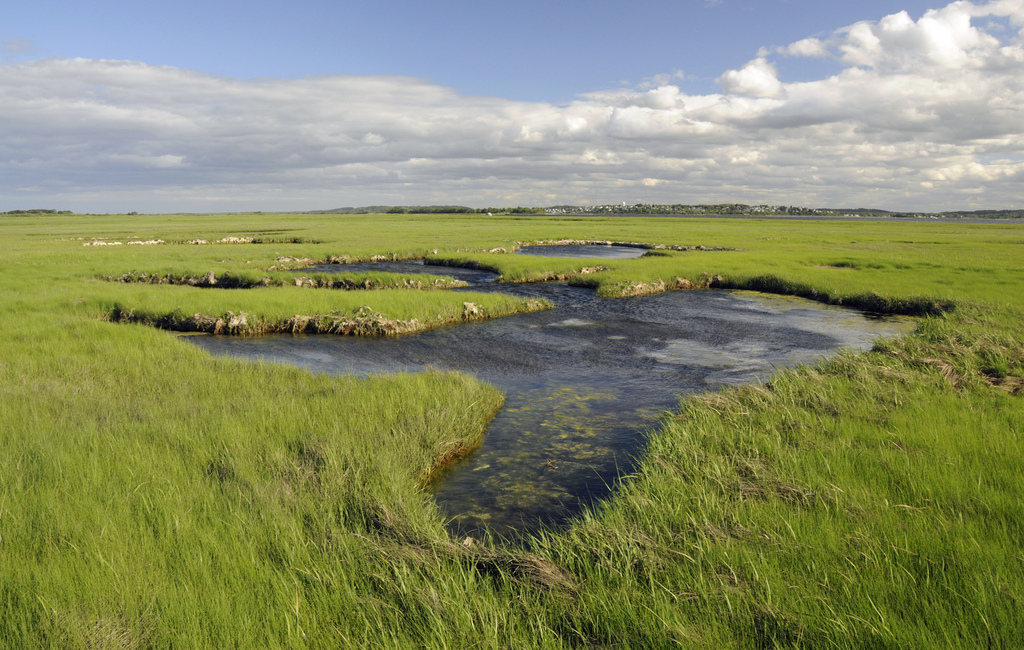 In between our cities and the open ocean waters lay one of the most important habitats on earth: salt marshes. These are highly productive ecosystems characterized by dense stands of Spartina, a salt marsh grass that is found throughout various coastal marshes. Spartina, which acts as an important habitat for many species, contributes diverse food sources in the form of nutrient-rich detritus (organic matter produced by the decomposition of organisms) that awaits hungry fish and crustaceans. In addition to supporting local fisheries, salt marshes provide important ecosystem services, which are benefits we enjoy for free, including water purification and coastal erosion protection.

Despite the important ecosystem services they provide, many salt marshes worldwide and even in the US, are threatened. Some of the major culprits of marsh degradation include coastal development, agricultural land use, hydrologic alterations, and pollution. What can be done to potentially undo the harm that has beset our important coastal salt marshes?

Just as clear-cut forests can be re-seeded, degraded marshes can be restored. The goal of marsh restoration is to recover the ecological structure and function of natural habitats. For instance, if a degraded marsh once provided habitat for juvenile fishes and served as a buffer between the coastal waters and upland areas, then restoration efforts would focus on recreating ideal habitat for fishes by using natural soils and sediments to reestablish marsh habitat.

But once a marsh undergoes restoration, how can we actually measure how that marsh is doing, say in comparison to a reference natural marsh that is least affected by human activities? Post-restoration monitoring is essential for evaluating the success of restoration projects and improving restoration practices. Monitoring includes measuring certain metrics of ecological structure such as species diversity and abundance. In addition to assessing community metrics, it is also important to evaluate the recovery of ecological functions, such as nutrient cycling and food web structure. We care about food web structure because many of the marine fish and crustacean species we want to protect depend on a stable resource base to maintain their populations.

However, evaluations of post-recovery food web structure are rarely undertaken by researchers.

To address this knowledge gap, the present study surveyed a recently restored marsh and a natural “reference” marsh in the Nueces Bay area of Gulf of Mexico to evaluate the short-term ecological success of restoration.

Gulf of Mexico-Salt marshes in peril

To assess marsh food web structure, the researchers measured macrofaunal (fish and crustaceans) abundances and species diversity with a benthic (bottom) tow net from randomly chosen sites within the marsh restoration area and a natural reference marsh. Since salt grass (Spartina) is an important component of marsh food webs, the researchers also measured the density and biomass of this plant. To account for nutrients and primary producers in the sediments of each marsh, benthic sediment cores were also collected. From the sediments the authors also measured organic carbon, nitrogen, and detritus content, as these nutrients are important in fueling marsh food webs. After collecting fish, crustaceans, sediments, and Spartina stems,, the researchers used a powerful tool called stable isotopes analysis to find out more about energy flow in each marsh.

You are what you eat: using stable isotope analysis to understand marsh food webs

An increasingly used tool for food web studies is stable isotope analysis. Primary producers have a carbon isotopic signature (13C/12C) that relates to how they produce their energy through photosynthesis. This signature varies little as other organisms ingest the primary producer and the nutrients from that plant moves through the food web. The direct incorporation of primary producer’s carbon-isotope ratio into consumers’ tissues allows researchers to trace back to the source of what consumers are eating.

When used together, nitrogen and carbon isotope signatures can reveal patterns of energy flow and trophic linkages. In this study, stable isotope analysis was performed on the primary producer, Spartina, benthic sediment, fish, and crustaceans collected from each marsh.

To analyze their data, the authors tested for differences in Spartina  density, and macrofaunal communities between restored and reference marshes. With the stable isotope data, the authors estimated the contributions of Spartina, sediment organic matter, and algae associated with Spartina to the diets of consumers.

Results: How does a restored marsh compare with a natural, reference marsh?

Spartina density and biomass were overall similar between the restored and natural marshes, demonstrating recovery of an important marsh plant within four years of marsh construction. However, sediment characteristics, as measured in benthic sediments, differed substantially between marshes. In the restored marsh, sediment organic carbon, nitrogen, and detritus content was much lower relative to the natural marsh. Densities, biomass, and species richness of macrofauna were very similar in the two marshes, and sometimes higher, in the restored marsh.

The 13C values of sediment samples in the restored marsh indicated that  recently deposited Spartina contributed substantially to sediment detritus.  In contrast, sediments of the natural marsh had a 13C signature that indicated detritus had a longer period of time to accumulate.

Consumer 13C values in both marshes were in a similar range that suggested consumer diets in these habitats were supported by a wide range of resources including Spartina, detritus, sediment organic matter, and benthic microalgae.

While overall, crustacean and fish consumers in each marsh relied on similar primary producer sources, the authors pointed out an important difference between the restored and natural marsh food web: in the natural marsh, some generalist consumers such as the crustacean Palaemonetes had a 13C  signature that suggested these consumers heavily relied on organic matter and detritus present in the sediments.

Conclusions – Is marsh restoration worth its salt? 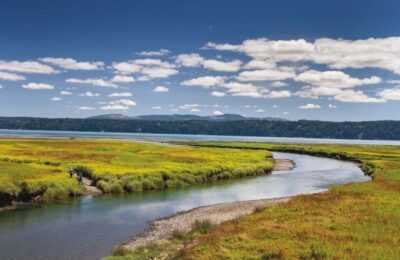