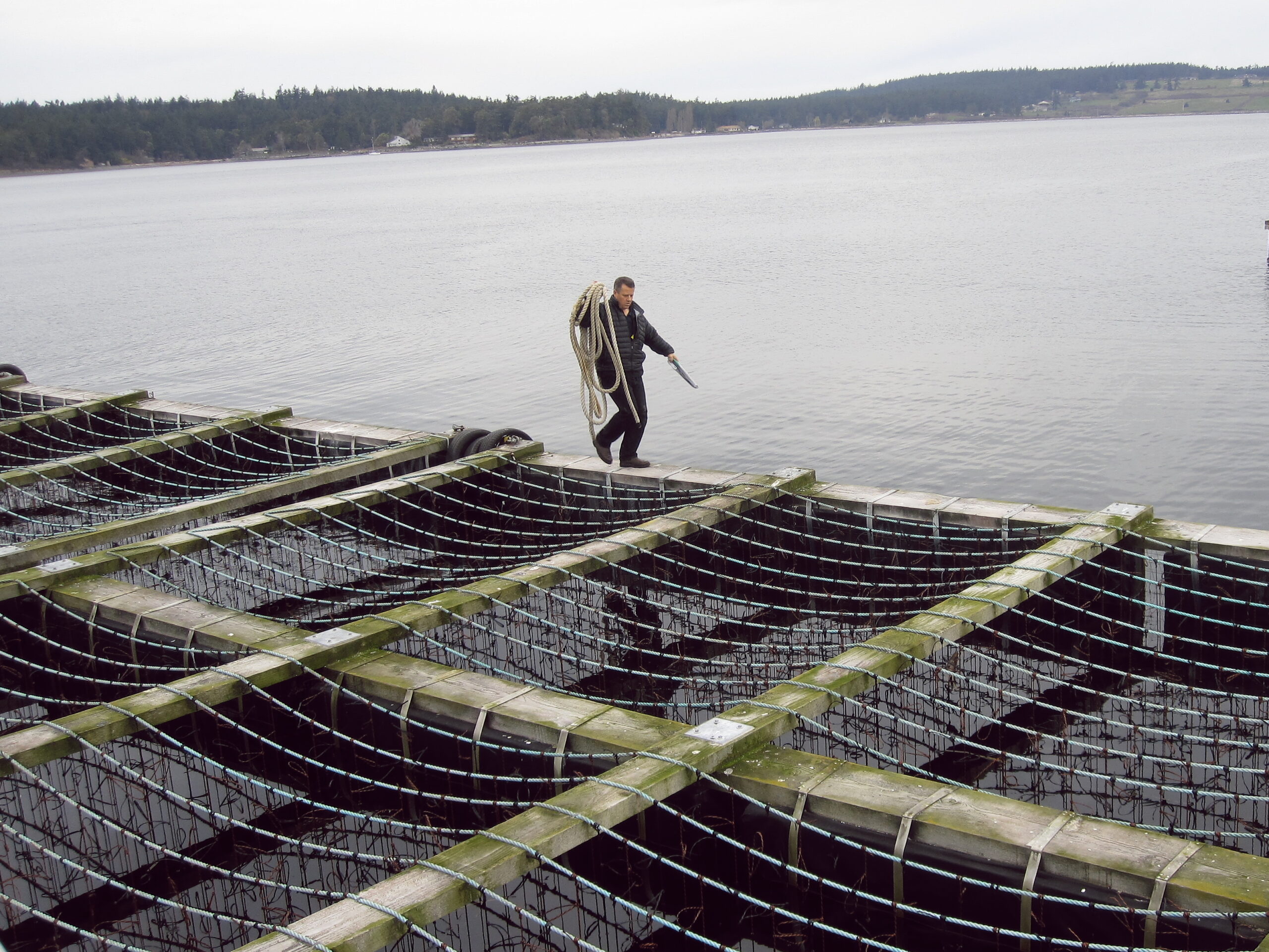 A growing space for US aquaculture

Aquaculture has a long history in the US. In fact, aquaculture here traces back to before the US was even a nation. In what’s now Washington State, for example, there’s evidence that indigenous groups tended coastal clam gardens as early as 1500 BCE.

Today, marine aquaculture is practiced in a variety of ways across the country— everything from mixed kelp-mussel cultures in the Northeast, to shrimp farms on the Gulf Coast, to trout and salmon production in the Northwest.

Despite all that production within the country, the US still imports most of the seafood consumed here. In fact, seafood from domestic marine aquaculture makes up less than 1% of all the seafood consumed in the US. Proponents of aquaculture see a glowing opportunity for expansion in those numbers. By increasing domestic aquaculture, they argue, we can grow an industry that’s beneficial for US seafood producers and consumers alike.

In a recent paper, a team of scholars dig into that promise, and take a closer look at how aquaculture can help coastal communities.

Aquaculture and the promise of a blue economy

Those who support increasing local aquaculture production often frame it as a pathway to a blue economy, or an economy centered on livelihoods tied to the sea. Blue economies promise three things: economic growth, stable livelihoods, and sustained ocean health.

The potential benefits of blue economies have driven governments and private investors to fuel the aquaculture industry’s expansion. As a result, the number of aquaculture operations, jobs, and overall production have significantly grown over the past decade. Funding for aquaculture research and development has also increased. Governments are planning for future increases, too—  more states are setting aside nearshore spaces specifically for tomorrow’s sea farms.

In theory, that investment will lead to economic growth on a broad scale. Indeed, the impact of the blue economy is already sizable— in 2018, according to NOAA estimates, the blue economy was responsible for $373 billion of the nation’s GDP.  Eventually, blue economy proponents argue, these broadscale benefits will trickle out into coastal communities, leading to increased jobs, improved coastal infrastructure, and economic revitalization.

Sounds pretty good, right? But in their article, authors argue that we might be painting the benefits of the blue economy with too broad a brush.

The thing is: communities won’t all be alike in how they respond to increasing aquaculture. That means a one-size-fits-all approach to growing aquaculture for the blue economy might not be beneficial everywhere. While broadscale impacts like increased seafood production and GDP contributions are beneficial, it’s also crucial to examine how aquaculture plays out on a community-by-community basis.

Some communities experience a lot of conflict as aquaculture increases. Different perspectives on how to use ocean space can clash if aquaculture operations overlap with areas that are already being used for fishing, recreation, or other uses. Sometimes, these conflicts reflect deep questions about community values, compromise, and decision-making.

Plus, the economic benefits of aquaculture production don’t always flow back to the communities engaged in aquaculture. Not all aquaculture production is created equal. Large multinational corporations are responsible for a decent chunk of the US’s seafood production; Sometimes, the profits accrued by these corporations don’t make it back to the communities where production is occurring. In other cases, some community members benefit financially from leasing property or finding employment in aquaculture, while other community members are left bearing the burdens without any of the benefits.

Because the impact of increased aquaculture depends so much on the existing economic and political, and cultural context of a community, authors note, we need a more nuanced view than the broadscale benefits of blue economies. Instead, the focus should be on blue communities.

Blue communities are like blue economies in some ways— both ideas emphasize the important role of the ocean in sustaining livelihoods. But the idea of blue communities puts the community, not the economy, at the center. Rather than measuring success purely in terms of economic growth, blue communities focuses on wellbeing. Community wellbeing in a multifaceted idea, and it includes everything from environmental health, to food security, to an ability to participate in government, to maintenance of strong relationships between community members. Economic growth is part of wellbeing, but it’s just one factor out of may.

The idea of blue communities also differs from blue economies because it operates on a community-by-community basis. It acknowledges that every community is different and starts with a unique social, political, and environmental context.

So what does that mean for aquaculture?

Aquaculture has a role to play in blue communities— but that role will look different depending on the community in question. Authors note that, by paying attention to those place-based differences, we can help support blue communities as aquaculture continues to grow.

A central piece of this is ensuring that communities get a say in the aquaculture industry’s development. By really engaging with people on the community-scale, the growth of aquaculture can match the community’s values and wishes.

For example, communities can decide how much of their ocean space to dedicate to aquaculture, compared to other uses. They can set limits on engaging with multinational corporations and support more alternative aquaculture production set-ups like owner-operated farms or seafood cooperatives.

Blue community aquaculture opens the door to production that delivers more than just economic growth. When they’re designed to support wellbeing, sea farms can become neighborhood gathering places, places where people in recovery can learn new skills, places where shellfish are used as food and as water quality improvers, places where farm-raised products can support, not compete, with wild harvest.