‘Development and habitat destruction aren’t a huge deal; you can just restore those areas or create habitats elsewhere, right?’

This is kind of like saying you don’t need to reduce your use of or re-use plastic bottles if you recycle them. The actual harvest of the resources to make plastic bottles comes at a cost, so you should prioritize Reducing and then Reusing over Recycling. Similarly, if our goal is to reduce human impacts to the environment, we should really prioritize conserving and protecting habitats. Then, if necessary or if damage has already been done, restore them. Let’s talk about a concrete example: a seagrass meadow (Fig. 1).

Seagrass is an incredibly important ecosystem. It plays many different roles, including oxygen production, buffering coastlines from wave and storm impacts, providing habitat for a biodiverse community (including commercially and recreationally important species), and as a carbon sink!

Blue Carbon and the Seagrass Sink

You may have heard of ‘blue carbon’. Blue carbon refers to organic carbon stored in marine habitats (like mangroves, saltmarshes, and seagrasses). Here’s a great 2 min video on blue carbon! Stored carbon is basically retired. It’s been taken out of its daily grind: the carbon cycle (Fig. 2). Seagrasses bury carbon 35 times faster than tropical rainforests, and they can store that carbon below ground for millennia! Essentially, once buried by seagrass, that carbon is retired from the carbon cycle. Unless of course, somebody (*cough “humans”*) digs it back up. If that buried carbon is released back into the atmosphere, it will contribute to global warming—carbon’s way of getting back at us for pulling it out of retirement, I guess.

This general process has been shown for terrestrial forests, permafrost, and peatlands. When those systems are disturbed (through harvest, digging into the soil, etc.), the rate of carbon loss is much higher than the rate at which it is accumulated. In marine environments, disturbing saltmarshes and mangroves results in release of stored carbon, but such a phenomenon has not been described for seagrass (until now?).

Macreadie et al. used a large-scale disturbance site: a 1960s seismic testing site for a nuclear facility. This testing created 11 large circular holes in Posidonia australis meadows in Jervis Bay (east coast of New South Wales, Australia). These holes are slowly recovering as seagrass encroaches back into the bare sand. They are not expected to have fully recovered until 2034 at the earliest or 2071 at the latest.

With a goal of determining the impact disturbance has on that blue carbon, called soil organic carbon (SOC), in these seagrass meadows, the scientists needed to answer some questions:

1) Is there less SOC in disturbed areas?

2) Is the rate of SOC loss greater than that of accumulation there?

3) Does the disturbance change the abundance or community composition of bacteria?

That last question is important because bacteria are responsible for breaking down and thereby storing the carbon, but vary in their efficiency to do so.

Many methods were utilized to answer these questions, as is usually the case in science. In 2013, soil samples were collected from disturbed (still devoid of seagrass), recovered (recolonized by seagrass within the past 5-10 years), and undisturbed (not affected by the seismic sampling) areas of the seagrass meadows. To determine when recovery has occurred, aerial photos of the original holes, calculated recovery rates, and Google Earth imagery from 2004-2013 were used. (Scientists use what they can to find their answers!). Cores were taken for radiocarbon dating, geochemical, and bacterial analyses. Lots of machines, programs with fancy names, and statistical analyses were used.

What are the Answers?

2) Disturbed soils had more negative 13C values than undisturbed. That is, they had less plant-derived carbon. Based on calculated rates of soil accumulation rates and a geophysical reconstruction of long core ages, it seems the top 90-100 cm were disturbed by seismic testing. That depth accounts for the storage of the past 6000 years of carbon! The analyses for this study only looked at the top 30 cm, so 1300-3000 years.

3) Bacterial abundance did not differ between disturbance levels, but community composition did. There were more aerobic heterotrophs in disturbed areas, indicating a more oxic (or oxygen-rich) condition, whereas anaerobic and sulfate-reducing bacteria thrived in undisturbed areas. Disturbed areas, rid of seagrass, have soils that are less stable—more easily stirred up and eroded—, resulting in greater oxygenation, fostering a different bacterial community. Recovered areas showed a community in between those extremes, so one likely shifting from a disturbed to an undisturbed state.

While the authors caution readers about generalizing this study (due to the specific nature of the disturbance), they did discover some very interesting new information! They demonstrated that disturbance does have an impact on SOC stored in seagrass meadows, releasing carbon that had been retired thousands of years ago. And obviously the disturbance is still having an impact even after 55 years since it hasn’t fully recovered yet. Therefore, for carbon storage, and many other reasons, protecting seagrass habitat is of great importance!

There is a silver lining in this study. Recovery can lead to burial of SOC again, about half of the carbon lost was recovered within 5-10 years. Transplanting seagrass to restore the habitat could help speed that recovery. Such restoration could help offset carbon emissions in our fight against climate change.

Keep the retired carbon in retirement! Not only does destroying part of a seagrass bed interfere with wave buffering and habitat for fish and other organisms, but it releases stored carbon into the atmosphere, increasing its heat trapping capacity. In light of climate change and our new global climate accord, we should consider blue carbon protection and restoration initiatives. Just Remember This: Conserve and Protect. Then Restore.

What can you/we do to protect blue carbon’s retirement? Share your ideas in the comments! 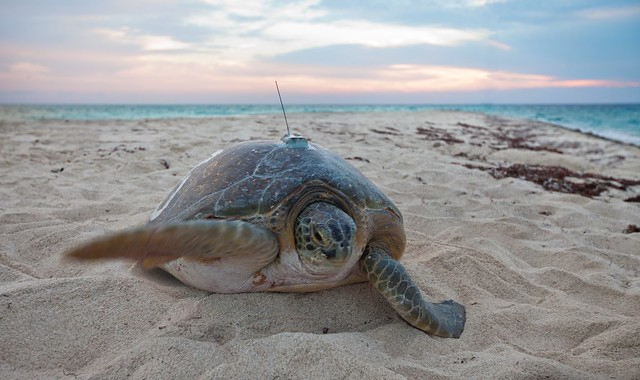 2 thoughts on “Seagrass, Disturbance, and the Blue Carbon Cycle”