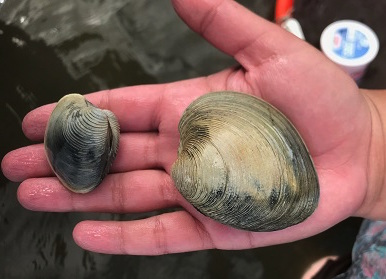 “This summer, I got the wonderful opportunity to be a summer intern (SURFO) at the University of Rhode Island Graduate School of Oceanography! My SURFO advisors were Dr. Kelton McMahon and Dr. Roxanne Beinart, and I also worked closely with my graduate student mentor, Nina Santos. My undergraduate research experience this summer at URI has been amazing, and I have been studying fascinating aspects of Rhode Island’s coasts! This fall, I enter my junior year at the University of Rochester in Rochester, NY, where I am majoring in environmental science and minoring in sustainability. I use she/her pronouns, and you can find me on Twitter @science_sommer.”

Organisms have evolved in many intricate ways, each different from the last. For example, awning clams and quahogs are both species of clams that live in Rhode Island salt ponds, but there are far reaching differences between them that could not be guessed after looking at all their similarities. Awning clams and quahogs feed in vastly different ways, which may prove to have a large impact on the cycling of chemicals and compounds throughout their bodies and throughout their respective food webs.

Photosynthesis and the alternative chemosynthesis 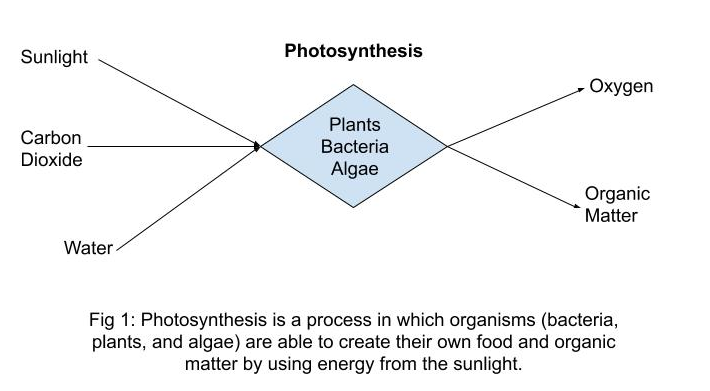 Photosynthesis (Fig 1) is the process of harnessing energy from the sunlight to create organic matter. It is widely studied, and many consider it to be the main way that organic matter is created in the earth’s ecosystems. However, there is also the process of chemosynthesis, which is far less understood but no less important.

During chemosynthesis (Fig 2), organisms are able to initiate specific chemical reactions that harness energy to create organic matter – similar to photosynthesis except without the energy from sunlight! In this way, chemosynthesis is a vital process in areas that do not receive sufficient sunlight, such as in the deep-sea ecosystems in which chemosynthesis was first discovered.

Lucky for us, however, chemosynthesis has also been discovered as a valuable process in ecosystems everywhere, including here in Rhode Island. This allows us to study intricate and important ecosystems that do not rely on photosynthesis for the creation of organic matter – without having to go far.

How does chemosynthesis relate to other organisms and their ecosystem? 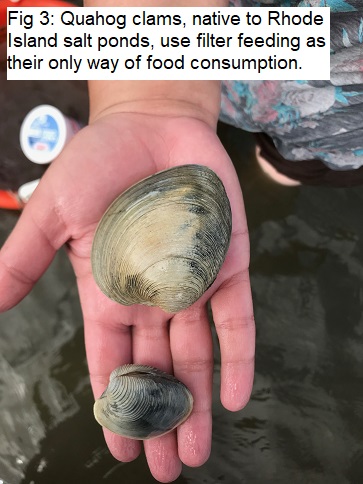 Many well-known types of clams eat only plankton, such as the staple-of-Rhode-Island quahog. Quahogs (Fig 3) do so by filter feeding, in which they take in water, filter out any edible material such as phytoplankton and zooplankton, and then spit the empty filtered water back into its surroundings. 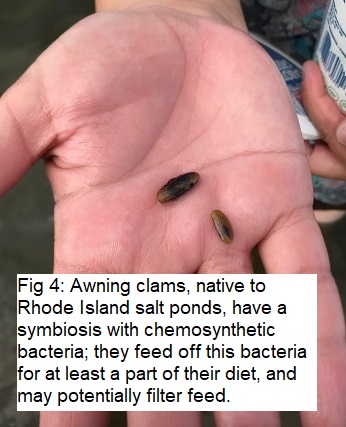 How can we take a closer look at the clams?

To be able to analyze the diets of the quahogs and awning clams, we will be using isotope analysis. An isotope is an atom of an element that has a different number of neutrons. Therefore, although they are all the same element, isotopes can leave slightly different signatures when run through chemical and physical analyses (Fig 5). Therefore, if we run tissue samples from both quahogs (a known filter feeder) and awning clams (a known symbiont feeder and potential filter feeder), we may be able to trace back the sources of the chemicals in the tissue. This will help us understand what the awning clam is feeding on and how organic matter is cycled throughout the clam and its ecosystem. 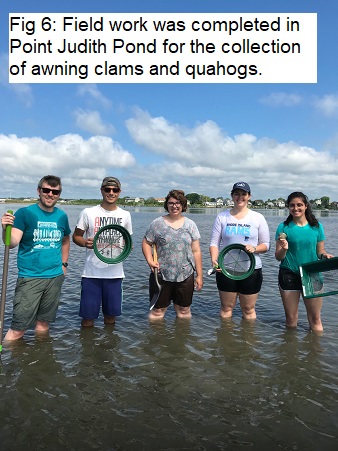 To do this, we first completed field work (Fig 6) in the salt ponds, where we collected quahogs and awning clams. We first went out to Quonochontaug Pond with the Rhode Island Department of Environmental Management, and later to Point Judith Pond with some fellow labmates. Next, we dissected each clam (Fig 7), to separate the gills, foot muscles, and shells of the clams, as those are the three parts on which we will be running isotope analysis. After grinding up the samples in a mortar and pestle (to get it into a fine powder), we ran the samples through a mass spectrometer, an instrument that measures isotope data. This data will be only a series of numbers, and so we will have to do some in-depth data analysis to decipher what the isotope values mean in terms of the awning clam’s feeding and cycling. 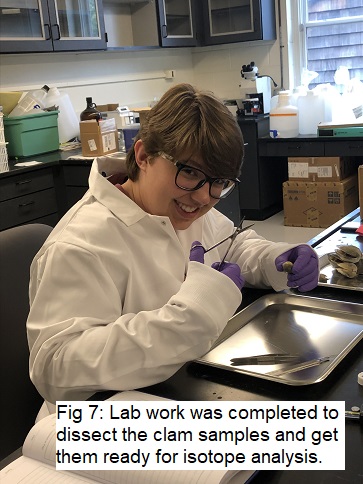 The implications isotope analysis on awning clams and quahogs

With this work, we will hopefully be able to trace chemicals and organic matter as they cycle through ecosystems, which may provide another window into the complex systems found in our oceans. The kind of chemosynthetic symbiosis that the awning clam has evolved is being discovered in many new and unexpected places and understanding how it works may provide us with crucial information to the stability and longevity of our earth’s ecosystems.