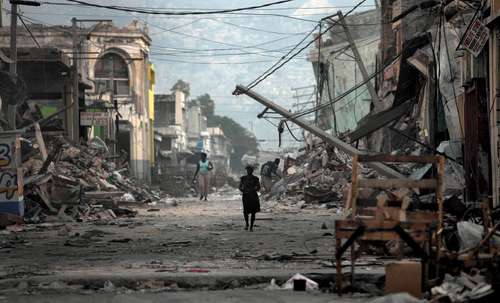 This post was written by Kamal James. Kamal was a summer intern (SURFO) at the University of Rhode Island Graduate School of Oceanography working with Dr. Marie Helene-Cormier to analyze seismic reflection (aka CHIRP) data from a fault system involved in the 2010 earthquake in Haiti. He is a graduating senior in Earth Science from Lehman College in the Bronx, New York.

“What does a lake have to do with oceanography?”

Haiti – a country positioned at the Caribbean and North American plate boundary – is no stranger to seismic activity. In January 2010, the poorest country in the Western Hemisphere experienced the fifth most catastrophic earthquake in the world. The magnitude 7.0 earthquake that shook Haiti in 2010 resulted in around 250,000 deaths and 1.3 million people displaced in and around the capital of Port-au-Prince.

Unlike the highly tectonic regions of California and Japan, Haiti’s infrastructure is not seismically retrofitted to withstand earthquakes such as these. Unfortunately, the socioeconomic conditions in the country prior to the earthquake and lack of sufficient building codes contributed to the magnitude of the resulting humanitarian crisis. Considering the percentage of Haiti’s population that was killed or severely impacted, the quake could be considered the most destructive event any country has experienced.

In a region with a long recorded history of quakes – the earliest documented in 1562 – it is only a matter of time until the island of Hispaniola is due for another potential disaster. GPS stations positioned along the Enriquillo fault zone document a combination of compressive (smushing) and strike-slip (scraping) motion across the region at a rate of 1.1 centimeters per year (cm/yr).

Thanks to this GPS data, I’ve been able to validate some of my findings this summer. While it is difficult to forecast earthquakes, it is possible to predict the risk in the event that one occurs. Using some math, I was able to calculate the extent of movement for the imminent and overdue earthquake expected in Eastern Haiti.

1.1cm/yr doesn’t seem like much until you account for the lack of a quake in the region for nearly three centuries. The last earthquake to rupture along this fault zone was 270 years ago in 1751 – and since I know that converging motion is about 1.1cm/yr, I simply multiplied the number of years by the relative motion (270 years x 1.1cm/yr = ~ 3 meters). This is called a slip-deficit – or the amount of motion that has yet to be released – which is about 10 feet! Forecasting this earthquake is no easy feat, but with the use of unlikely survey methods and a lake, we can help identify and mitigate associated risks.

Now, I know what you’re thinking; what does a lake have to do with oceanography? The answer may lie beneath the lake bed – but not without the help of oceanographic survey methods.

Lake Azuei, known locally as “Etang Saumatre,” is the largest lake in Haiti, and conveniently nestled within this seismically complex region. Located about 60 kilometers (km) east of the 2010 earthquake epicenter and about 30 km east of the densely-populated capital Port-au-Prince, its proximity to the Enriquillo fault zone may reveal crucial morphological features beneath.

Studies since the 2010 earthquake reveal that there’s deformation around this fault zone. Unlike on land, tectonic deformation is well-recorded in lake sediments where deposition is more continuous. Acquiring subsurface seismic profiles on land is logistically difficult since it’s hard to imagine asking someone to use their backyard to deploy clunky machinery. Not to mention, terrestrial features like folds, faults, and hills are subject to erosion, effectively removing pieces of the puzzle we’re trying to solve.

Use of lakes offer advantages over oceans as well. Their ease of access and well defined basins facilitate great stratigraphic correlations. Compared to the ocean, lakes are relatively shallow, which allows surveys to be carried out using lightweight geophysical equipment deployed from small boats. In short, investigations within lakes can be cheaper and less laborious.

The structure and morphology of features below Lake Azuei are poorly understood. To improve our understanding of plate motion and deformation within the Enriquillo fault zone, scientists embarked on a seismic survey in 2017 (a method typically used in marine investigations). Using a boat and CHIRP sonar, a high frequency sound wave was transmitted below to the lakebed and reflected back to hydrophones towed along the boat. Not only does this device profile the lakebed, but also the geologic structures beneath the lake bed. This information was visualized in real-time during the survey, but remained to be analyzed by yours truly. One of my tasks this summer was to process, analyze, and interpret 400 km of CHIRP data from the 2017 field excursions, and an earlier excursion from 2013.

After analyzing and interpreting the CHIRP data files, these morphological features will be mapped using software called GMT (Generic Mapping Tools). I’ll be generating some useful maps throughout the fall to be presented at AGU 19’. Stay tuned and check out www.projectlakeazuei.org!