Shipwrecks bring to mind haunting images – vessels of human civilization, scuttled away in various states of ruin.  Their histories and ghastly appearances are intriguing, sometimes eerie, windows into the past. We can learn a lot by examining these relics and their former lives before defeat – but sometimes, there is more to the story. Sometimes the fallen ship is reborn and continues to live on below the waves.

The aircraft carrier USS Independence (CVL 22; known as the “Mighty-I”) joined the United States’ WWII Pacific Fleet in 1943.  She raided Japanese installations, provided night air patrols and reconnaissance flights, and even suffered torpedo damage from attacks. After the war, the Independence continued to serve as a key part of America’s first atomic bomb tests, known as “Operation Crossroads.” For the first, test “Able”, the vessel was placed 560 m away from the blast zone. Although badly damaged, Independence was used in a second, underwater atomic bomb detonation (test “Baker”) where she was placed about 1390 m away from the detonation.

Independence was decommissioned in 1946 and towed back to San Francisco where she served as a training vessel for military personnel learning how to respond to the effects of atomic bombings on ships. After three years of service as a training vessel, the radiation levels aboard the Independence had diminished to undetectable levels.

By this time the Cold War was upon us and fear of espionage required Independence to serve in one last mission – a weapons trial.  On January 26, 1951, Independence was loaded up with low level radioactive waste (such as gloves used in tests at radioactive labs) and taken out to sea. Two torpedo warheads were placed inside the vessel and detonated remotely, intentionally scuttling USS Independence off the coast of San Francisco in 2,600 feet of water.

The “Mighty-I” lay dormant in its watery grave for decades – no one had seen the vessel or knew exactly where she had landed on the seabed. But due to her nuclear past, Independence was the center of rumors. There were fears that the 622 foot long steel aircraft carrier was still highly irradiated from its time in the atomic bomb trials, damaging the environment, and posing a threat to nearby San Francisco. While the rumors seemed scientifically unsound, they could not be dispelled until Independence was located and examined.

In 2009, the NOAA ship Okeanos Explorer conducted a sonar survey of the Independence sinking site, following up on an earlier U.S. Geological Survey sonar mapping. The final resting point of the “Mighty-I” was located several thousand feet below the waves. Six years later, NOAA went back to the site of the wreck to get a closer look at Independence. The Autonomous Underwater Vehicle (AUV) Echo Ranger conducted a detailed, 3-D sonar mapping of the sunken vessel. This was the first “sighting” of USS Independence since its sinking in 1951.

After being deployed in two atomic bomb trials, an intentional scuttling, and sitting in the deep ocean waters for over 60 years, Independence was still sitting upright on the seabed in relatively good condition. Yet, this sonar mapping did not provide actual images of the vessel – and many questions remained about the condition of the wreck and the surrounding environment.  In 2016, NOAA and the Corps of Exploration returned to the wreck site and using the Exploration Vessel Nautilus and two Remotely Operated Vehicles (ROVs), Argus and Hercules, were able to conduct a detailed, visual survey of the wreck site. What they found was incredible.

A New Life for the “Mighty-I”

After sitting on the ocean floor for 65 years, Independence was found to have been literally “reborn”. The steel hull was remarkably intact with obvious signs of damage from both the atomic bomb and damage incurred during the sinking. Yet, there was something beautiful about the once austere aircraft carrier: giant, ornate sponges had grown over much of Independence. Varying sizes, shapes, and colors decorated the side of the ship – some as large as the openings for the doors they were growing next to. Fish and crabs had made Independence their new home as well, creating a small ecosystem inside and around the wreck. After living many years fighting in battles and serving our country, Independence had been reborn at the bottom of the ocean as a home for ornate ocean animals.

This rebirth and transformation wasn’t the only exciting discovery. When Independence was scuttled, all aircraft formerly placed on the vessel for atomic testing were reportedly removed. Yet, the AUV sonar mapping had revealed some ambiguity. When Hercules finally examined the wreck, it was apparent that there were some exciting stowaways. A mostly intact Grumman Hellcat sat in the elevator hatch and a Curtis Helldiver was found on deck. The second served as an eerie reminder of the “Mighty-I’s” atomic past. In place of the characteristic US Navy emblem (a white star in a blue circle) on the wing, only a white circle remained. This aircraft likely sat on deck during the atomic bomb trials – scorching off the blue paint of the symbol and leaving only the underlying white paint.

What about the radioactivity?

After spending so long in San Francisco prior to being sunk, the majority of the radioactive isotopes had been depleted. Additionally, water serves as a fantastic insulator that in effect, shields the environment from what low-level radiation might remain. Just to be safe, the Rad Lab and UC Berkeley tested the AUV Echo Ranger for traces of radiation after the initial survey of the Independence in 2015, and ROVs Hercules and Argus after the 2016 expedition. In both cases the AUV and ROVs were clean – there was no lingering radiation to contaminate the vehicles. While exploring the wreck, scientists did find a remnant of the nuclear waste that had been sunk inside Independence. The concrete drum served as proof that the military had correctly disposed of the radioactive material as reported, further diminishing chances of radioactive contamination.

As for the surrounding environment: the sponges on Independence were large – but not abnormally so. Their size was more likely due to the protection the large steel ship provided from the damages of fishing nets rather than an artifact of any radiation. To better understand just how the radioactive isotopes may have impacted the animals on the wreck, several sponges were collected from the wreck and brought to the surface to be further analyzed by the Rad Lab. The full results are not out yet, but the initial scan reported that the sponges, as expected, were not radioactive.

The “Mighty-I” serves as an important reminder of WWII and the atomic past of the Cold War. Independence was home to many brave men who served our country during these tumultuous times. Her rediscovery is important historically and proves that this wartime relic has an important new life: serving as a sanctuary to deep-sea animals.

You can watch highlights from the exploration of the USS Independence at nautiluslive.org

For more information on the radiation and USS Independence visit: http://newscenter.lbl.gov/2015/07/07/radiation-safety-for-sunken-ship-archaeology/

For further reading on the history of the USS Independence visit: 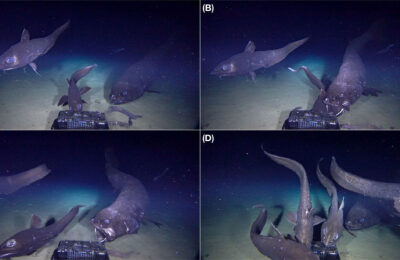 One thought on “The Rebirth of the “Mighty-I””