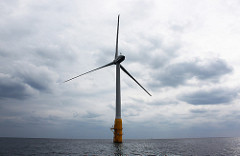 Would you be willing to take a survey?

On a leisurely Saturday afternoon you decide to go for a walk downtown to enjoy the sunny weather. Someone with a clipboard stops you at the corner and asks if you have time for a survey. After you agree, he hands you an eight-page survey and you learn he is a graduate student gathering local opinions on an upcoming offshore renewable energy project. As you skim the survey, you see some basic questions (age, gender, etc) as well as some surprises including one on whether you’d describe the ocean as “a place of inspiration” or “a source of food”. You fill in your answers, hand back the survey, and make your way to the ice cream shop around the corner.

The above scenario is exactly what happened (well, maybe not the ice cream part) in the summer of 2015 on Block Island, Rhode Island. A project to construct an offshore wind farm off the coast of Block Island was begun in 2015. Its operation was approved after an extensive study period, completed in 2010, of appropriate site locations that would minimize effects on wildlife, the seafloor, tourism, commercial fisheries, and several other factors. Like any major building project, the Block Island wind farm had strong opinions on all sides. The lead researcher of this study, David Bidwell, was curious about how symbolic beliefs about the ocean influence public opinion of offshore wind farms.

Bidwell investigated how people’s core values and personality traits influenced their opinions on the wind farm by interviewing locals and tourists alike. He handed out an eight-page survey to every third adult who passed particular locations on the island, including near a public library. The survey included a series of questions to ascertain how individuals’ beliefs about the ocean shape their support for offshore wind energy.

How do people feel about the impacts of a wind farm?

In the survey, participants were asked about the impacts of the wind farm using fifteen different factors (Figure 2). If people thought the wind farm would have a positive impact, the bar is greater than zero; similarly, a perceived negative impact is less than zero. The length of the bar indicates how strongly people felt about each factor. Overall, the co

nsensus was that a wind farm would have a positive impact socioeconomically (e.g. on electricity costs and jobs) but would have a negative impact on natural resources (e.g. scenic views and ocean character). Bidwell paired these responses with questions about each survey-taker’s values using the value-belief-norms (VBN) theory.

The values-believes-norms (VBN) theory is used to analyze and understand public opinion on issues usually pertaining to the environment. The theory is as follows: people’s foundational values influence their environmental worldviews. This will in turn influence individual’s behavior (such as how they vote on an environmental policy). An individual’s values are assessed with four main measurable traits: egoism (worried mostly about yourself and your family), altruism (worried about people you aren’t related to), biospherism (worried about critters, not people), and traditionalism (well-summarized by the phrase “if it ain’t broke, don’t fix it”).

Changing approach in the future

Bidwell found that perceived impacts are the strongest predictor of whether or not a wind farm will be supported. Beyond the expected beliefs about the socioeconomics of a wind farm, people’s perspective on the role of the ocean influenced their support of the Block Island wind farm. Does this mean that people that characterized by egoism and traditionalism are never going to support renewable energy sources in their neighborhood? Not necessarily. This study, and land based ones like it, is important in figuring out how to best approach all types of people about prospective projects to adequately address their concerns. People who oppose local projects may be more concerned with maintaining the “status quo” than with improving the quality of the local environmental, which is usually of the primary issues addressed before a project.

A final note, commonly in renewable energy literature people who support wind energy are described as understanding the benefits of renewable energy. However, People who are opposed to these projects are treated as ignorant. Bidwell’s work highlights that this may not be the case and isn’t a fair assessment. He suggests that dialogue-based approaches to planning projects should be implemented in the future. This study demonstrated the importance of openly discussing a communities’ symbolic value of the ocean before starting construction. This may help alleviate some of the concerns of people who have a value framework that inclines them to traditionally oppose these offshore projects.