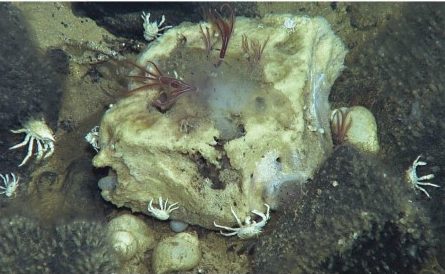 Deep down in the Atlantic Ocean, in the pitch darkness of the ocean floor, creatures of the deep are feasting. A whale had died up above; its sinking carcass made its way past the sunny surface waters, the dim twilight zone where sunlight doesn’t reach, and the perpetually dark midnight zone, to finally settle on the ocean floor. Here, far below the surface, under the crushing pressure of the miles of water above, the carcass is now food.

The harsh environment of the ten to twenty thousand feet deep, is home to many species. Most of them feed exclusively off the sunken dead bodies from above. When crabs, mollusks, and deep-water sharks are done devouring the soft tissues of muscle and fat, all that’s left is the skeleton. But even those bare bones don’t go to waste.

Osedax, or “bone devourers” in Latin, are the last ones to arrive to the feast. These worms, also called zombie worms, colonize and consume the leftover bones. Osedax have no teeth, so instead they rely on a rather unconventional method to procure their meals.

These worms have forged an alliance with a variety of bacteria. These bacteria live in the worm roots – extensions on the surface of Osedax bodies. The worms use their roots to penetrate the bones, the root bacteria feed on the bones, and then the host Osedax feeds on the bacteria.

But neither the bacteria nor the worms have teeth, so how do they get into the hard bone matter? They rely on their Osedax partners-in-crime.

By breathing underwater, the worms create carbon dioxide, which they convert to acid. They then use their root extensions to inject the acid in the bones and soften them up, clearing the path for the bone-eating bacteria.

The Osedax genus was discovered quite recently in 2004, and since then, only 25 species have been described. And now, the 26th species has been discovered on the bottom of the Atlantic Ocean off the Brazilian coast.

A collaboration of Japanese and Brazilian scientists, led by Yoshihiro Fujiwara of Japan Agency for Marine-Earth Science and Technology, took a dive to São Paulo Ridge where, as they knew from a previous expedition, a sunken whale carcass lay 4204 meters deep. The scientists found that the dead whale had been largely reduced to seven vertebrae, of which two, visibly much more degraded, were colonized by Osedax worms. This was the first time that these worms were found so deep in the ocean.

The research team used robotic arms to bring the colonized vertebrate on board of their submersible vessel. The scientists then retrieved and preserved 21 worms from the bones, aptly naming them Osedax braziliensis.

Once back in the lab, the researchers examined their new worm specimens to see how they compared to the other 25 known Osedax species. They found similarities to O. frankpressi, which was one of the first two species discovered. Like in O. frankpressi, O. braziliensis males and females are very different, and only female worms can inject acid into whale bones.

Osedax braziliensis are tiny, only about 20 mm long, but the males of the species are even smaller. The tube-like males lack the characteristic roots and palps and inhabit the gelatinous tubes of their breadwinning females. Despite their similarities, this newly discovered species can be distinguished from O. frankpressi by a yellow bump behind their first body segment. O. braziliensis worms are also smaller.

This 26th species adds to the variety of known Osedax worms all over the world. From shallow Swedish waters to the Mediterranean Sea to the freezing depths of the Antarctic Ocean, bone-drilling zombie worms chew away at whale skeletons. In the harshness of the ocean floor, no food can go to waste.