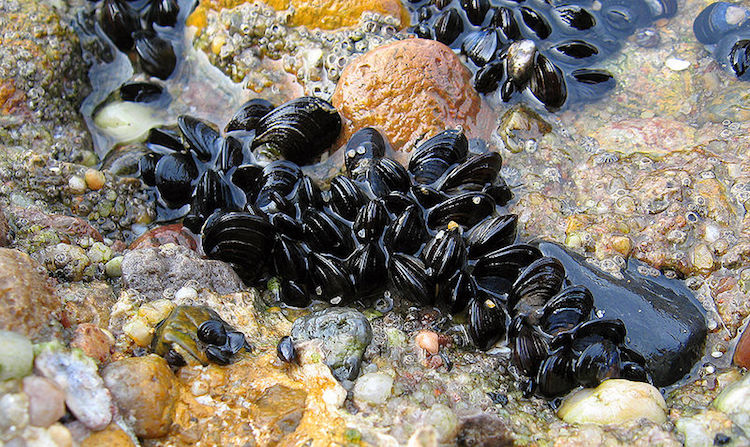 For many marine critters, gills are responsible for the gas exchange necessary for their survival – in other words, breathing. Some marine animals even have extra special gills that help them breathe and eat, all thanks (in part) to incredibly tiny, hair-like structures called cilia that beat back and forth.

Blue mussels are among those evolutionarily-endowed to both breathe and eat via gills. Cilia are located on comb-like structures inside the gills, called filaments. There, they push and pull water and food over the gills. The filter-feeding blue mussel has three types of tiny hairs. Lateral cilia are responsible for creating movement in water that facilitates gas exchange, food capture, and removing waste. Frontal and latero-frontal cilia are in charge of moving minuscule particles along the gills that the mussel will either choose to eat or spit out.

So how do these gill hairs and the behaviors that they’re responsible for fare under the pressure of increased dissolved carbon dioxide (pCO2), and consequent ocean acidification, caused by climate change?

Shannon L. Meseck and her research team explore this question through field and lab experimentation.

The scientists gathered 40 blue mussels for a field experiment and 30 for a lab experiment in Milford, CT. In the field, Meseck et al. (2020) collected data on pCO2, seawater pH, and mussel filtration and feeding behavior. While the seawater in Milford naturally experienced fluctuations of pCO2 throughout the day, Meseck and her team exposed the mussels in the lab to two different levels of carbon dioxide to compare behaviors.

In the field, as pCO2 increased, so did the seawater’s acidity. With this change in acidity, the scientists found significant differences in the mussels’ feeding behavior.

Mussel clearance rate, or the volume of water a mussel takes in, was 28% lower in the afternoon during high pCO2. Meseck et al. (2020) additionally noted a lowered filtration rate in the high pCO2 afternoon. Furthermore, these mussels selected and ingested particles differently between levels of pCO2. In the morning, when the pCO2 levels were low, they ate 31% more organic particles and had higher food rejection rates. The lab experiment closely echoed these findings.

When looking at the mussels’ gills, Meseck and her team discovered that higher pCO2 correlated with fewer lateral cilia beats – which makes sense given these hairs’ jobs and the altered feeding and filtration behaviors observed.

According to Meseck et al. (2020), results indicate that increased pCO2 reduces filtration and feeding rates of blue mussels as evidenced by slowed cilia beats and differences in food particle selection.

Learning from the Beat of Bivalve Cilia

The findings present the wonder of a mussel’s ability to rapidly adapt to changing environments, but also the caveat that in the future, should increased pCO2 persist, mussels’ wellbeing might be threatened. Because these marine invertebrates reside in frequently fluctuating habitats, they have a naturally-built in ability to respond to changes around them. However, we know that increased pCO2 harms mussels, such as acidic waters increasing the fragility of their calcium carbonate shells which makes them incredibly vulnerable.

Since lateral cilia are controlled by neurotransmitters, Meseck and her team suggest that further studies explore how mussel nervous systems will respond to increased pCO2 levels and consequent ocean acidification. The team also encourages further work on the production and secretion of mucus in mussel gills, which aids the physical process of eating or spitting out food particles.

We can take a cue from the beats of the blue mussel’s cilia to notice how these marine marvels adapt to climate change and ensure we study them more to protect their future.