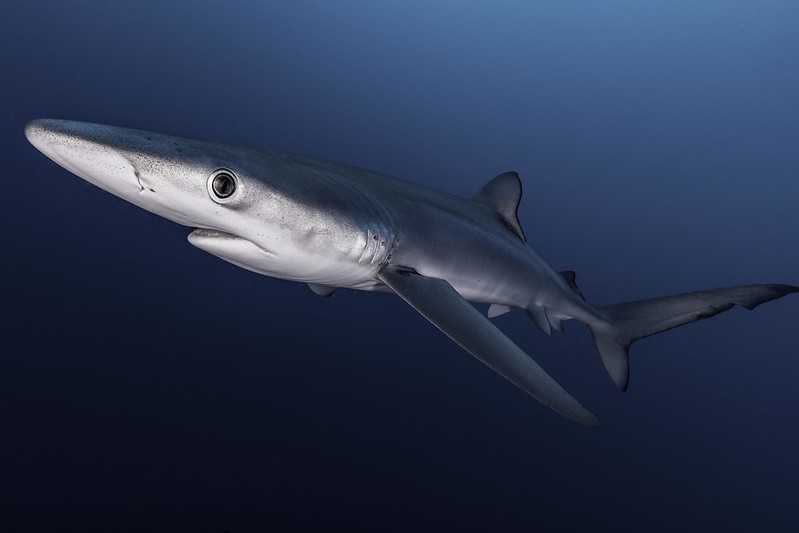 The blue shark is the most common and widely distributed shark species in the open ocean. It is also the most heavily exploited shark species in both commercial and recreational fisheries, resulting in population declines around the world. Blue sharks are highly sought after for their fins in Asia and their meat, skin, and liver oil can be found in global fish markets. Populations across the globe are mostly understood based on the number intentionally caught by fisheries or by the number accidently caught when targeting another species, referred to as bycatch.

The fisheries often report inaccurate bycatch numbers that are not representative of the true population size. Additionally, blue sharks are known to migrate large distances and can dive deeper than 1,000 m (0.62 miles) below sea level, meaning they can exist across a large area. Behaviors, such as migration patterns, mating, and foraging, and biological factors, like age, and sex, also influence population dynamics and need to be understood to effectively manage blue shark populations around the world.

The southwest Pacific is home to many blue sharks and contains ocean features that would be ideal for blue shark breeding such as inshore nursery areas where sharks can mate, and pups (juvenile sharks) can eat and grow. Yet no one had performed a fully inclusive population assessment up to this point. With this in mind, scientists from New Zealand tagged and monitored 15 blue sharks in the southwest Pacific and used the data to more clearly define when and where the sharks can be found. Satellite tags are often used to achieve a better understanding of the behaviors and distribution of large, migratory animals as they track individual animals using GPS. These tags are attached to the shark’s dorsal fin and provided data on depth, location, and time spent at each location or depth for adult males, females, and juvenile sharks. The researchers overlayed these data with sea surface temperature data to determine if shark behavior and migration were influenced by seasonal temperature changes.

Where are the sharks?

Juvenile sharks remained inshore, where they were born, to grow in sheltered waters with access to smaller prey. Juveniles also stayed separated from adult blue sharks; most likely to avoid being eaten (yikes!). As expected from other studies, males and females came together for mating and then separated. Males migrated south, while females traveled north along the coast until the next mating season. Adult male sharks moved with seasonal changes, seeking out warmer waters, and traveling further and deeper than adult females while searching for food.

In the context of fishing pressure, this study revealed that fishery data was underreporting female blue shark sightings in the study area, suggesting that fishery data cannot be the main method for monitoring blue shark populations. Effective population management means maintaining population growth, which cannot happen without adult females. Female blue sharks carry their pups for 9-12 months before giving birth, making it important to understand how many adult females are active and potentially pregnant throughout the year. This research greatly improved the understanding of blue shark behavior by observing daily shark movements over the course of a year, which helps inform fisheries managers on how to ensure sustainable fishing practices.