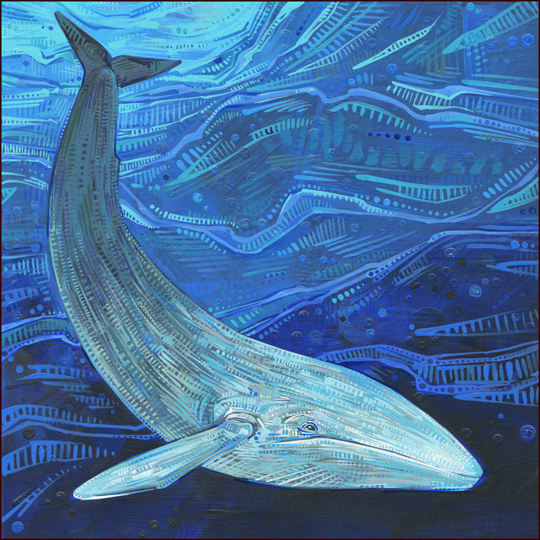 Take a moment to imagine you are in the middle of Times Square. What do you hear? Now, imagine you are in an open field in Kansas. Do these two places sound the same? Times Square is a busy tourist spot with people talking, cars honking, and emergency vehicles whirling past. In the open field, you might hear the wind moving through the grass, birds singing to each other, and maybe the sound of a distant vehicle. These two places have very different soundscapes (total sound make-up).

It would be a lot harder for you to hear your name called or have a conversation in Times Square than it would be to do so in an open field. The same principle applies in the ocean. Human activity makes the ocean noisier. From ship travel to energy exploration (oil and gas and renewable), our behavior is making the ocean louder. We humans normally wouldn’t really notice this, but marine mammals that use low-frequency communication do. Studies have shown that this increased sound hinders communication, alters behavior, and is stressful for marine mammals.

The total acoustic sound in an area can be characterized as its soundscape. A soundscape is like an audio fingerprint for a location. It is the acoustic profile for an area based on geophysical, anthropogenic, and biological sound sources (called components). The contribution of these three components to the total soundscape depends on the drivers. In the ocean, the four main drivers are ocean processes, tectonics, climate, and policies (ex. marine protected areas). Figure 1 is a schematic of how these drivers combine to become a soundscape. The elements are individual sources of sound (ex. a whale).  The multitude of elements falls under one of the three components and all combine to form the soundscape. For example, tectonics (driver) leads to earthquakes (element) which is a geophysical component that is a part of the soundscape.

Studying Sound from Pole to Pole

Researchers were curious about how the oceanic soundscape changes across the Atlantic Ocean. They collected sound data at three locations (Figure 2) in the northern, equatorial, and southern Atlantic Ocean for 16 months (2009 – 2010).

Underwater hydrophones (a microphone that amplifies sound underwater) were used to listen to the soundscape of these three areas. These sites were chosen because there are different levels of anthropogenic influence, different animals (blue and fin whales in this study), and different climates. Scientists used seismic air guns, which are used to find fossil fuels under the seabed, as a representative of anthropogenic influence since all three study sites are far from major shipping channels. Endangered blue and fin wales represented the biological component in this study as they are present at all three study sites. Finally, they used satellite data of ice coverage to represent the geophysical component since these areas are not seismically active and wind was too hard to distinguish in the measured frequency range.

Where is it the loudest?

Ascension Island (the equatorial sample site) was the loudest and had minimal seasonal variability. Both polar sites were quieter than Ascension Island and had identifiable seasonal trends. There was no ice coverage at the Fram Strait (Arctic) site. At the Bransfield Strait (Antarctic site), ice covered the hydrophone in 2009 but not 2010. This is important because ice coverage will alter the soundscape. If the area is covered in ice, it is less likely whales and ships will be nearby since it is hard for ships to travel through ice and whales’ prey that live in open water wouldn’t be near the ice. This gives a quieter soundscape compared to the Fram Strait.

Blue and fin whale vocalizations occur at different frequencies, which makes it possible for scientists to distinguish the two species of whale. Both were heard year-round at the equatorial site. There was a greater fin whale signature at the Artic site compared to blue whale signature. This was expected since the blue whale population is smaller there. Blue whales were heard more frequently than fin whales at the Antarctic site, but both were seasonal, and the trend was different between years.  This is likely due to changes in sea ice coverage. The whale vocalizations were greater in 2010, which correlated with lower sea ice coverage. This shows why longer term acoustic data sets can lead to a better “background” signal.

The anthropogenic noise was represented as seismic air guns. Seismic air guns (Figure 3) are towed behind ships and release compressed air in loud pulses that can penetrate the seafloor and send data back to the ship about what is under the sediment. This can be used for oil exploration or to map the seafloor.  Seismic air gun usage was prevalent all year round at the Equatorial site due to two factors. First, because sound is transferred more efficiently in the water than in the air, it is possible to hear signals from both poles at the equator. Second, given the constant warm climate, resource exploration (oil operations) occurs year-round in this oil-rich area. At the polar sites, on the other hand, the seismic air gun signal wasn’t as regular. The Artic site recorded the air gun signature for 10 out of the 16 months. There was minimal seismic air gun activity in the Antarctic site. Researchers predict the air gun activity was from scientific research rather than oil exploration.

At the Artic site, there was a strong seasonality to the soundscape. The greatest sound was recorded in August and September and was a combination of blue whales, fin whales, and seismic air gun noise. Compared to the Antarctic site, the Artic site was noisier all year because there was anthropogenic activity and no ice cover deterring whales from the sample site. However, the Equatorial site was consistently the loudest. It is in that “sweet spot” where sound from both hemispheres can reach and substantial resource exploration creates noise.

The ocean has its own soundscape and our activities are making the ocean louder. Research has shown that both blue and fin whales alter their vocalization pattern in response to air guns. It is the same idea as when you change how you converse in Times Square versus an open field. It is likely that the ocean will continue to get noisier and we have no solid understanding of how much climate change will impact the ocean soundscape. This study reported a baseline of the Atlantic Ocean to compare to future measurements. The next step should be to conduct a multi-year study that incorporates the inter-annual variation in biological and geophysical components.