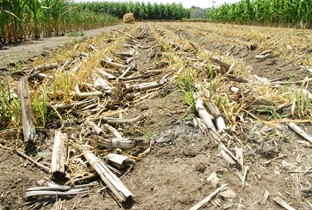 This post is part of a semester-long collaboration with Dr. Michèle LaVigne, a professor at Bowdoin College, who partnered with oceanbites authors to incorporate science communication writing into her Oceanography classes. This is a guest post co-authored by two of her Oceanography students, Dylan Atencio and Claire Beck.

For many, the idea of agriculture is inextricably entwined with technology and machines–the picture of behemoth sprinkler systems rolling slowly around a cornfield. In the United States, it is rarely a question of when, where, or how the water will come.

For farmers in central Mexico, those are the questions that define their livelihood. They must deal with the uncertainty of both the timing and source of their water. Even on most commercial farms, the landscape is not dominated by massive sprinklers but instead by simpler or smaller scale irrigation methods. For subsistence farmers–those who farm only for their family rather than sales–the crops often rely solely on the rain.

In recent years, subsistence farmers have faced some extreme climatic challenges. The region has suffered under historical drought conditions: from 2010 to 2013, the country underwent the most severe drought in almost a century. The lack of rain led to empty reservoirs in the states of Coahuila, San Luis Potosi, and Jalisco. As a result, livestock populations plummeted and crop yields were diminished (Geo-Mexico, 2013).

These are not fluke occurrences. Such drought conditions repeat almost cyclically, following in the wake of an atmospheric curiosity happening far south of these Mexican states, at the equator: El Niño.

What is the El Niño phenomenon?

In general, the equatorial Pacific Ocean follows a consistent pattern: the trade winds blow from east to west, and ocean currents follow suit. In the eastern Pacific, there is lower precipitation and colder water; in the western Pacific, the water is warm and rainfall is high. Every two to seven years, though, the region is subject to an almost unpredictable phenomenon, called an El Niño Southern Oscillation (ENSO) event. During El Niño, the winds shift dramatically and warm water masses are carried back to the east, bringing an area of high rainfall with them. This “flips” the normal conditions of the equatorial ocean and brings changes in atmospheric circulation. However, the effects of this are not limited to just the equator, as shifts in the climate are felt across the globe.

Rain-fed crops are particularly vulnerable to El Niño droughts because natural precipitation is their only water source. During El Niño years, the climate in central Mexico becomes dry, and little precipitation occurs, causing crop production to plummet. For instance, in the state of Tamaulipas, cotton crop production drops by 42%, and sorghum grain crop production drops by 77% (Adams et. al, 2002). A low crop production means a low annual income for a rural farming family, putting their social welfare and food security in jeopardy. This uncertainty of stable livelihoods occurs during every El Niño–which, according to climate data, is becoming more frequent.

Commercial farmers are often seen as the other side of the coin, as they have regular access to irrigation, which is more expensive. The high water availability makes irrigated crops more resilient to El Niño climate changes than their rain-fed counterparts. In Tamaulipas, the irrigated cotton crop production only dropped by about 2.5%, and the irrigated sorghum grain production actually had a 4% increase (Adams et. al, 2002). The consistency of these sorts of crops gives many commercial farmers a good chance at financially surviving El Niño cycles. Nevertheless, there are still regionally-specific irrigated crops that suffer under an El Niño drought, which can significantly impact a farmer’s bottom line.

Is there hope with an early warning system?

While most irrigated plants produce decent crop sizes under a drought, particular plants actually thrive in the arid climate: irrigated corn grain crop yields in Tamaulipas increase by 15%, and irrigated wheat yields in Jalisco by 17.4%. Even some rainfed grains benefit: in the State of Mexico, corn grain yields increase by 19.7%. If farmers had knowledge of an El Niño induced drought in advance, they could increase next year’s harvest by planting more arid climate crops than usual. This idea is not just a fantasy; farmers are now looking for an early warning system. Such a system would use historical climate records and future predictions to model when an El Niño year will occur, and how severe it will be.

An early warning system is taking form at Oregon State University, Texas A&M, and other institutes. Researchers have designed an economic analysis that looks at the impacts of El Niño on the agricultural output of five states in eastern Mexico. They also used a predictive model that could forecast El Niño events with incredible accuracy–and nearly a year in advance. If such a model were given to farmers, $10.7 million within the agricultural sector could be saved, and that is a conservative estimate. As the frequency of El Niño events is expected to increase, this system will become more and more relevant, and could potentially save up to $62.1 million across the country. By disseminating climate information to farmers, the Mexican government could greatly aid their people. With awareness of coming droughts, both rural and commercial farmers would be able to optimize their crop planting for the coming season and save valuable income that might otherwise amount to nothing but a field of dry stalks.

From farm to your table

Agriculture in eastern Mexico may feel like a far-off land, incapable of affecting the average US citizen’s life, but the paper trail of Mexico’s agriculture exports says otherwise. Several crops in the region are primarily responsible for the nation’s agricultural output–which in turn is primarily responsible for American imports. In 2019, Mexico exported $28 billion dollars worth of fruits, vegetables, and other food products northward. This resulted in Mexico being the United States’ number one supplier of agricultural imports in 2019. Changes in Mexico’s crop production due to El Niño have ripple effects that are felt by hundreds of millions–but hopefully, by predicting these atmospheric anomalies, those ripples will be smoothed over.