This post is part of a semester-long collaboration with Dr. Michèle LaVigne, a professor at Bowdoin College, who partnered with oceanbites authors to incorporate science communication into her Oceanography classes. This is a guest post authored by one of her Oceanography students, Sawyer Gouldman.

Increasing plastic pollution is a major issue in our oceans. A 2017 report estimates that by 2050 there could be more plastics (by weight) than fish in the oceans. Plastics make up around 80% of all marine debris. It is astonishing that what should be seaweed, logs, and other natural things are being outnumbered by plastics put there by humans. Plastic debris has been found to negatively impact over 250 marine species from turtles to seabirds to fish. A majority of the plastic in the ocean is microplastics that are not easily removed. Microplastics are generally defined as plastics smaller than 5mm in diameter. Microplastics are engineered to be tiny, commonly found in personal care products like facial scrubs and for industrial use in resin pellets. They also form from the breakdown of larger plastics such as trash bags, plastic bottles, and fishing line. To put into perspective just how many of these tiny particles reside in the ocean, a study from the National Oceanography Centre in the UK found there are approximately 21 million tons of microplastic in the top 200m of the Atlantic Ocean alone. This is equivalent in weight to half a million fully loaded 18-wheelers. With such a large volume in the ocean, microplastics easily find their way into seafood that we consume. Many studies show that they are easily ingested by marine organisms and have been discovered in products for human consumption. While scientists are still conducting studies to see how harmful microplastics are to us, it’s likely microplastics are not beneficial additions to our diet.

Plastics in Fish and Fishmeal

Before finding if the microplastics are harmful, a group of researchers from The University of Southampton UK first wanted to quantify the amount of plastic that may be in our food. They focused their attention on fishmeal, a common byproduct of commercial fishing. Humans directly consume fishmeal when it is pressed into fish oil, and indirectly when it is fed to poultry and pigs. Through a review of previous studies and analysis of new samples, microplastics were consistently present in fishmeal, and 70% of the fish sampled contained microplastics. There were significantly more plastics in fishmeal than plastics present in fish, which the researchers suggest is due to the addition of microplastics during the fishmeal production and storage process. These findings show fishmeal production is likely adding more microplastics to the environment and when used for aquaculture is creating a vicious cycle of plastic ingestion in fish. Breaking this cycle of microplastic ingestion and addition to fishmeal is key. Determining the impacts of ingestion on human health must be at the forefront of future research

The researchers wanted to see if removing microplastics was possible to mitigate the microplastic consumption in fish. To develop an efficient microplastic extraction method, the scientists filtered the fishmeal through salts such as potassium hydroxide (KOH) and sodium chloride (NaCl). This technique utilizes the different densities of saline solutions (NaCl or KOH) and water to separate the microplastics and natural fish components. The plastics are usually less dense so they float out of the solution and can then be collected. Through this filtering, they were able to remove up to 71% of all microplastics in the fishmeal. Though promising, this still does not address the main issue of constant plastic input into the ocean.

Most studies reviewed by the authors could not conclusively claim that microplastic ingestion was harmful to humans. However, the authors stressed that more research is needed to conclusively determine the impacts. Microplastics are becoming more widespread and are now found in a variety of marine and land animals. In addition, we now know the process of making fishmeal adds even more microplastics to the food we consume.

Despite this grim reality, there is hope. The researchers found that microplastics could be extracted from fishmeal using salt-based solutions. These findings provide an example of the new resources available to companies to reduce the release of microplastic.

We all need to help to solve this problem by cutting down our consumption of single use plastics like water bottles and food containers. In addition, we need to do research on the clothing and personal care products we use, ensuring they don’t contain microplastics that will make their way into the ocean.

Aside from making personal changes like these it will be necessary for a much larger scale shift away from plastics. Corporations need to invest in finding new ways to package and deliver their products to customers, and as a society we need to cut back. Contacting and pressuring local policymakers to strengthen the guidelines for microplastic use in products is any easy step we can all take to force large corporations to be more responsible.

We need to keep funding research into our plastic problem. It is undeniable that plastic is present in our food, and the concentration is likely. We need to know how harmful it will be to consume. All the while, we must not forget to work together and reduce our impact, fighting against the increasing amount of plastic accumulating in the oceans. 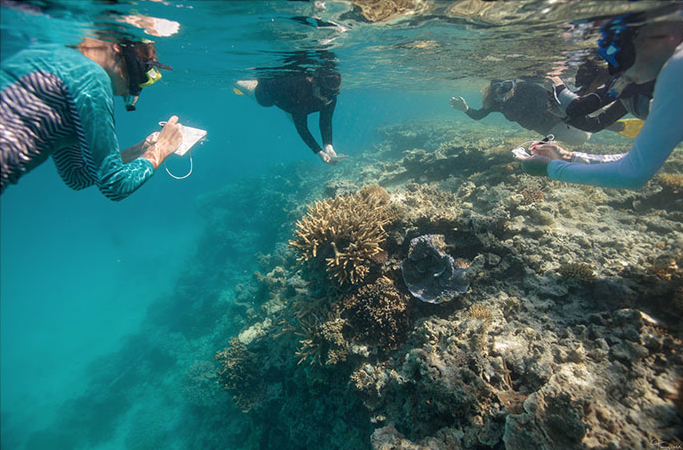