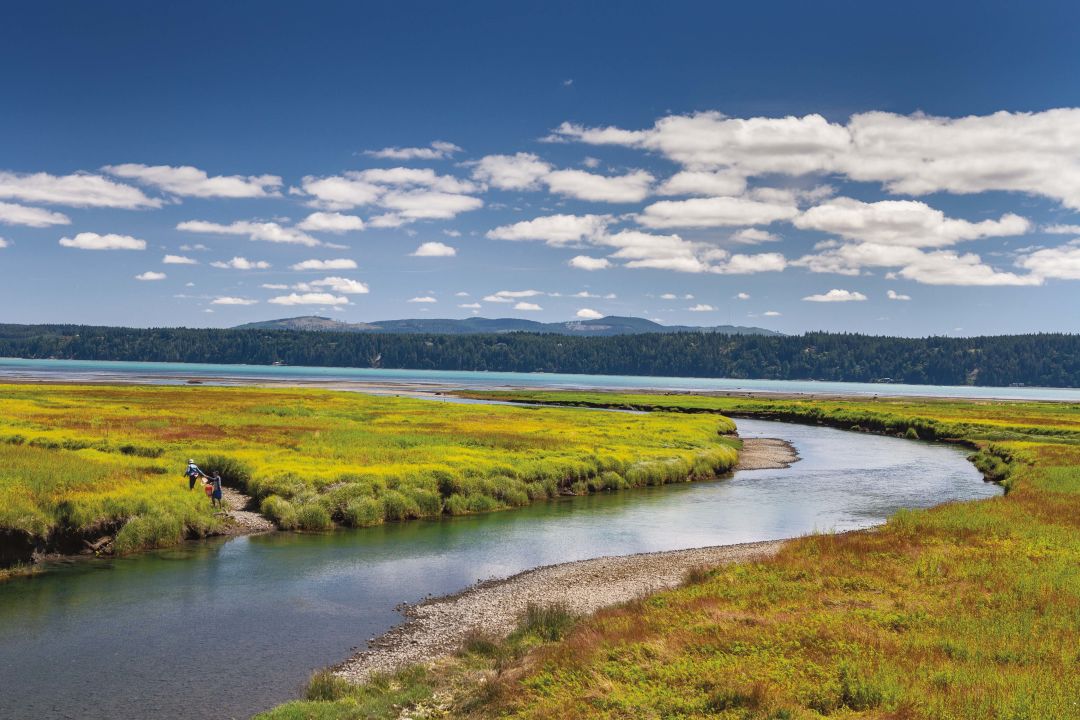 “Blue carbon” is the term used to describe the fraction of carbon locked in ocean environments. Most blue carbon is stored in the saline sediments of salt marshes, seagrasses, and mangroves. These environments are very important in slowing the pace of climate change because they sequester carbon in the ground that would otherwise be released to the atmosphere. Atmospheric carbon can become greenhouse gases such as carbon dioxide, which are contributing to increased atmospheric warming. As an added benefit, these carbon-sucking environments are also able to act as a buffer for coastal communities when storms hit by reducing the strength and height of storm waves. It is for these reasons, as well as to regain fish and wildlife habitat, that many recent conservation efforts have focused on protecting and restoring tidal wetlands.

On the west coast, wetlands appear in the form of tidal salt marshes, but around 85% of these environments have been lost. Historically, wetlands have been drained to create farmland, and this process releases the carbon stored in these environments into the atmosphere as carbon dioxide, contributing to climate change. Restoring wetlands, however, has the power to reverse this process by drawing carbon back out of the atmosphere to once again be stored in saline sediments.

Marsh plants draw carbon dioxide out of the air during photosynthesis. The roots of marsh plants, which are buried in the marsh’s saline sediments, then release carbon dioxide into the soil as they grow. Additionally, as roots die and decompose, the carbon trapped inside this organic material remains underground. Some carbon is released to the atmosphere during growth and decomposition, but overall, these plants take in much more carbon than they give off. This process, illustrated in the diagram below, is called “carbon sequestration” and means that tidal marsh restoration is an effective strategy for slowing the pace of climate change. In fact, coastal wetlands are the only habitats that can continuously sequester and store carbon in soils for millennia.

In an effort to close this data gap, researchers at Western Washington University recently published a study that compares the amount of carbon (carbon “stocks”) and the rates of carbon accumulation in a restored marsh to the carbon stocks and rates of accumulation in a nearby natural marsh in the Stillaguamish estuary in Port Susan Bay, Puget Sound, Washington. Their results present some good news – restored marshes are effective at storing and accumulating carbon.

Four years after restoration, the researchers found that the carbon stocks in the restored marsh sites were very similar to (but slightly lower than) the carbon stocks in the natural sites. Additionally, the rates of carbon accumulation were nearly twice as high in the restored marsh as in the natural marsh. This is due to the high rates of sediment accretion, or elevation growth, that began in the marsh after its natural tidal regime was restored. They found that the 60-hectare restored marsh will likely accumulate 4,500 to 9,000 Tonnes of carbon over the next 100 or so years of its growth at a rate of approximately 75 Tonnes of carbon per year. To put this into perspective, a typical car emits around 4.6 Tonnes of carbon per year, meaning that the marsh’s rate of carbon accumulation offsets the emissions of over 16 cars per year. This may not seem like a particularly large amount of carbon, but remember that the marsh will be able to sequester carbon continuously for thousands of years if left undisturbed; marshes are long-term carbon-sucking environments. Plus, many potential marsh restoration sites are several times the size of this 60 hectare research site, with areas of at least 500 hectares. When restoration is implemented on a large scale across the globe, these environments have great potential for lowering the amount of carbon dioxide in our atmosphere.

What does this mean for the future of restoration?

These results demonstrate that, when compared to a natural tidal marsh, restored marshes can quickly begin sequestering carbon at high rates and can store similar amounts of carbon in their carbon stocks. As an added benefit of restoration, the researchers found that the rates of sediment accretion and elevation gain were outpacing the rates of sea level rise occurring in the area. This provides hope that sea level rise will not drown the marsh in the near future, allowing the marsh to continue sequestering carbon from the atmosphere, buffering waves during storm events, and providing habitat for fishes and wildlife for years to come.

This research demonstrates the environmental benefits of restoring marshes. There may now be greater interest in marsh restoration from funders, allowing more marsh restoration projects to be implemented. Plus, having quantifiable values of the amount of blue carbon that can be sequestered in a restored marsh adds “carbon sequestration” to the long list of benefits of marsh restoration and provides further justification for restoration.