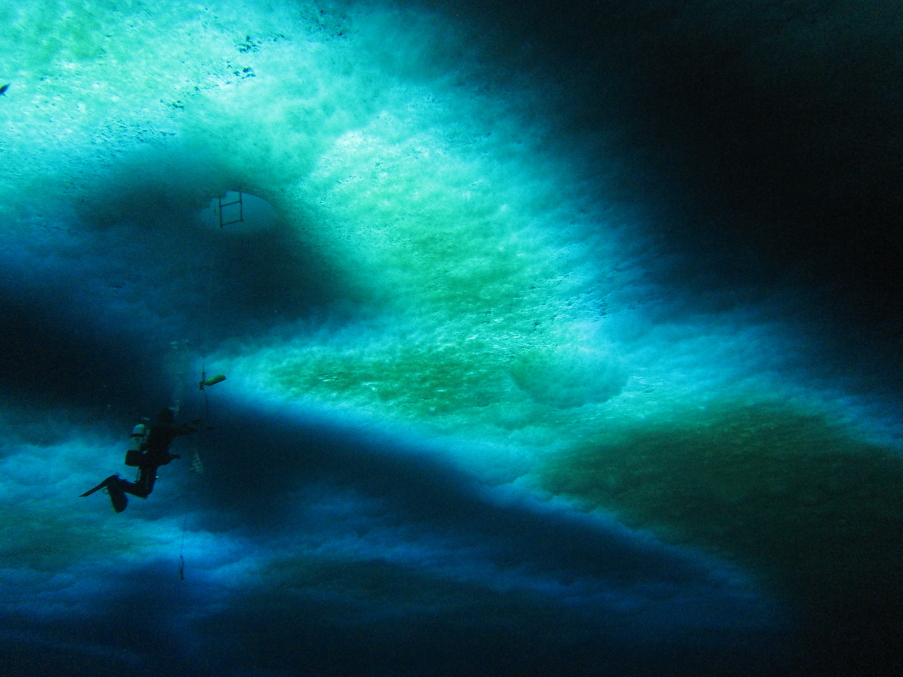 Ever wonder what winter is like for marine organisms? What about those that rely on light for growth? In a recent study of microscopic photosynthesizers in some of the most extreme winter conditions in the Arctic, a group of scientists set out to investigate.

Phytoplankton are small microscopic cells that photosynthesize using light to produce energy. Sure, you may have heard of phytoplankton before, but did you know these small cells can even exist in areas with very low light? What about underneath a layer of sea ice that can reach up to 9 feet thick? The phytoplankton of the Arctic can do this, and much more.

As nutrient additions to the water change with season, small microscopic photosynthesizers bloom in the spring and early summer. Although a majority of phytoplankton growth is expected to occur seasonally, there is very little evidence to support this pattern. Some of this lack of evidence can be attributed to difficult sampling, as waters under the sea ice are also harder to access during the colder winter months. Because of this concept of phytoplankton seasonality and lack of access to waters beneath sea ice, phytoplankton growth during winter months is rarely measured.

How to sample the Arctic

Researchers in a recent study set out to measure phytoplankton growth under the sea ice during the Arctic winter using an autonomous sampler. The sampler is known as an ARGO float and can sample based on remote instructions received from scientists. That means the float can operate autonomously and can send and receive information after surfacing. For this study, researchers programmed the float to avoid sea ice and sample water along different depths.

The float used during this study had sensors for environmental variables (temperature, salinity, etc.) and additional sensors to measure light levels and phytoplankton growth. Light levels were measured using Photosynthetically Active Radiation (PAR), or the range of wavelengths that photosynthetic organisms can use during photosynthesis. Phytoplankton growth can be measured in several ways; in this study scientists used chlorophyll a concentration (the main pigment used to absorb light in photosynthesis that all phytoplankton have) and backscatter (gives an idea of particles in the water column based off the way light reflects off of them). The Argo float combines all of these measurements with sensors that detect light reflection and absorption of different wavelengths to determine how much light was available for photosynthesis and how much phytoplankton growth occurred during winter in the Arctic.

What’s the deal with phytoplankton beneath the ice?

Researchers found phytoplankton growth as early as February under 100 % sea ice cover. These results are especially surprising because light levels were lower than the limit of detection on the sensor and below that expected for photosynthesis. However, the authors did show detectable cell growth and suggested systems and complexes used for photosynthesis need very little light for maintenance during winter.

Finally, some phytoplankton are mixotrophs and are able to produce energy from both photosynthesis (phototrophy) and by eating other organisms (heterotrophy). The capability of phytoplankton to do both is equivalent to a plant eating a small animal if they don’t get enough sunlight! Authors hypothesize heterotrophy by phytoplankton could be responsible for their survival during winter.

This study is some of the first evidence of consistent phytoplankton growth throughout winter months in the Arctic. Survival and growth of these phytoplankton play a big role in the total amount of cells accumulated during their summertime peak. Because phytoplankton survive at low levels during the winter, they might be able to quickly respond to favorable light conditions and create these characteristic large summer blooms. Phytoplankton in the Arctic play a critical role at the base of a short food web, providing food for larger copepods and eventually larger fish and mammals. As oceans warm and sea ice melts, this trend could change and impact seasonal phytoplankton growth at the base of the Arctic food web.