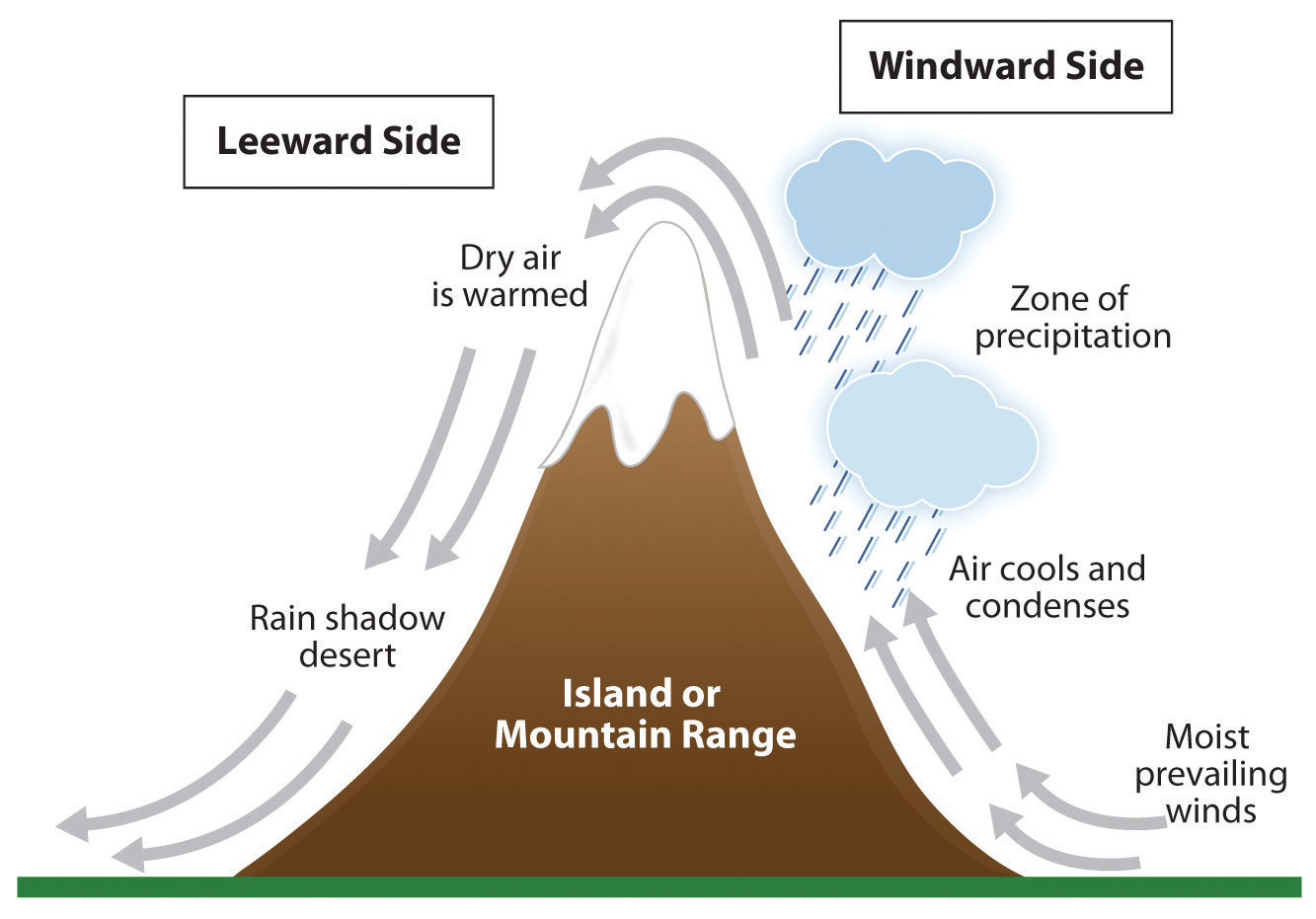 In my favorite Christmas move, The Year Without a Santa Claus, a warm town in the southern United States (aptly named Southtown) has lost its Christmas spirt. In order to save Christmas, a ragtag group of heroes must convince Heat Miser and Snow Miser to let it snow on Southtown. I love the ridiculous plot and catchy music from this old school Christmas movie. However, when I was a kid I had no idea that we could make it snow – even without the Miser brothers.

Unfortunately, we cannot make it snow somewhere like Southtown, but since the 1940s scientists and government agencies have been making snow in mountains to increase snow pack through geoengineering. This is done by “seeding”, or adding particles to clouds to help make rain, orographic clouds. Orographic clouds form from air being cooled as it moves up a mountain barrier. As you see in the picture below, as the air travels up the mountainside it cools and condenses forming clouds and, in some cases, rain or snow. As the air travels over the mountain it is warmer and drier than when it started which leads to desert conditions (the rain shadow) on the other side of the mountain. In the winter, these clouds are the target of seeding experiments because they’re common and have supercooled liquid water.

How do you naturally make snow?

Snow is formed when ice crystals form on ice nuclei, usually dust, and grow within the cloud. The ice crystals have to grow to a certain size in order to fall as snow, which doesn’t always happen – one reason why not every cloud in winter leads to snow. Natural ice nuclei need to be at about -12 oC (10oF) to make ice crystals. There also isn’t a lot of movement within these types of clouds which is needed to help the ice crystals grow by colliding into other water droplets.

Even though these winter clouds are often lacking in ice, they do have supercooled water. This water is colder than 0oC (32 oF) but it is still liquid! In order for water to freeze, water needs a particle to form the crystal structure around, called the ice nucleus or seed crystal. So, why haven’t you seen the water in your freezer become supercooled water? There are impurities in the water in your home freezer that give that structure for ice to form. (If you want to learn more about how this works and see it in action with an awesome at home experiment, check this out).

How can you make snow?

However, it isn’t as simple as just taking a handful of silver iodide and throwing it outside. Traditionally, silver iodide has been released from planes above the cloud level. More recently, ground based machines have been developed that will release the silver iodide into the atmosphere and (hopefully) make snow downwind.

Why would you do this?

States are interested in this process because it can help them increase their snowpack and spring melt. The spring melt is critical because this is where a lot of people get their drinking water from. Power companies are also investing a lot of money into cloud seeding experiments. The idea is that even small increases in snowpack could lead to a profitable increase in electricity from hydroelectric plants.

The study described here was funded by the state of Wyoming, and they ran a 5-year seeding experiment to test the potential snowpack increase. The study was conducted in two mountain ranges – the Medicine Bow and the Sierra Madre. These ranges are contributors to the spring runoff to the Green, Wind-Bighorn, and Platte River Basins. The silver iodide generators were set up at about 3000 m above sea level because that’s where the clouds they were targeting are. The seeding period lasted 4 hours to ensure enough silver iodide reached the clouds  and about 25 g of silver iodide per hour was released. Based on previous field work, this would increase the precipitation by 0.4 – 4.0 mm per event. This may not seem like a lot but it could increase the annual precipitation (as snow, rain, etc) by at least 10%!

How do you know if you changed anything?

As you can imagine, measuring the impact that artificially seeding clouds has on the snow downwind is really hard to distinguish from

natural snow. Control and experimental ground sites were set up over both ranges to record the temperature, relative humidity, wind, and amount of precipitation, with at least two precipitation gauges per site. While the authors of this study didn’t talk about sampling the fallen snow, other groups have developed techniques to collect and measure the snow in a lab for silver iodide to help distinguish natural and artificially made snow. Most seeding work to date uses the meteorological parameters recorded at the precipitation gauges and backtracking where storms came from to calculate how much snow was made through artificial seeding.

Did they make more snow?

Unfortunately, the final results of this study are not out yet. However, the preliminary work indicates that the seeded events increased the precipitation by 10 – 15%! This is in a similar range to previous work in this region. This could go a long way to increase the snowpack and power of hydroelectric plants. However, there is still a lot of scientific work to be done before we understand the full impact of altering the clouds to make snow. There is concern that by increasing the precipitation in certain areas it will disrupt the natural precipitation pattern leading to drier areas downwind, like the rain shadow in the first picture above. This is why we need these cloud seeding studies to understand the positive and negative impacts of altering the weather. Until we fully understand the consequences of our actions, we won’t be implementing any large scale seeding events – so you better work on your pitch to the Miser brothers if you want to guarantee a white Christmas!