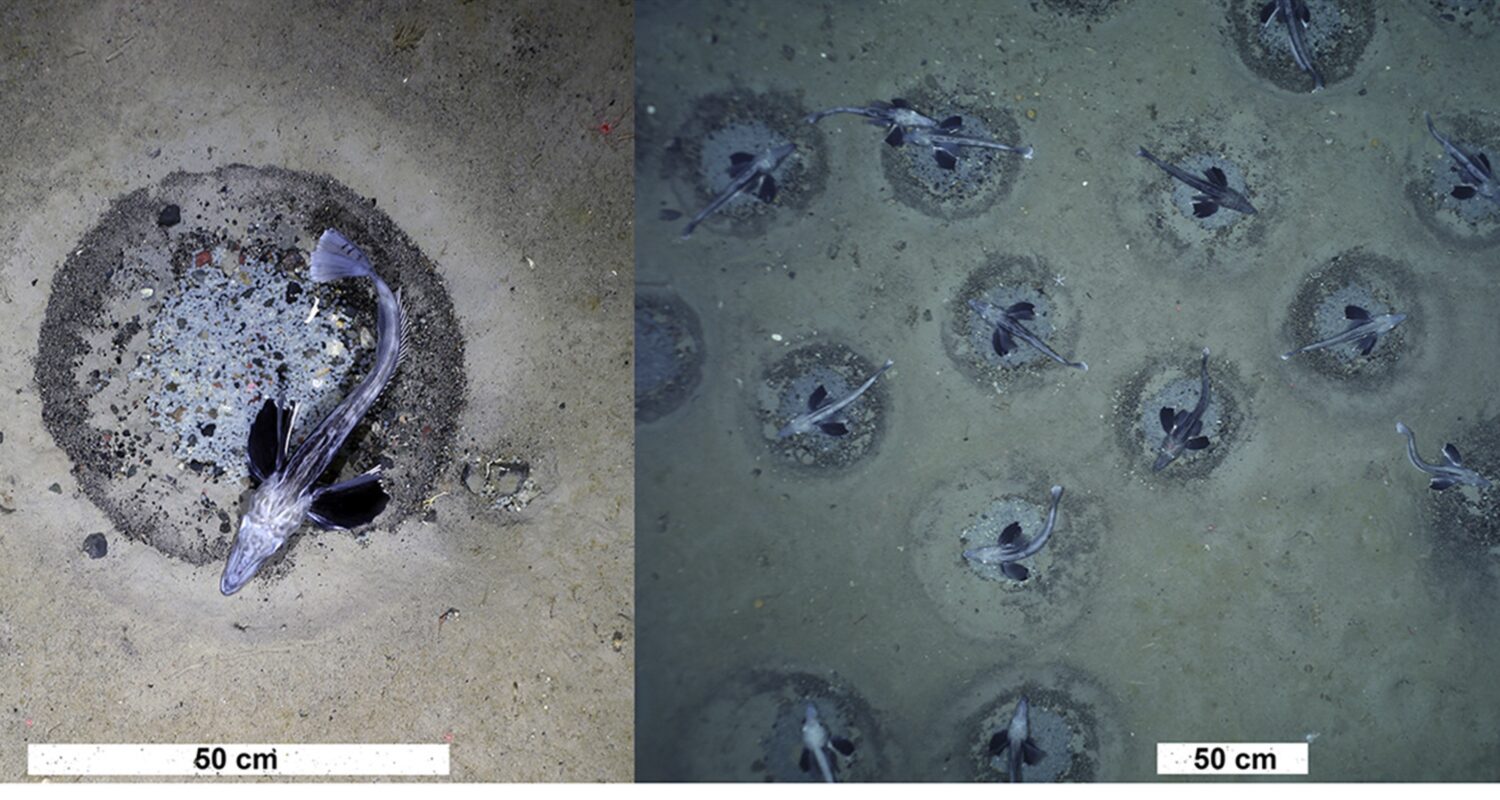 Scientists aboard a recent research trip to Antarctica unexpectedly discovered a vast fish breeding ground. In February 2021, the 47 person team set sail for Antarctica’s Weddell Sea aboard the RV Polarstern to assess how climate change could impact Antarctic waters (part of the Continental Shelf Multidisciplinary Flux Study – COSMUS). While conducting a video survey to characterize types of organisms living on the seabed, the researchers encountered something incredible: Thousands of fish nests dug into the seafloor.

The nests all belonged to a species of icefish (Neopagetopsis ionah), a group of fishes aptly named for their ability to live in  waters below freezing temperatures (many species have special anti-freeze proteins that keep ice crystals from forming in their blood in such cold waters).

While icefish nests had been observed on previous research trips, they were found infrequently and either solitarily or in small clusters – nothing compared to the seemingly endless stretch of nests the 2021 team found. During the team’s 4 video surveys of the colony, they found nests spanning 240 km2 (~90 square miles) – an area larger than the city of Seattle, WA! Using both video surveys and sonar surveys, the team estimated that the breeding colony contains 60 million nests, making this the largest fish breeding colony ever discovered.

The nesting ground, which was found in the Filchner Trough at depths between 420 – 535, was densely packed with bowl-shaped nests. The majority were actively in use, containing a male fish guarding around 1,700 eggs.

The nests within the breeding ground also had more eggs than has been reported for nests found at other locations, supplying further evidence that this region of the Weddell Sea makes an optimal breeding ground for these icefish. This could be linked to the slightly warmer temperatures found in the region, which – even at their -1 – 0 °C temperature – are around 1°C warmer than surrounding waters. The waters above the breeding ground also appear to have more plankton and food particles in the water than in surrounding areas, likely fueling the food-web at the bottom of the ocean where nesting fish aggregate and potentially providing a food source for newly-hatched icefish.

But the nests also appear to fuel the ecosystem. The researchers found traces of dead icefish carcasses, which became meals for starfish, brittle stars, octopods, and other fish in the area. Additionally, researchers found less-mobile animals (like sponges and tube-dwelling worms) inside unoccupied nest sites. It appears that the bowl shape of the nests collects food particles that sink down to depth, making the empty nests a great habitat for particle-feeding invertebrates. When researchers looked at previously collected movement data from tagged seals, they found that Weddell seals frequently visited the newly discovered icefish breeding ground. It is quite possible that these seals, or other marine mammals, forage in the large fish breeding ground.

The unexpected finding of a massive fish breeding ground highlights the discoveries still waiting to be made in our oceans, especially in remote areas that can be difficult to study. Scientists were left with more questions than they could answer during their research expedition. Luckily, they were able to set up two cameras with environmental monitoring systems within the breeding colony that will be deployed for two years. The scientists hope to answer questions about breeding frequency and behaviors of icefish, and to better understand how the breeding ground is used by other animals.

The scientists also hope their discovery of an unprecedently large breeding aggregation, supporting over 60,000 tonnes of fish biomass, will provide impetus for establishing a Marine Protected Area preserve the breeding ground and surrounding ecosystems.